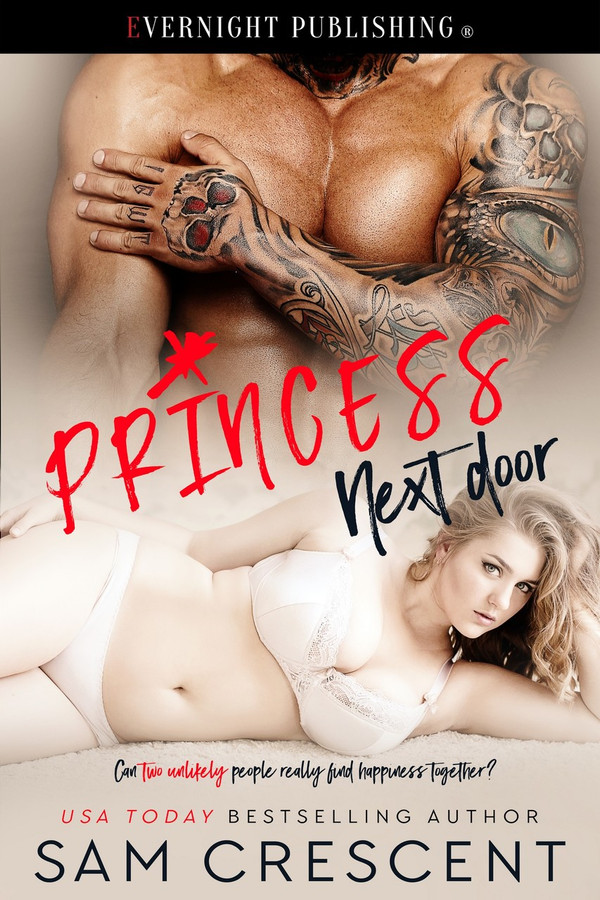 Wynter Griffin has finally found her independence after years of being controlled by her parents. The only problem with her newfound peace? Her partying, rock music listening neighbor. She’s at the end of her patience, and demands that he packs up the noise, or she’s calling the police.

Zane Webster likes his neighbor. Her blonde hair, blue eyes, and sweetness remind him of a princess. All she has to do was ask, and he’s more than willing to give her what she wants.

Guilt eats away at Wynter, and it’s not long before she makes friends with the bad boy. After getting drunk one night, she lets it slip that she’s a virgin, and in desperate need of shedding that title. Zane agrees to help, providing they do it at his pace. With Zane, she can finally live her life to the fullest. He even teaches her how to fall in love.

But what will happen when her parents demand she grow up, and do as she’s told? What will Wynter choose? Can two people so different find happiness together?

His dick was more than happy with the idea of helping her. He wanted to get her naked, spread those pretty thighs, and be the first and only man to taste her creamy pussy. She would be so wet by the time he got his hands on her.

He needed to keep his head in the game; the one he actually used to think with.

“I need to think about this,” he said.

“You know what, I’ve thought about this.” He stepped up close to her, intent on kissing those sexy as fuck lips only to stop. “I want to kiss you right now.”

“I don’t want you to say things you don’t mean, or what you think I expect you to say.”

He pressed a finger against her lips. “I also don’t want you to keep playing nodding heads as we’re kissing.”

He moved his head from side to side in the way he meant, and she covered her mouth laughing.

“I’ve never seen that before.”

“It happens. Just close your eyes, no tongue, okay.”

She held her hands up. “Fine.”

He waited as she stood, closed her eyes, and puckered her lips.

“I feel like I’m taking a test or something.”

“Consider it a test.” She stopped puckering, and he took a step toward her. He touched her cheek, and when she opened her eyes, he told her to close them.

She did as he asked, and he tilted her head back. Her skin was flawless, smooth, and he stroked his finger over her cheek, moving around her ear, and back down to her chin. Her lips parted a little, and he slid his other hand up from her hand, cupping her face.

Moistening his own lips, he took possession of hers, and listened as she sighed his name just before he did.

The moment he kissed her, he felt like his world had been turned upside down and inside out. He lost all focus apart from her.

His need for her was so great, greater than anything he’d ever experienced before in his life. He wanted her, craved her, felt consumed by his need that rivaled his love of music.

Sinking his fingers into her hair, he deepened the kiss, and his cock thickened. Moving her back, he pressed her up against the wall, relishing her hands on his body, and he held her close.

He didn’t want the kiss to ever end, but a knock on her front door halted it.

Pulling away, he stared into her eyes. Her cheeks were flushed, and there was no way he could ever let another man taste her sweetness.

“I’ll teach you everything you need to know, Princess.”

Sam Crescent proves why she’s my go-to BBW romance author with this fantastic sweet and sexy romance. Wynter Griffin is a wonderful heroine! She has a kind heart and a strong personality. She isn’t a pushover but neither is she obnoxious. She is a genuinely good person. She’s a curvy heroine worthy of the title. Zane Webster is a laid back fun guy. Seeing how serious he becomes over Wynter was a pleasure to watch. His actions and reactions were entertaining and enlightening. The supporting characters in this story were not only entertaining but they let me see facets of the main couple and revealed personality traits that let me get to know them all the more. I loved revisiting the premise of the houses helping their relationship along. I enjoyed the intensity of the romance and the emotions of this story. It was fun and fierce and I lost myself in the pages. Pick this one up for a fabulous read. The Story: Wynter Griffin is happy to finally move in to her own place and start living by her own rules but her first meeting with her new neighbour doesn’t go well. Thankfully Zane Webster isn’t one to hold a grudge and soon they are getting along better than Wynter could have ever hoped. But is there a future to their relationship?

This was a great book ! Sam Crescent always delivers a solid story with loads of romance, hot sex, and excitement. I loved Zane and Wynter. Sparks flew from the first moment they met. Zane was the noisy neighbor next door so Wynter had to confront him about his partying ways. I loved their instant connection. What I really liked was Zane and how slowly he built the relationship from friends to lovers and then on to the real thing. It was sweet and really it was how they could overcome all the doubts that seemed to pop up from everyone. This was a sweet and sexy romance. The characters were great. Zane and Wynter grabbed my attention and my emotions. Sam Crescent never fails to deliver vibrant characters and amazing stories and that is what keeps me coming back to this author time and again. I enjoyed this book and look forward to many more books from Sam Crescent.

I loved this book it&#039;s all things amazing I love the characters the fun witty storyline is fab.

What a great read! Devoured this sexy, witty,...did I mention sexy?! Sam knows how to deliver.

Miss Crescent thank you for the fixed, it&#039;s just what I needed. I&#039;m very happy with the outcome and happy to see the old couple, can&#039;t wait for your next book .#SAMCRESCENT

I waited anxiously for this book to come out and it didn&#039;t let me down. Zane sounds sexy and Princess adorable.

This book was great. I thought Princess &amp; Zane were adorable together. Sam Crescent has such a way with words that keeps you turning pages to see what comes next. And you want the story to keep going!!

I&#039;m glad to get this book, because I was curious about this couple after the mention at the end of F☆cker Next Door. Which, you don&#039;t need to read before this one, but I really recommend to get it. So, this story was pretty good. Zane and Wynter has insta connection. They soon becomes friends. And then something more after Wynters propositioning. Zane was great. I loved him. He gone after his Princess without any doubt. I loved that. And Wynter... Well, I was worried there for a second, that she wouldn&#039;t be able to shake her controling parents and will let them to interfere and make her to lose something special she found. But Wynter found her path, her happiness, and she wouldn&#039;t ever let anyone to take it away from her. And the epilogue... It has that part like F☆cker Next Door. The possibility of future story. And damn, I need it! PS... Zanes friends. At the beginning, I wasn&#039;t happy much with them. But then they grown on me. Lol. They were great friends, despite that sometimes I wanted to slap them. But I hope, they will get a chance to tell their own stories in the future.

Hitman Next Door by Sam Crescent