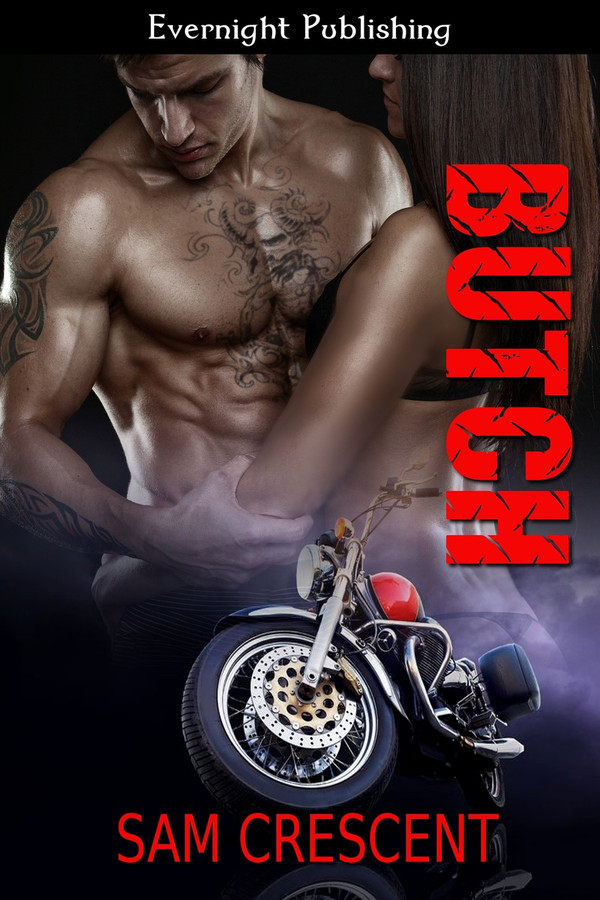 Danger is heading to Fort Wills...

Leaving The Skulls was the best and worst decision of his life. Butch knew to keep his woman, Cheryl and her young son safe, he needed to make sacrifices, and pulling out of the club was the only way to go. Cheryl loves Butch, but she will not accept him quitting the club. She doesn’t need him to become a saint in order to love him.

Butch cannot understand that and is more than willing to make any sacrifice necessary for Cheryl, but now those very sacrifices are about to tear apart everything he’s ever known.

With a new threat facing them and no way for him to protect his woman, Butch has to make a choice. However, Butch is not all that he seems. He’s got a past that even The Skulls don’t know about, and no one is safe.

Life as The Skulls know it is about to be blown apart.

“Do you want to come in?” she asked, finally finding her voice.

He stepped through the door, and she moved out of the way for him to enter. “Thanks, babe. Dinner smells amazing.”

She smiled. “Thanks. I’m about to dish up. Do you want to come on through?” Crap, she was starting to sound like some waitress.

Butch caught her hand. “You’re not getting away from me that easily.” The door was closed, and he pressed her against it. “Where’s Matthew?”

Was he going to kiss her? She didn’t know what to expect, and the anticipation was killing her.

“I didn’t. Matthew loves spending time with my mom. She loves having him. I thought it would be nice for us to be alone.” He cupped her cheek, and all thought fled her mind at the contact. His palm was rough from years of hard work. Butch wasn’t shy about work.

“Yes.” The word came out as a croak. He was invading her privacy, and her body was coming alive after years of being kept asleep.

“I’ve been thinking about doing this all day.” Butch leaned in close. His breath fanned across her face, making her moan. Tilting her head back, she ran her hands up his chest wanting more than anything to feel his lips on hers.

You’ve known him long enough to want this. Don’t feel guilty for wanting this.

In that moment with his lips mere inches from her face, she didn’t give a shit either way. His lips were on hers, and she was in heaven. Tugging at the strands of hair at the back of his neck, she moaned at the feel of his hard body pressed against hers. Closing her eyes, she melted against him. The hand on her cheek sank into her hair, tugging on the strands while his other gripped her hip tightly.

Lifting her leg over his hip, she felt the hard ridge of his cock pressing against her core. His tongue plundered her mouth as she rode his body. All sense left her as her body took over. She knew what she wanted even though her mind was trying to fight.

This was a really good book. There was a threat from Butch&#039;s past that came back to haunt The Skulls and Chaos Bleeds. Butch tries to do right for his new girl Cheryl. Cheryl doesn&#039;t want Butch to quit The Skulls, but he is too bullheaded to listen to her. There is a lot happening and Butch has to make some tough decisions. Cheryl has some shocking news of her own and Butch is there to help her deal with it. This is a really good series and I can&#039;t wait to see what happens next with Gonzalez.

I love that each book in The Skulls series builds on the prior one. The one thing about this story that bothered me was that the MC kept pushing Butch to come back and then when he was willing they wanted to put it to a vote. This book had a great mix of suspense and romance. The main and secondary characters were mesmerizing. This book kept me on my toes all the way through. Just when I had it figured out, a twist was thrown in. Overall, this was a delightful book. I cannot wait until the next book. I found this book was very well written with an interesting plot. Butch was a member of The Skulls. He is willing to leave the only family he has to put the one woman and her son that he had come to love and care for first. While it’s a mixed bag of the best and worst decision of his life, forces beyond his control draw him into a game where he needs The Skulls help. Cheryl has fallen in love with Butch and does not mind that he is a member of the Skulls. She also loves how he spends time with her son. It does not seem to bother him that he is another man’s child. Cheryl is willing to push Butch to go back to the Skulls if that makes him happy. The connection Butch and Cheryl is intense. The chemistry between them is off the charts. I loved that Butch in his own way tried to put what he thought Cheryl would want first above his own wants and needs. The sex scenes were hot. These two make a great match together. Butch is the seventh book in The Skulls series by Sam Crescent. This book is part of a series and I find it best read as part of the series. There are characters, plot and events overlap as the series continues.

Another great book in this series. I kind of wanted to knock Butch upside the head through most of the book and the ending kind of leaves you hanging but definitely a great read! Can&#039;t wait to see what comes next for the Skulls!

please don&#039;t let this be the end OF the skulls I just love them.... and more of chaos bleeds plz... bitch had a great story I want more more more

Loved it! Book was awesome and so can&#039;t wait till the next book!

Well...I don&#039;t know where to start. There so much happening. So much twist. Sam really outdone herself. Well probably start with the books star - Butch. He was alpha hardcore and also so sweet with Cheryl and her son, Matthew. But so stuborn, like broken record: &quot;I&#039;m not coming back&quot;. Blah blah blah. Made me wanna bash his head more than one time. Actually the rest of the Skulls get there too. After all the s**t going on in their life, they should bond more and less fight between each other. God! Stuborn old boars. Cheryl at first looked to me like she was too meek for being an old lady. But I was very glad that first impression was wrong. She got a lot of fire inside. The way she so easily accepted into her small world Butch and his family, The Skulls, was so heartfelt. She was really an awesome character. Though short visit it was I fall for Pu**y aka Shane. The man always make some light into the hard situations every time he opened his mouth. LOL The Matthew&#039;s mistery of the father made me a lot to speculate. I just knew theres a reason for not mentioning him a lot or his name. This was an unexpected twist. And even though at first I wanted to kick him because of his action&#039;s and word&#039;s, in the end he kinda redeemed himself. How the story unrolled I feel so sorry for Ashley and in return for Chaos Bleed&#039;s crew. And the enemy. Frederick Gonzalez.God he made me so mad. I have all kinds of plans in my head running with how torture and then finish his life. Yup, Sam, made me sadistic, blood tirsty lady. Sam minds working just blow my mind. So intriguing and so much twist&#039;s in the end and full of complex, that I just don&#039;t know now what to expect next. I just so can&#039;t wait for more, that my eyes are twitching.

All I can say is Simply Fantastic. This is book 7&#039;in the Skulls series. This is Butch and Cheryl&#039;s story and what a story it is. Butch is a member of the Skulls and on the outs with the club by his own doing. Cheryl is a single mom working in Fort Wills where she meets Butch and her whole world turns upside down. Butch is torn between his love towards Cheryl and her son and his loyalty to his club. When demons from Butch&#039;s past come back to haunt him and the club Butch will do just about anything to protect her and his club. There are many twists and turns and a lot of OMG moments but you can&#039;t wait to turn the page to see what is going to happen. If you are looking for a MC series will keep you coming back for more this is the one you want to read

So much on the horizon!!! This story was so much fun to read! While there is a lot to keep up with, new characters, new story lines, and a new MC, this book paves the way for an amazing continuation! The only thing that I didn&#039;t like was how Butch couldn&#039;t ever seem to make up his mind about going back to the club or staying out. He kept changing his mind and couldn&#039;t make a decision, but that was a very small issue. The twist and turns in Butch, I didn&#039;t see coming! I love the one with Alex!!! So much happens in this books that sets up the course for more stories to come! I can&#039;t wait for Whizz&#039;s story. He is such a broken soul and deserves to heal.

Christmas Comes Butch Once a Year by Sam Crescent