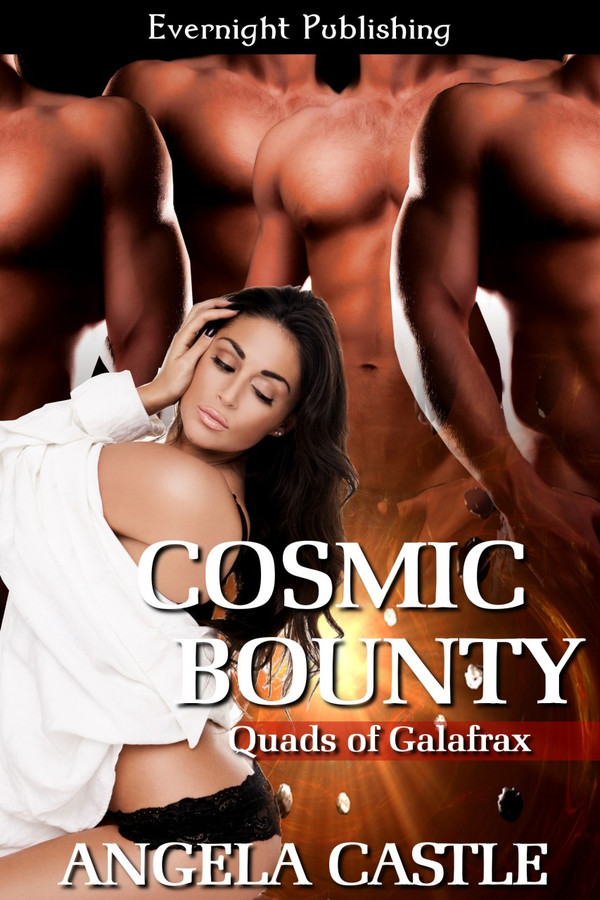 Galactic warriors Gol, Hul, Riv and Ric of Galafrax, rescue a shapely female from a slave trader, while wandering the interspecies market. Her pale beauty stirs their lust, and her accepting nature softens their hearts. All four brothers agree she belongs to them—forever.

Stolen from Earth by greedy alien traders, Kat is sold to not one, but four, large muscled, alien soldiers. She’s shocked to discover they plan to share her!

With their sexy red skin and gentle seduction, Kat finds it impossible to resist. All too soon, she loses her heart to the brothers. When they take her to Galafrax, she struggles to learn about her newly adopted planet, but other forces seek to tear her from the men. Her quads will do anything to get her back between them, where she belongs.

The female stared up at him, her eyes wide, weariness and fear mixed in her clear green depths. She nibbled on her lower lip, and her small body trembled in his arms. He liked the soft silky feel of her against him. He wished not to be wearing his battle uniform, to reap the full effects of her, as he held her tighter against his chest.

“Do not fear us, you are safe now,” he attempted to reassure her.

Gol breathed in her scent; he’d never scented anything so fresh and sweet in all his days. His arms tightened around the small, trembling female.

“Disperse, there is nothing more to see here,” barked Hul to those who still watched. The crowd was quick to go back to its business, though a few still cast them lingering glances.

Gol turned back to the seller, unwilling to put down the female in his arms. Her small body was soft, yet so very warm.

“I want her bonds undone.”

“My lord, perhaps I should warn you…”

“Did you not hear his order, seller?” snapped Hul.

Gol set her on her feet with one arm around her small waist, as the seller hurried and with trembling hands complied.

“Be it upon your head, my lord, but let it not be said I did not warn you. The female is dangerous.”

“Dangerous?” He swept his gaze down the female again. The only thing dangerous he could see was the ability to make him ache. In the past, he lusted after a female, but never one who affected him like this, her every little movement, every little, soft whimper, or daring glare. It drove him almost beyond reason, wanting to throw her down, right here and now, take her, claim her.

With her wrists free, she immediately rubbed them.

He placed a finger under her chin, tilting it up to remove the voice inhibitor from her throat. He tossed it at the Jorval, who caught it, before tucking it into his pocket.

“Are you dangerous, little pet?”

“Only to those who piss me off,” she said, her voice soft and husky.

It washed over his body, sending more blood into his rod, making it throb almost to the point of pain. A pain he welcomed, as he mentally battled to stay in control of his body. I am a soldier, I will not lose control. Gol clenched his fists, holding himself rigid, repeating his words over and over in his mind.

She rounded an angry glare in the seller’s direction.

The seller's slit eyes widened, and he retreated into his stall. Gol let out a burst of laughter. The woman jumped back, surprise registering on her expressive face. Gol let go of her, and she stumbled back several paces and tripped. Hul moved in quickly, catching her before she reached the ground.

“Ahh, thank you.” She glanced up at him.

Her pretty, delicate, eyes brows knitted together in a frown. She shrugged out of Hul’s arms.

Gol could see Hul was just as reluctant to let her go, but did so. They both watched as she wobbled on her feet a little, before steadying herself. She straightened, glancing between them.

“Um, would you excuse me a moment?” she asked, though her tone suggested she cared little if they did.

The brothers nodded. The little female stalked after the seller, disappearing into the shuttle. Gol and Hul glanced curiously at each other. Not worried she was trying to escape, as there was no way out of the shuttle pod, except the way she went in. “I’ve never seen the likes of such a female. She is so similar to ours if not for how pale, soft and small she is,” Hul noted. “I want to test to see if she is compatible, then we can…”

A loud crash and a cry of pain made the brothers jump into action. Gol shoved his way into the shuttle first. He stopped in his tracks to see the female standing over the seller, who groaned with blood trickling down his face. The little female held a piece of pipe in her trembling hand.

“Next time, you’ll think twice about abducting a human, you alien son-of-a-bitch!” she screamed and kicked the Jorval with her unclothed, delicate foot. The Jorval seller squealed in pain; she kicked him right in his sex organ. Even Gol could not help but wince.

“I think we may have bought a fire viper.” Hul chuckled with amusement, peering over Gol’s shoulder, watching from behind.

With a heavy sigh, she tossed the pipe to the side, and Gol relaxed his stance. At least she had not planned to attack him with it. He did not want to harm his new little pet if he had to disarm her. She rummaged around the junk the seller had piled up, before pulling out a square bag, which looked to be covered in a dark, red, synthetic material. The color was almost the same shade as Demos skin. She placed it down on a nearby bench and opened it.

They watched in fascination as she pulled out garments, before ripping off the sheer material she had been dressed in. The sight of her completely naked threatened what little control Gol had maintained over his body. He was barely able to contain his groan of pure want. Hul was not as subtle; she turned her bright green eyes on them at his brother’s lustful growl.

“Don’t even think about it,” she snapped, covering her pale, soft skin with fabric. Tight cloth now covered her legs and lower half, while a top covered her full breasts.

How was Gol not to think about it? She was a beauty, with such soft pale skin, her every lush curve begging to be touched, licked and explored, until she writhed under his touch and begged them to sink their hard rods into her. There was no way to control such thoughts.

Everything and everyone else be dammed to the ice. Control! He had to maintain control for her sake and for his. They still had no idea about this female, her species or even if she was able to take them as lovers. But the mere thought of it had him achingly hard.

“Are you two big guys twins?” she asked, slipping on thin looking foot coverings, her gaze wary while she studied them with half an eye.

“We are two of four,” Hul answered.

Abducted from her planet, Kat was fortunate to at least have a suitcase. Finding herself on the intergalactic auction block being fought over by aliens is just the last straw. When she is bought and freed from her restraints she lets her initial abductor know just how she feels by kicking him in the balls. At least she thinks they were his balls. Anyway, she’s now the property of four large red skinned aliens who look humanoid. She’s a large woman on Earth but next to these guys, she’s like a young girl next to a grown man. Are they anatomically compatible and if so, what do they plan to do with her? Quads Gol, Hul, Riv and Ric of Galafrax are ecstatic. Not only is their new pet compatible, she’s submissive and acquiescent. Used to fighting for sex they gorge themselves on her luscious body. But their pet has a mind and she makes it known she won’t be used. Will she consent to be their bride? This had a few lines that had me rolling, especially the reference to large cucumbers. That aside, this was well-paced and had plot, tension, danger and of course sex, sex and more sex. With big red men who pander to Kat’s every need and whim. A fun mental siesta.