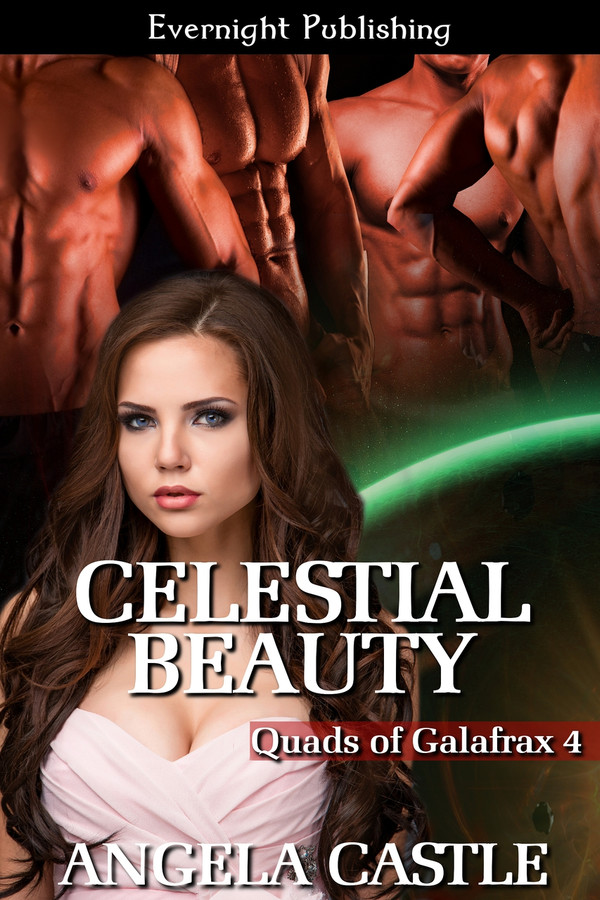 Forced to land their scavenger ship on a remote planet, the last thing Demos quads Zeb, Raz, Kue, and Loc expect is to find is a lovely and feisty human female.

Celeste has survived a life of abandonment and abuse on Earth, being abducted by cruel aliens, and the ship crashing on a strange planet. But can she survive four sexy red alien men, intent on rescuing her and making her theirs?

To win her trust, the brothers make her a part of their crew, assisting in the repairs on their ship. Their friendship blooms into a heated passion that Celeste never thought possible with four alien brothers.

When their new bond is threatened by the very aliens who abducted her, her quads reveal some unique hidden skills, showing just how capable they are at protecting the woman they’ve come to love, no matter the cost.

He was so close, but still didn’t feel close enough, so she whimpered, clawing at his hot skin, her body aching, begging for him. He suddenly pulled from the wall making her squeak in surprise. But he held her firmly, keeping her drugged and lightheaded from his kisses, and her fingers ran along the contours of his muscular shoulders. It felt so damn good, nothing like she’d ever experienced before. Her last lover had been flabby, and her ex-husband, who was overweight, was nothing compared to Zeb. How she loved his rippling abs and the strength in his arm as he held her easily, before lowering her down on to his massive bed. He pushed her flat, his hands skimming up her legs and over her stomach. His hands seemed to explore and worship her body, awe and desire swirling in his golden depths.

“I had no idea you were this soft, so pale … your majestic peaks.” His hands reached for her breast. She gasped and moaned as he squeezed. “Your skin is so sensitive.”

Through her lust-drunk haze she realized he had never been with a human woman before. When he pushed her legs wide to gaze between her legs, heat scalded her cheeks. She’d never been this exposed or on display for someone. Fear took sudden hold and she tried to close her legs, but his low grow made her freeze.

“Do not be afraid. Let me explore your beauty, Celeste. Your body is now ours, and I want to know everything about you. There is nothing here that I do not already love. See how much I burn for you.” He grabbed her hand guiding it down to his long, thick cock. She wrapped her smaller fingers around his hot, flexing shaft. Soft yet so hard, and all for her. He groaned when she tightened her fingers.

“Yes, beauty, see the power you have over us.” He gently removed her hand. “It’s best if you limit your touch, as I need you too badly and it may end before it starts.”

Her fear melted, and she couldn’t help the small giggle.

“Now keep your hands here.” He gripped her wrists and placed them above her head. “You will allow my exploration.”

“Yes, commander.” She smiled up at him.

He growled low, and his head fell to her right breast, making her back arch, but he kept one hand on her chest, pinning her down as he suckled and tasted, before moving to the other.

His attention shifted lower, moving between her thighs. He stared at her open pussy, his hands carefully peeling back her outer labia, running his hand down over her clit making her gasp and buck as pure pleasure shot through her.

“I have heard of this. Your klei so readily accessible and extremely sensitive.” He grinned then lowered his mouth to her pussy. He played with his tongue flicking all over her slit before dipping into her hole, lapping at her freely flowing juices.

Celeste’s head thrashed, and she reached up to grip onto the sheets, moaning loudly as the pressure built in her body.

She knew this, had felt this before … but it had always faded.

He kept her pinned as he continued to suck and fuck her with his tongue until that pressure exploded, making her whole body jerk. She cried out as pure pleasure washed through her. “Zeb, oh Zeb, ooh God!” It was all too much, but still not enough. More, more.

She groaned as he lifted his head, licking the wetness from his lips and chin. “Feasting upon you, I find you taste beautiful, so addictive. How easily you were brought to the peak.”

She groaned, her muscles utterly relaxed as he crawled up over her, and for the first time she saw worry in his eyes.

She swallowed down her laugh, reaching up to caress his face. “Yes, but you’re not done yet, handsome.”

He released a breath, and grinned, “You are right. I need you badly, so with your wetness and my lubrication, I pray by the Fire Gods you shall be able to take me.”

“Then what are you waiting for?” She slid her hands up over his hips. Her challenge relit the carnal fire in his eyes. Too easily he pushed her back down with one hand.

Karla’s Take: This was a really good story and i enjoyed the dynamic between the characters… I mean really who doesn’t love a Menage with sexy aliens… I know I do and let’s be honest 4 hot guys giving you everything you need, I’ll take it everyday lol… Celeste is from earth and finds herself fighting for her life. I definitely like her because she is fighter and makes her opinion known…

Fun and entertaining as always. I look forward to the next story and hope that it will be released soon

Another fantastic installment of the Quads of Galafrax! Angela Castle has done it again! the beautifully written book excites and entices the mind.

Another wonderful story to add to my collection. I love this series and am always impatient for more. The quads are so hot, and wouldn&#039;t you just want your set I would. Please hurry and write more Angela Castle your fans are waiting.

Yet another great sexy story by Angela Castle! Love the Galafrax Quads. Makes me wish I was going to get found by some sexy quads and rescued. This lady is a surviver for sure even before she was taken from Earth. Found by a set of quads she has to accept that they want her and find her beautiful. Great sexy scenes and fun adventure. Looking forward to the next one, no pressure or anything .