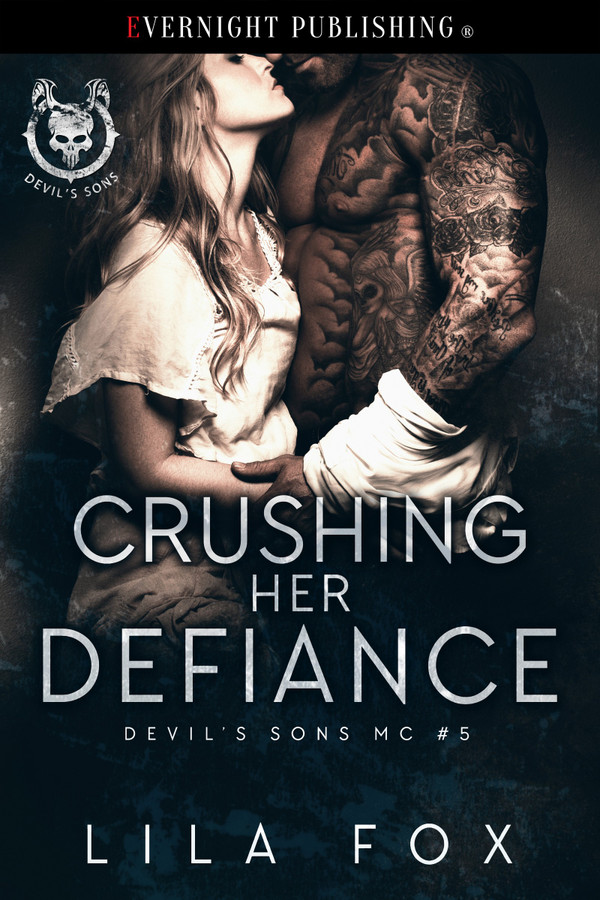 Chelsea has been on her own for a long time, and no matter how many times she tries to connect with people, they always walk away. When Crush barges into her life, her defiance seems to spark something in him. He won’t leave her alone. She doesn’t want him to, but she is reluctant to tell him the attraction is mutual.

Crush’s first look at Chelsea strikes him right between the eyes. How could someone half his size who looks like a fairy knock him on his ass? For God’s sake, she even has dimples. Once he gets to know her, there’s no turning back for him. She will be his, no matter how much she defies him.

Chelsea rolled out of bed, cursing when someone pounded on her door. She glanced at the clock as she walked out the bedroom door.

Fuck, it was two-thirty in the morning, and she had to get up at six.

The pounding started again when she got to the door.

“Knock it off. I’m opening the fucking door,” Chelsea yelled. She yanked the door open and saw three huge bikers staring down at her like they’d never seen a woman. She knew she should have been apprehensive, but she was too tired and too pissed to care at the moment. “What in the hell do you want?”

One of the guys elbowed the one in front.

Her eyebrows rose. “Interesting names. Now, what do you want?”

Crush scowled down at her. “You’re a little prickly for a small person.”

She’d had to deal with chauvinistic men most of her life. It didn’t help that she worked mostly with men because of her chosen profession. Ninety-nine-point-nine percent of men made up for the workers in the construction field.

She poked him in the chest. “Did you come here to insult me, or was there a purpose? Because you’re just pissing me off.”

Crush glared. “Woman, are you fucking dense? You open up your door in the middle of the night, and you didn’t check who it was first, dressed in a t-shirt, and then try to antagonize the three large bikers.”

She frowned. “What are you, the neighborhood watch?”

“Fuck no.” Crush wiped a hand down his face. “Hell. We came to pack up Lindsey’s things, and you need to watch the attitude.”

Chelsea’s heart sank. Dammit. She really thought she and Lindsey were hitting it off, and she was hoping she’d stick around for a while, but she didn’t last a month before Chelsea had scared her away. What the hell was she doing wrong?

“Dammit, come in. Her bedroom is the first door on your left.”

The men stepped into the apartment.

“Couldn’t you have waited until morning for this?” she asked as she closed the door.

“Nah, our prez doesn’t like to wait to get things done,” Ax said.

She snorted. “Go ahead. Try to keep quiet. I have to work in the morning.” She turned and walked off, feeling like they watched every step she made. After closing the bedroom door, she leaned against it and closed her eyes.

Fuck. Nothing was ever easy for her. Yeah, she’d made some choices for herself that made her life harder, like working in construction, but they were the best ones for her. It was what she loved to do and what she knew because of working with her grandfather for so many years. She didn’t have to guess that it would be difficult for her because she’d get shit from the guys, but too bad. She could handle it.

To hell with it. She’d deal with it like she did every other thing in her life. With grit and determination, it had never let her down yet.

Crush watched her bedroom door close and stayed frozen. The woman was over a foot shorter than him and tiny to boot. She had long, silky, light-brown hair that seemed to float around her little body and dark-brown eyes that made his gut clench. Fuck, put a pair of wings on the woman, and she’d pass as a fairy.

“Lindsey said just pack the things that were in her bedroom,” Bull said and headed that way.

Ax slapped him on the back. “What’s wrong with you, man?”

“How is it possible for someone who’s half my size and looks like a fairy to have enough power to knock me on my ass?”

Ax threw back his head and laughed. “You do look like someone punched you upside the head.”

“It fucking feels like it. Jesus, she even has cute little dimples.”

Ax rolled his eyes. “Come one. Let’s get this done. You can flirt later.”

They packed up the room within thirty minutes. Crush was heading back in the door to get another box when his phone rang.

“Yo, boss. What’s up?” Crush asked when he heard Fury’s voice.

“Lindsey doesn’t want to leave her roommate in a lurch,” Fury said. “Give her enough money for Lindsey’s part of the rent for the next few months. We’ll figure out the rest later.”

Crush pulled out all the money he had and counted it. “Hey, guys, how much money do you have on you? Fury wants us to give her some for rent.”

Both guys pulled what they had out of their pockets and handed it to him. He counted it and decided it was enough for maybe three months, so he’d have to come back to give her more later.

For some reason, this made him happy, knowing he’d have to see her again.

He knocked on the door once, opened it, stepped in.

She jerked up in bed. “Do you mind?” she yelled.

“No. Thank you for asking.” He smirked at the glower on her face.

He threw the bills down on the bed. “This is to help with your rent. Lindsey feels bad about leaving you so suddenly.”

Chelsea picked up the money and held it out. “Tell her not to worry. I’ve been here before. Now, take your money.”

Crush took a step back and held his hands up. “You’re going to keep the money.”

Crush grinned. “You keep it.”

“I’ll be back to give you more tomorrow.”

“The fuck you will,” she shouted.

He chuckled. God, she was fucking adorable. “You should see how red your face is right now. You know you shouldn’t lose your temper so much. It’s not good for your health.”

Her eyes widened. “Are you a fucking doctor?”

“No, I read about it somewhere. Stress can kill ya.”

She snorted. “Just take the money and get out. I’m tired, and the day is going to be grueling enough.”

He walked over and sat on the edge of her mattress, knowing it would drive her crazy. She instantly stiffened and then tried to push him off. “Get off my fucking bed.”

He leaned back on his elbows. “Not yet. Tell me what’s going to be hard.”

Chelsea tried to use her feet to push him off, but he didn’t budge.

“I’m not going anywhere until you tell me,” he said.

She growled, making her dimples deepen. Fuck, he loved those dimples.

“What in the hell is your problem?” she asked.

“It’s sweet that you care enough to ask, but I don’t have time to go into all of it. There’s so much. You know, most of it stems from a bad childhood, my dog getting run over, a girl breaking my heart.”

He grinned when she looked confused. “You asked about my problems,” he reminded her.

She rolled her eyes. “Fine, I’ll tell you. The contractor is visiting the site, and he hates me, so he always finds fault with my work.”

He almost laughed until he saw her expression. She was serious. “So, what do you do?”

“I can do a little of everything.”

“Can you drive the big machinery?” he asked.

He was impressed, and he also wanted to ask if she could reach the pedals but didn’t think she’d find that funny.

He rolled up to stand.

“Take your money,” she said.

Crush grinned. “No, it’s yours. I’ll see you around,” he said as he turned and walked out. He held back his laughter after he shut the front door.

I am absolutely addicted to this series. I cant wait for the next one. A must read. Love every book

Her Mafia Destiny by Lila Fox