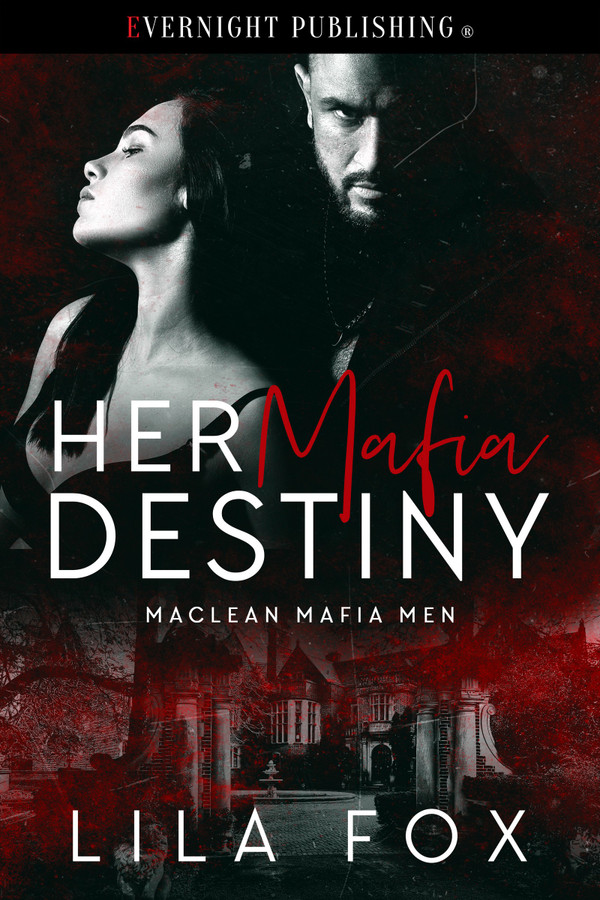 One of the most fearsome men in the city, Alastair runs his family’s enterprise with an iron fist. H doesn’t blink twice when he kills because his targets deserve death. What pisses him off the most is being unable to kill someone in his family.

Business is his priority—until Elizabeth is dragged into his life, literally. After his first look at her, he knows she’s supposed to be his.

Elizabeth is thrown into a world she might have read about in books, but she’s never experienced it herself. When she's kidnapped, a glance at Alastair tells her he’s a dangerous man. She would never admit to herself that he lights something deep inside of her, even when she hates him.

She only needs to survive long enough to escape. But he’s already convinced she's his destiny.

A loud crash woke Elizabeth from a sound sleep, and she jackknifed in bed. The bedroom door was kicked open, and two men came in. She screamed as she was pulled from the bed.

She struggled between them. “What are you doing? Who are you?”

Neither of them talked. They dragged her outside of her apartment building and pushed her into a van. One of the men got in with her, and she pushed herself into a corner of the seat with her arms around her legs, trying to hide as much of her body as she could.

Even though it was sweltering out, she was shaking so hard her teeth chattered.

“Please tell me what’s going on,” she said.

The man looked at her and then away without saying anything.

She had no idea how much time had passed before they pulled into an underground parking ramp. The side door opened, and she was yanked out. Another man she hadn’t seen grabbed her upper arm.

“If you stay quiet and don’t make a fuss, you’ll be okay.”

“What are you talking about?” she cried.

They walked through some hallways, and then a man in front of them opened a door and stood back to let them through.

She kept trying to pull away from him as he hauled her into the room and froze when she saw all the other guys in the room. She hadn’t thought her terror could rise, but it did, making her lightheaded and nauseous. They all looked dangerous, but her gaze kept going to the one sitting down because, for some reason, she just knew he was the most dangerous one in the room. When he stood, she tried to fight again, but the man just tightened his grip on her as he talked to the man.

The shock of a gunshot soon followed with horror that the man next to her had been killed and dropped to the ground at her feet. She screamed.

The man in the suit reached for her, and she jerked away. God, the last thing she wanted was for him to touch her. He started talking about her life changing and being a princess, and she had no idea what he meant. There was no one thought that she could grasp at the moment, except the man was certifiably nuts, and she was probably going to die.

The man held out his hand and made her choose between him or having two of the other men carry her. God, the thought of their hands on her made her want to vomit, so she took the man’s hand even though he’d just killed someone before her eyes. She thought it was the better choice, the lesser of two evils. She could either have one man touch her hand or two men touch her whole body.

They walked out a metal door, and a long dark car immediately pulled up. Another man opened the back door, and the boss man lifted her in before following her. When the door closed behind them, the darkness and the silence were almost peaceful if she hadn’t been able to hear her heartbeat race in her chest.

She shook her head and pushed herself into the corner.

“You’re shaking. I know most is probably shock, but it’s also cold in this car.”

She tensed when he moved slowly toward her, but all he did was pull the jacket around her and then sit back. She gripped the front of it and pulled it tightly around her.

It was a mistake. His scent permeated her senses, and the heat from his body warmed hers. Her eyes closed as she concentrated on something besides the man.

“My name is Alastair. What is yours?” he asked.

“Everything’s going to be all right, Elizabeth,” Alastair said.

“How is that even possible? You’ll never trust me to leave because you’ll be afraid I’ll go to the authorities.”

“No, you won’t be able to go anywhere right away. But eventually, I hope to be able to trust you quite a bit, and you’ll get to the point where you don’t want to leave.”

“You were taken by mistake. The man who fucked up paid for it. But now, because of the circumstances, you’re mine.”

“I’m not sure how deep this will go for us, but you’ll be my mistress in the beginning.”

Her mouth dropped open, and her eyes widened. “Y…you’re going to rape me?”

“Hell no. I won’t have to. Pretty soon, you’re going to spread your legs for me voluntarily.”

She flinched. The thought of being able to do that with a man who just murdered someone right before her eyes made her want to laugh in hysteria. There was no way she’d ever want to let him touch her.

She gritted her teeth at his arrogance but was too terrified to do or say anything. She tried to put aside the fact that blood had dried on her face and neck and had started to itch. If she thought too much about it, she might start screaming, and she didn’t think she’d ever be able to stop.

Elizabeth looked out her window to see huge iron gates slide open. They drove up a long drive and stopped in front of a set of stone steps and a huge double wooden door. Several men stood around outside, and they all held big guns.

He got out and reached his hand in. She reluctantly took it and let him pull her out to stand in front of him. It was then that she realized how much bigger he was than her. There was no way she’d be able to fight this man off if she had to.

“Now, listen to me, princess,” Alastair said. “There is no one here who will help you. They are all loyal to me and know if they go against me, I’ll kill them. So if I were you, I wouldn’t even try to ask, or you’ll be responsible for their death.”

She looked away from him and nodded. The thought horrified her, but it didn’t mean she wouldn’t try later if she became desperate enough.

She hurried to keep up with his steps as he pulled her along. An older man opened the door for them but didn’t even look at her.

There seemed to be people everywhere, but no one seemed concerned about a terrified woman in a nightgown with blood all over her. For God’s sake, what kind of world did he live in?

He led her up some curved stairs to the second floor and down a long wide hallway. Then he opened one of the doors and pulled her in. “This is our bedroom.”

“Wait? What?” she asked and tried to yank her hand away from him. No, she couldn’t handle the thought of sleeping with him. But she also knew deep inside that she’d do anything she had to survive and escape.

Overall this was a great book! The chapters were short but packed with action. There was even a twist to the story that I didn’t see coming. I absolutely enjoyed reading the book and the spice was *chefs kiss*. This was my first time reading a book by this author and I’m so glad I did. Comte wait to read more. I received a free copy of this book via Evernight and am voluntarily leaving a review.

4 STARS for Her Mafia Destiny by Lila Fox This is Book 1 of the Maclean Mafia Men My first time reading this author and Ms Fox’s first mafia genre romance ! I will be checking out more of this author’s work. The cover and blurb got my attention right away! Alastair believes Beth is his destiny after they meet in unusual circumstances. Good storyline and plot twists. I am hoping the other Maclean brothers and cousins may be getting their own books in this series! Can’t wait to read their stories ! Good read !! Read in just one sitting ! I received a free copy of this book via Evernight and am voluntarily leaving a review.

I normally don&#039;t like Mafia books, but because it was Lila Fox&#039;s book, I read it (I love and read all her books) it was Great Alastair &amp; Elizabeth, even though he was hard-- he was soft with her

For a quick escape Lila Fox stories are some of the best. I look forward to all her new releases. This isn&#039;t a Daddy Dom book. I didn&#039;t put it down till I finished it, thanks Ms. Fox for another great read!

Alastair and Elizabeth story was A quick paced, thrilling read. That was filled with drama, suspense, and passion. A great mafia romance.

This book was a pretty quick read. Alastair is the head of the mob and his guys our out collecting new ladies to dance at their club. One of his guys grabs Elizabeth because her uncle owes money, and he forces her to go with him. Alastair is enthralled with Elizabeth as soon as he sees her and decides to keep her. . . . forever. The book contains loads and loads of family drama, there&#039;s also a little intrigue and some humor. There are several steamy scenes between Alastair and Elizabeth and of course a happily ever after for them. I enjoyed reading this work so much I will definitely be looking for the next book in this series.

So this was a completely different take on a mafia story, the alpha was one big lovable man. I liked the book but not accustomed to a softer mafia story and I want to reward the author for taking me on this fun journey. I received a free copy of this book via Evernight and am voluntarily leaving a review.

For a quick escape Lila Fox stories are some of the best. I look forward to all her new releases. This isn&#039;t a Daddy Dom book. I didn&#039;t put it down till I finished it, thanks Ms. Fox for another great read!

I love Lila&#039;s books but this new series is incredible. I LOVED this story and the characters. This is a MUST read with awesome plot twists. I can&#039;t wait for the next one.

Crushing Her Defiance by Lila Fox