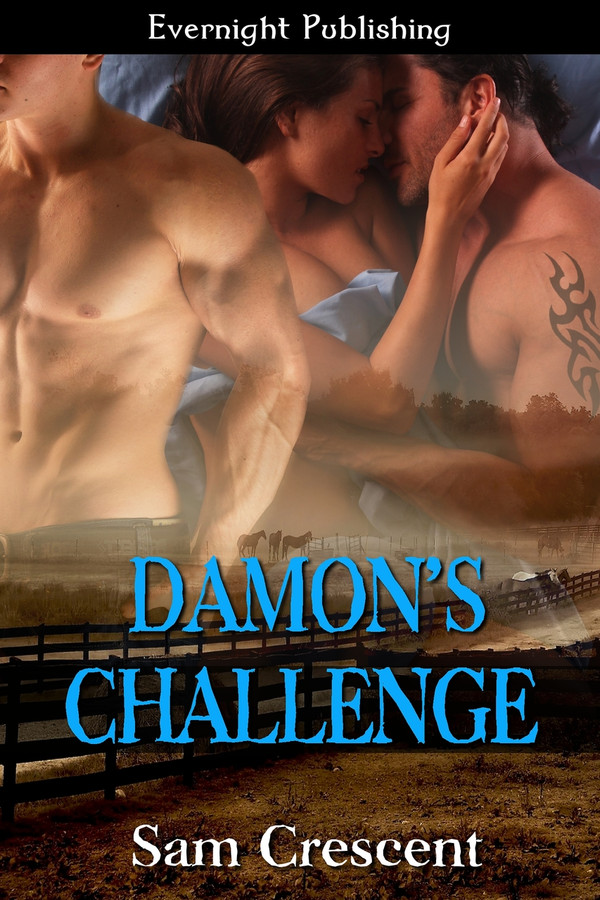 Damon’s a loner. He travels from place to place never settling down. His passions have left him lonely. There is not a couple out there who can handle his desires. Then his bike breaks down in Creek Valley, and all bets are off.

Andy and Meredith have been happily married for a few years. When Damon stumbles into their lives, neither of them anticipated the change he was about to make. Even happily married, Meredith and Andy knew they needed more. Damon sees the truth in the married couple. Meredith is a true submissive while Andy is a switch, and this complicates their relationship, each seeking from the other something that they cannot give.

Can they trust this man to complete them and give both of them everything they ever wanted? Damon knows it’s a challenge, but he’s never backed down from a fight. They could all be happy, and it’s a challenge he’s more than prepared to face.

There was no way Andy would be dominating him. His wife was submissive enough for the both of them. Damon would be the one in charge, with Andy taking and giving while Meredith would be their perfect little submissive.

I’ve got to do something to help them. They’re tearing each other apart.

Yesterday during his trip into town with Meredith he’d decided he would help them. His feelings for the couple had developed over the year, and he’d come to care for both of them.

Staring at the door, Damon waited for the sound of the door to slam shut. Andy could become a wonderful Switch with the right teaching. The couple loved each other. Their feelings were plain to see by anyone who cared to look. The only problem they were facing was their forbidden desires. Neither knew what the other wanted or wished for. Even Andy was clueless to what Meredith needed.

Shaking his head, Damon tensed as he heard the door slam shut. If Meredith was crying when he went to see her, he’d punish Andy for it. No Dom left his submissive wife in tears unless they were tears of happiness. Seconds later Andy entered the stable. He paused when he caught sight of Damon.

“Morning. I didn’t know you were awake.”

“I couldn’t sleep,” Damon said, staring at the other man.

Andy ran his fingers through his hair. “Sorry.”

“Sorry? You’re sorry?” The other man bowed his head. Damon knew he needed to be radical in order to get through to Andy. The other workers were far away from the ranch. He’d made sure they would get enough privacy for what he was about to do. “Get on your knees and crawl to me.” There was no more waiting.

“Did I give you permission to talk? Do as I say, or risk punishment, pet!” Damon kept his arms folded. Time for talking would come. First, he needed to get them both on the right step. He had to fix what was clearly broken between the two people he’d come to really care about.

Will you be sticking around to keep it fixed?

Cutting off the thought, he brought his attention back to Andy. The other man was fighting with his inner self. Damon needed to push him over the edge and make him see. “Tell me this is not what you want,” Damon said. “Tell me you hate the thought of getting on your knees and crawling to me, and I’ll stop. I’ll walk away. If, however, that hard cock I see in your jeans is because of me then I guess you better do as I told you.”

Arms still folded, Damon waited. He didn’t have to wait long. Something broke within Andy, and the man went to his knees. With each drop onto his knee a sigh escaped Andy’s mouth. When he was on all fours, Damon felt his own arousal start to build. Slowly, he watched Andy start to crawl to him. With each step forward on his hands and knees, he saw Andy’s will start to crumble. They both knew this was what he wanted, what he needed. By the time he was at his feet, Damon’s cock was hard as rock at the sight of him.

“Tell me, pet, is this what you want?” Damon asked.

Andy and Meredith love each other and have been happily married for a number of years but there is something missing from their relationship that seems to be ripping them apart. Damon, a loner has traveled around, never setting down roots sure that he will never find the couple to satisfy and embrace his kink. That is until he stumbles into Creek Valley looking for work and takes a job at Andy and Meredith’s farm. Damon understands exactly what the couple needs and it is hard on him watching the hurt they are causing each other. Meredith is a true submissive, Andy is a switch and Damon is a true Dom and together they must trust in each other and their building relationship. But will bringing Damon into their marriage complete their love and solidify their bond of three or will it rip their world apart? Author Sam Crescent takes readers on a captivating emotional journey between three people who share a deep and lasting connection that is portrayed with just the right amount of sensuality, fire, tenderness and control that readers have come to expect from the very talented pen of this author. With detail descriptions the author’s visual style of writing seems to immerse the reader in the landscape as the well-written and endearing characters come alive page after page. The plot in Damon’s Challenge isn’t rushed instead the author transitions the story smoothly with time elapsing realistically portraying a build friendship and budding attraction between Damon and the two people he longs to control and dominate. As the relationship between Andy and Meredith starts to blow up Damon makes his move in a shocking and very dominate way towards first Andy and then Meredith not only are his emotions displayed but his connection to these two are easily understood. This seems to deepen and strengthen the growing bond as their relationship builds through the characters thoughts and actions making it seem natural. The D/s scenes are intriguing and the sex is smoking hot but the author goes above and beyond making the lovers feel like a family. The ending is romantic, touching and loving and the reader can’t help sigh at the charming and heartfelt climax. Fans of this series will enjoy cameo appearances by some of the characters of the first two books in this delightful series. Once again the Ms. Crescent utterly captures the reader heart with Damon’s Challenge!

I really enjoyed Damon, Andy, and Meredith&#039;s story. This was a fast paced story and Damon was such a strong guy for such a long time. Andy and Meredith were a sweet couple but were missing something from their relationship. I liked how they worked things out between the three of them.