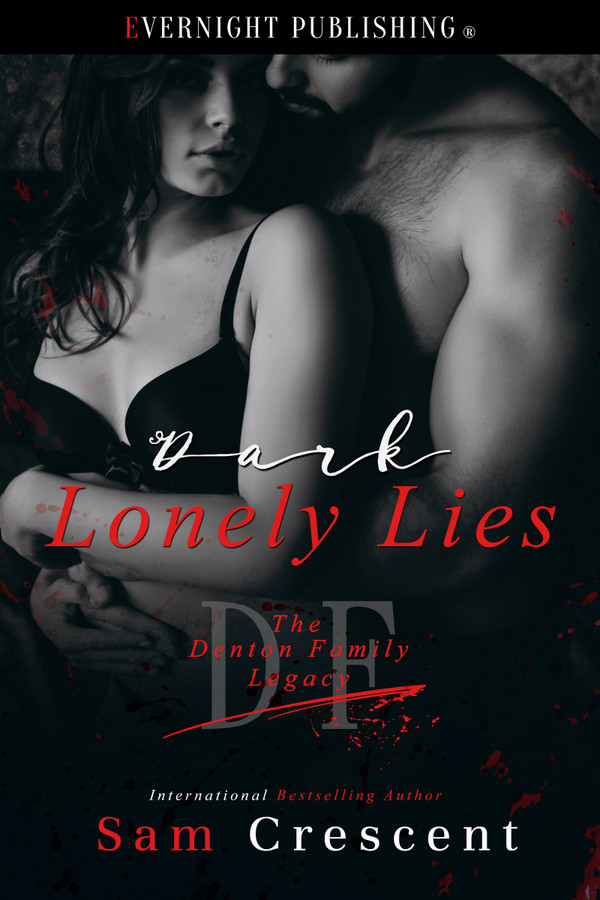 Landon Denton has a death sentence hanging over him. His woman is gone and he has nothing left to live for.

Tulip is happy living her life in England when a strange man drugs her and drags her across the world to be … some kind of pawn. More shocking, she’s told she had a twin. Yet, she’s spent her entire life in the care system and has never known the love of a parent.

The man who’s kidnapped her is convinced their family legacy is about her, and he uses her to get to Landon. Meeting Landon, she discovers he’s right.

Landon falls for her hard, and he won’t let her go without a fight. She’s at the mercy of the Denton men. Danger lurks all around her, and there’s no way she will ever fall in love. She won’t risk it.

But fall in love she does, only it’s doomed from the start. Landon isn’t supposed to live and without him, how is she supposed to go on?

Entering the bedroom, he found Tulip standing as she dried her hair. She wore a large shirt. He’d purchased them all some new clothes with money he’d stolen over the past year, from his house, from people he killed.

With Jade’s help, he’d been able to locate an underground gambling ring. There, ten men had been spending a fortune, and he’d gotten in, killed everyone, and took the money as spoils. Everything was a spoil to him.

“Are you okay?” Tulip asked. He saw she was nervous. “How was the water?”

“Warm but I can’t complain. Some hotels don’t even offer a bath. I took a shower. It makes a lot of noise and I let it run for a couple of minutes to clear any dirt. It should be good for you to use.”

He stepped up close to her, tucking a couple of strands of hair behind her ear. “Don’t go to sleep.”

“You’re ordering me about what I should be doing?”

“I’m telling you what to do.” He pressed a kiss to her head and left to go into the bathroom. He closed the door, removed his jacket, and stared at his reflection. He didn’t look like the same carefree kid of years ago. The kind of jerk who slept around with half the school.

That kid had died a long time ago, and he wasn’t coming back.

No, the guy he stared at now was a killer. He’d been trained by Rick, by the best men his father could buy.

He’d never known what real darkness was like, not until he was told Sarah was dead. When he found out the truth about his father’s involvement, he knew he was going to kill the bastard. What did he have to live for? Now, of course, the joke was on him. Men and women were still after him and he had Tulip to consider.

If he let her get hurt, he’d never forgive himself.

After removing his clothing, he tossed it to one side and turned on the shower. He waited for the water to run and stepped beneath it. It wasn’t a great shower, but it wasn’t like he had the option to be choosy. For now, they were at the mercy of whatever this house had to offer and for however long it was safe. Tomorrow, he’d have to go with Jade around the perimeter, to work out an escape route, set up points, and then run it through with both girls.

He didn’t linger too long in the shower, taking enough time to get the day’s dirt off his body. One of the towels he’d purchased was on the counter. He lifted it, wrapped it around his waist, and went back into the bedroom.

Tulip had laid out the blankets and a couple of pillows on the bed.

He and Jade had been through their lists of the barest essentials they needed when they were moving around.

The shirt she wore grazed the tops of her thighs, and he didn’t want to wait to hold her. It’d already been too long since having her in his arms.

He closed the distance between them, cupped her cheek, and ran his thumb across her bottom lip.

“This is all new for me, and I don’t know what you want from me,” she said.

He tilted her head back. Holding her hip, he smiled down into her face. “Simple. I want everything.”

He stroked across her stomach, going between her thighs to her pussy. She gasped and tensed up, but she didn’t push him away.

“All of you. You belong to me, become mine. I want your body, your heart.” He took possession of her mouth, sliding his tongue across her lip. She opened up and he plundered inside, tasting her. Breaking from the kiss, he trailed his lips down to her neck. “When it comes to you, Tulip, I want to give you the world.”

“You’ll never be second best.” He let go of her cheek, sliding his hands down to her ass. Gripping one cheek, he pulled her in against him. “You feel that? You feel what you do to me? How hard I am for you?”

“You could be hard for anyone,” she said.

“This is crazy. You think it’s because your body is telling you this.”

“I’ve never done this before,” she said. “I’ve never been with a guy.”

“You lived on the streets.”

“I know, but I’ve never … not with a boyfriend. Not with anyone. I avoided it. I found every chance I could to get out of harm’s way.”

He saw tears shimmering in her eyes. “Why are you crying?”

“You’re laughing at me.”

“I’m not laughing, Tulip. I wish you were my first, but it’s not possible. I’ve had so many women, but I know exactly what I want to do tonight.”

Tulip was living her life; it was not the best life, but it was her life. Then a demented man sees her, calls her “Sarah”, and kidnaps her. When she realizes the only way to escape is to play along with Landon, the playtime was over. Landon is out for revenge, or at least he was. Now he has to keep the one he was supposed to save while dealing with the loss of “the one”. The love of his life is dead at his father’s hand which led him to where he is. He has nothing to live for because the one he loved is dead, or is she? Tulip will do anything to get her life back, or so she thinks. Landon will do anything to keep those he cares for and love safe from harm. Once he wanted to die because he lost her, and now he knows he must die in order to keep her. Will Landon’s plan work, or will everyone he loves die with him? Oh my, there are very few words for the roller coaster ride of Tulip and Landon’s life. Most of the time the roller coaster ride seems too short, but in this case Tulip and Landon need to find the station, and quick. I was hooked on every page and there was no way I could stop before I could figure out how the pawns in a game of life could find their way off the chess board, and if their departure was through death or life. I highly recommend the writing of Ms. Crescent and the Denton family because if there was a family you love to hate it is the Dentons. I am reading the series because I have to see if the rest of this shipwrecked family have any redeeming values like Landon and Tulip.

This book had me totally engaged from the first page. Landon Denton is out of control and on the run. His family wants him back but can&#039;t catch him. Having lost his love, Landon is on the run with a friend, Jade. Meanwhile, one of his family sees a girl who looks exactly like the woman that Landon is grieving. How can that be? A plan is made and that&#039;s when Tulip is drawn into the mix. I loved her. She&#039;s strong, she&#039;s feisty and she doesn&#039;t take bull from anyone!!! (sorry, couldn&#039;t put the exact word I wanted to say LOL ) What follows is an adventure that takes Landon, Jade and Tulip all over the place trying to stay ahead of bounty hunters who are after him. Oh, did I mention Landon has a price on his head? Silly me! Anyway, this story kept me turning the pages and I couldn&#039;t wait to see what was going to happen next. And that twist in the end??? Wow!! Ms. Crescent has gotten really good about putting little twists and turns in her stories and I&#039;m loving it. I really need two more stories now, Gabriel and Jade..........and Mason and Tamsin!!! Please!!!

I love this series. It’s definitely dark at times but I really enjoyed it and I can not wait for Tasmins story!!

I could not stop reading. Sam Crescent has done an amazing job. Landon and Tulip are two people that have been through hell in their lives and they&#039;re the only ones to accept and complete each other. I love how Tulip doesn&#039;t judge Landon for killing people because she believes some people should die from what she&#039;s seen when she was in foster care. Not only does Landon fall in love with her and has something to fight for, but he gets angry for Tulip because her parents abandoned her and gave Sarah a good life while she&#039;s struggled for survival. Overall, everyone should read this book. All that&#039;s left is Gabriel and Tasmin. Can&#039;t wait to read their stories!

Oh my goodness. I hate Rick so much but I kept going and Land on and Tulip, wow I read this book in a couple of hours did not want to stop...I needed to know what was going to happen next...unfortunately I wished it would not end but I am so eager for Tamsin and hopefully Gabriel stories...5 stars all the way

Sam outdid herself this time. Landon&#039;s and Tulip story was outstanding it was worth the wait. There was a little surprised with Jade but I expected that but wow I could not put down this book I had to finish it I waited this long and I could not stop reading it you have to read it especially if you are Denton Family fan. LOVE It!!! Next is Tamsin can&#039;t wait...hurry!!