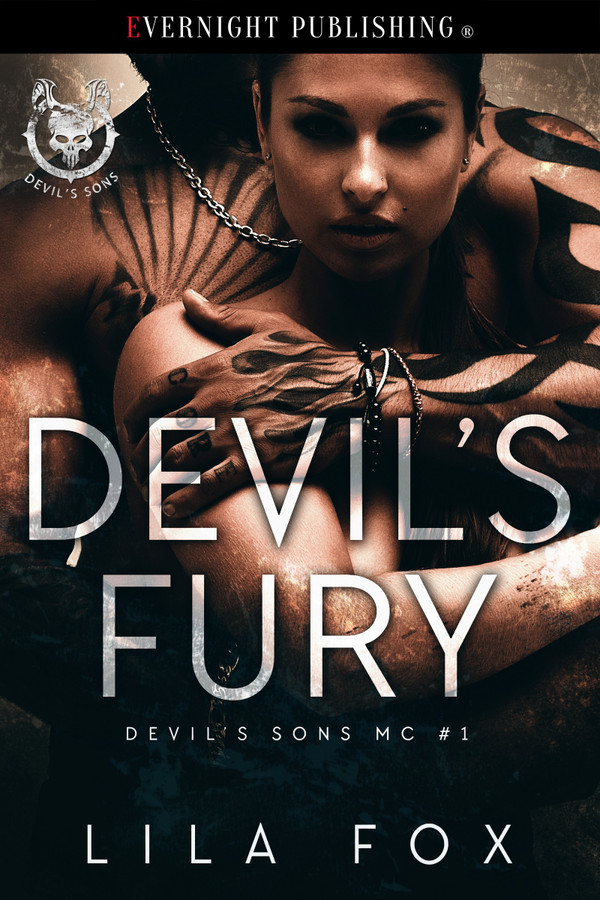 When she isn’t caring for her dying parent, Amelia works hard at several jobs. She doubts she’ll ever save enough money to escape the city that holds too many memories, but she doesn’t give up.

When the Devil’s Sons MC stops by the strip club she dances at, their president, Fury, is hooked with his first look of Amelia on the stage. She doesn’t belong there, and he’s determined to make her his woman and give her the life he knows she deserves.

Fury encourages Amelia to come to his clubhouse and give the MC lifestyle a chance, but it’s not a done deal just yet. Club drama ensues, complicating her trust in him. When a spiteful member of a rival MC takes her from him, Fury will do whatever is necessary to get her back and keep her safe.

Fury, the prez of Devil’s Sons MC, pulled up outside the strip joint, followed by several of his men. They were out to blow off some steam because Fury knew they’d all be fighting with each other to get the aggression out if he didn’t turn their attention to something else. This was all because they’d just finished a long run and were glad to be home.

He also needed to look into finding new whores for them. They only had three left, and that wasn’t enough for his men. He wasn’t worried. Women flocked to them, and they got to pick and choose. Druggies and mommies weren’t allowed. He didn’t want to have to deal with either of them. Straight-up sluts were what he needed for his boys, and he was hoping he’d find some tonight.

After he got off his bike, he turned and rolled his eyes when he heard the guys arguing and pushing each other around. An ear-splitting whistle was all that was needed to get their attention.

Burn pushed Ax, making him laugh, which pissed Burn off some more.

“Fuck ’em,” he told Traeger, vice-prez of the club and Fury’s closest friend.

Traeger chuckled and followed him through the door.

Fury handed the doorman a couple hundred to get them all in. It was way above the amount they asked, but he was on good terms with Price, the manager, and he wanted to keep it that way.

He was used to the way people would take one look at them and move out of their way. It was good that they feared the club. It kept the citizens of Los Alamos, New Mexico, on their best behavior.

Very rarely was there a rape. It was one of his super peeves when men took advantage of women, and he went beyond rage if it was a child. Murders were close to nonexistent if you didn’t count the ones they did. He smirked. Fortunately, the good people of Los Alamos didn’t know that, and the people they killed were worse than the club.

He scanned the large room and saw that Traeger had already procured a few tables up in front. The men sitting at the tables gave them up freely and rushed to the other side of the stage, making him grin. He thought his vice-prez enjoyed scaring the hell out of people a little too much.

“Fury, I ordered a half-dozen pitchers for us.”

Fury snorted. Fuck, he had said it was his treat tonight.

“Hey, I was hoping you guys would come in tonight,” Price said as he came up to the tables and slapped Fury on the shoulder. “It’s been a long time.”

Fury turned his torso and shook Price’s hand. “Yeah. We’ve been busy the last several months with construction on the compound. Then we had a run to make, but now we have some free time.”

“I ran into Bear on Main Street, and he said it was a possibility you’d come. How’s everything?”

“Good. The add-on to the clubhouse is done.”

Price’s eyes widened. “Jesus, I thought that would take you guys a year to build on. I saw it when I drove past the other day. It’s bigger than the original club.”

“We decided to spend money and our time with it. We all want comfortable and bigger rooms, and we soundproofed them, so we didn’t have to listen to each other fuck. Since they had incentives wanting their own large bedrooms and bathrooms, they all kicked ass building it.”

Price chuckled. “That probably did suck for the guys that had to share.”

“It wasn’t pleasant for anyone,” Fury said with a growl, remembering some of the fights.

“Who gets the old rooms?”

“The prospects. Someone started calling them toddlers, and it stuck. Maybe because it’s pissing the new guys off so much.”

Price threw back his head and laughed. “Fuck, I can imagine.”

Fury glanced at the stage when the next set started. The lights dimmed in the room, but they kept the stage bright. The music was a sultry, sexy tune. When he caught sight of the stripper, it was like his chest was hit with a tire iron. He was so stunned, he couldn’t move or talk for a moment.

“That’s Amelia. She goes by Cheri here. She hasn’t been here a long time, and it sounds like she’ll be moving on soon.”

“Tell me about her,” Fury demanded.

“I’ll tell you the short version of her story. She got this job here so she could have the time and the money to take care of her father, who had cancer. He just died a few days ago. When I talked to her earlier, she said she would save up and go somewhere else. I wish she wouldn’t. She’s one of the guys’ favorites.”

He was unable to tear his eyes off her the whole time she danced. He could tell she wasn’t an expert and hadn’t done it long, and it made him smile. The way she moved was too jerky and part of a practiced routine, but it didn’t matter to the men in the room. They went wild for her.

He guessed that her gaze stayed above the men’s heads was because she didn’t like what she did and hated the males’ attention.

The crowd booed when she was done and went off the stage while another extremely thin woman slinked onto the stage. He could tell this one loved her job and craved the men’s attention. She made sure of it with her provocative movements.

“I want to meet Amelia. Is she single?”

“She’s single, but she’s not like the others, man. She’s incredibly sweet and doesn’t have a mean bone in her body. I don’t think she’d ever agree to be a club slut.”

Fury’s eyes narrowed. “I don’t like being questioned, Price, but I’ll tell you because I know you care about her. She wouldn’t be one of the whores. No other man would touch her.”

“Seriously?” Price asked, and even Traeger turned in amazement.

“Will she come back out?”

“Yes. She has another two sets.”

Fury stood. “Let me talk to her now.”

Price led him to the backroom. Several women were naked, and it didn’t bother them at all that he was back there. In fact, a few of them tried to get his attention. One little slut was so thin he could see her pelvic bone. She grabbed his arm, and he froze and looked down at her.

“Sadie, you don’t want to push him,” Price warned.

“I just wondered if he wanted a date.” She tried to press her naked body to his.

He jerked her away from him and held her wrist tight. He enjoyed the gasp and the fear that filled her eyes.

“You don’t ever touch me without permission. Do you understand?”

Fury knew it wasn’t so much the words as the cold way he said it. He released her and followed Price.

Tucked back in a corner was a table with a big mirror and two girls sitting in front of it laughing.

“Hey, Amelia. I want you to meet someone.”

Devil had his club and the men within it as his family, and he thought he was living; until he met a stripper. She is like no one he has ever met and terrible as a stripper. He decides to offer her a new job and a very important place in his life. Amelia is clueless about club life, but Devil has cared for her more than anyone else, even if she has no idea what he wants with her. When she moves into the club, she is surrounded by a very different life she must learn to sink or swim. Her best friend came along for the ride and all she can hope is they do not get chewed up and spit out. Devil thinks he has it made with his new old lady and his club, until someone takes one and threatens the other. When Devil’s fury is unleashed, the object of is wrath better run because when he gets done no one will find them again. Can Fury save his lady, or will he lose it all and never be the same again? I love Amelia – the woman is amazing. She steps into a strange world most would think would chew her up, but she proves you should never take kindness as a weakness. Devil is a typical biker who thinks he is in control, until his woman moves in and shows him that behind every good man is a better woman. I love this series and I will be reading all the books because Ms. Fox had me hooked from the very beginning.

I loved the characters and the storyline. I hope the author comes out with more.

Quick read...feisty heroine and alpha biker. This was a fast but enjoyable story. Hope it&#039;ll be part of a series.