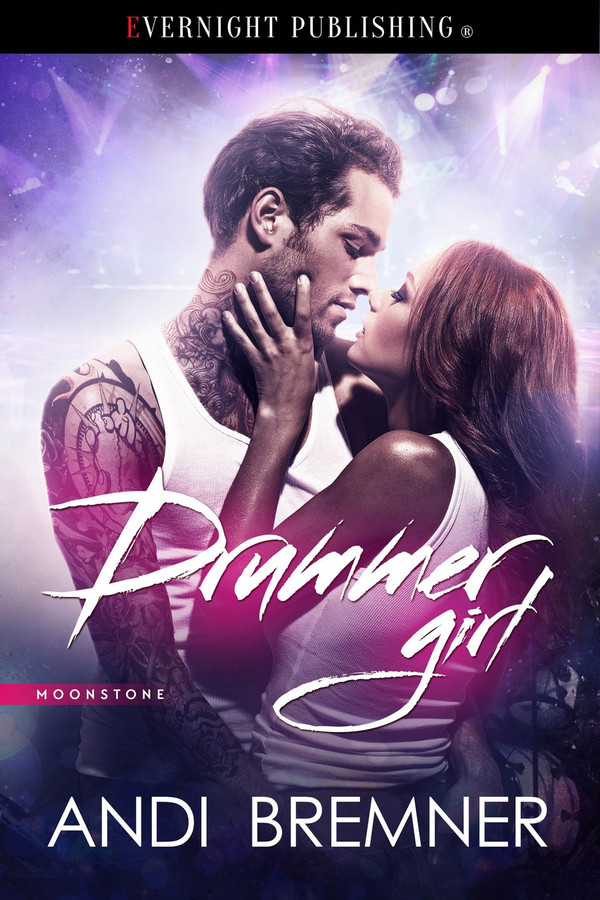 Shawna Gill, drummer for the all girl band Moonstone, is hiding a shameful secret she can't let anyone find out about...

When an opportunity comes up to play drums on The Lairs new album, Shawna jumps at the chance. Her passion in life is playing percussion. But performing with The Lair means spending time with Adam Wilson, their sexy, arrogant, lead singer who seems determined to antagonize her at every turn.

But as their hate slowly turns into a passion neither of them expected, Shawna is torn between choosing what her heart wants and losing what she has sacrificed everything for. And worse too, her secret could come out and she could lose the one person more important to her than anything.

What the hell? I planted my hand, palm flat on the middle of the steering wheel, sounding the horn. The driver in front, in a maroon sedan with out of state number plates merely gave me the finger in the rearview mirror.

Nice. Real nice. First they pull out in front of me and then they insult me when I correct their driving. I narrowed my eyes. Arsehole.

And to top it all off they were now driving incredibly, purposely slow. One glance at my speedometer told me I was going twenty miles an hour in a sixty zone. At this rate I would never get to church and I was already late. I could just imagine my mother right now, scanning the congregation, her neck stretched out like a giraffe and her eyes anxiously assessing everyone walking in. I was already late and this guy was determined to make me later.

Planting my hand on the horn again I let it blare for a little longer. How old was this guy? Eighty?

Suddenly he planted his foot on the break. Too late I saw the red lights flash up on the car and quickly slammed my foot on the brakes, sending my car into a tiny skid. Oh shit. I knew I was going to hit him and squeezed my eyes shut, only opening them after I heard the crunch of metal on metal and the cars were at a standstill.

Now I was definitely going to be late. And I was going to have to explain how I crashed my mom’s car.

Ugh. It served me right I guess for going to one of Tony Hurst’s parties and staying way too late. It had been after three a.m. when I’d finally climbed into bed so I was now extremely tired, plus, I had to admit I was a little hungover. It was probably the hangover and the lethargy that had contributed to this damn car crash, although if I hadn’t had to deal with imbeciles so early on a Sunday morning…

Steam rose from the bonnet of my car. The back end of his car was crumpled, although when I climbed out the majority of the damage seemed to be to my mom’s. His was some kind of old sedan, the type made out of solid metal, whereas my mom’s was a Japanese import that had crumpled like it was made of tissue paper.

“What the hell?” I yelled now as I heard their car door open, “this is totally your fault!”

“How is it my fault?” replied a smooth, masculine voice with a touch of amusement. “You’re the one who hit me.”

I turned around to face him, temper flaring. One glance though and I found myself faltering. Whoa. I hadn’t been expecting that.

A very good-looking guy stood watching me, arms folded across a broad chest and mouth twitching. A very, very good-looking guy who made my stomach do all sorts of little butterfly leaps and jumps. Short, partly shaved dark hair graced his head and his face was hard and angular with one of those jawlines that makes your knees go weak. Dark stubble traced said jawline and green eyes gleamed out from a tanned face. He wasn’t tall, although he was taller than me, with broad shoulders and well-defined arms. His body tapered down to a narrow waist off which hung denim jeans. Tattoo sleeves wrapped around both arms and I could see the edges of more tattoos peeping out from the top of his t-shirt too. The guy was seriously inked.

My stomach dipped for a second before I remembered what had just happened. And the fact that I’d just perused him like he was a delicious candy bar. And he was watching me with a stupid cocky grin spread across his face like he knew he was ridiculously good-looking. Which he probably did. I glanced up and met dancing green eyes and decided, yeah, he knew.

“I wouldn’t have fucking hit you if you’d been travelling at a decent speed,” I spat, “and if you hadn’t pulled out in front of me and slammed on your brakes.”

He shrugged. “Still, looks like you’re the one who hit me. Maybe you shouldn’t be in such a rush. It is Sunday morning by the way.”

I tugged on my blouse and lifted my head. “Exactly. Sunday morning and some people do have places to be.”

I frowned, hating the way he said that. As if it was ridiculous, as if I would be ridiculous if I went to church, which was exactly where I was headed.

His eyes widened and then he began to laugh harder. “You are going to church!”

Ignoring him I made my way back to my car and pulled out my purse, searching for my insurance details and a pen and paper. While I wrote out my details he continued to talk.

“Actually now that I am checking you out,” he drawled, making obvious reference to my early perusal of him, “you do look like you are going to church. All sweet and conservative. You don’t sound like a church girl though. Does your mother know you swear like a trooper?”

“Don’t worry about my mother,” I replied tersely, “and don’t be checking me out.” I handed over my details and then stared at him expectantly.

“What?” He grinned, baring smooth white teeth. “You like what you see, hey babe?”

I rolled my eyes. Not only was he an arsehole but he was an arrogant arsehole. The worst kind. “Your details? For insurance.”

He didn’t even bother looking embarrassed by his misconception but simply shrugged and went back to his car. I waited impatiently, tapping my foot and glancing repeatedly at my watch.

I was very late now. I cringed inwardly. Perhaps I could slip in through a side door and say that I had been there the whole time. Bryce would be there and so would Hannah, they’d vouch for me. I just didn’t want to embarrass my parents. It was bad enough I’d humiliated them once already in this lifetime and I was continually trying to redeem myself. This was not going to help my case.

“Hey now that we’ve exchanged numbers maybe we can go out sometime,” arsehole guy was saying now, “I’ve never dated a girl like you.”

I snatched the number off him, glaring at his smug, cocky expression. “Well I’ve dated guys like you and let’s just say I won’t be making the same mistake twice.”

He grinned, like my answer somehow pleased and amused him. With a huff I turned back to my car. It was still drivable but would need to be fixed as soon as possible. This meant that my mom’s car would be in the shop for some time and I’d have no way to get around except for public transport and relying on my friends, which I hated doing.

“Hey,” arsehole guy called back now, “I know you.”

He narrowed his eyes, “Yeah. I do. Just need to think about it…” he tapped his mouth thoughtfully, his eyes fixed on me.

“Well,” I drawled sarcastically, “don’t think too hard. You might pop a blood vessel.”

Shawna discovers that mistakes don&#039;t define you in DRUMMER GIRL. Shawna has always been drawn to music. She loves to play the drums and her all-girl band Moonstone is going places. Unfortunately, her family isn&#039;t. They have her life all planned out and it doesn&#039;t include rock and roll. She&#039;s an adult, at college getting her degree but to her mother, she&#039;ll always be the fifteen-year-old who made an embarrassing mistake. Then on her way to church she runs into Adam. Adam is the lead singer for The Lair, a famous rock band. When Adam manages to drive off their drummer Ryan, Shawna gets a chance to play with them. As Adam and Shawna spark off against each other, Adam begins to break down Shawna&#039;s shields and falls for her. Yet, just when it looks like Shawna can have the life and man she&#039;s always dreamed of, her parents lay down the law. Can Adam save his girl or will Shawna&#039;s teenage mistake trap her forever? Andi Bremner draws a thin line between teenage rebellion and finding oneself. Shawna is not a rebel, in spite of her parents&#039; thoughts to the contrary; she is instead a young woman finding her feet in this crazy world. DRUMMER GIRL is a coming of age story. It explores how we let the past shape the future and how to escape that cycle when it becomes toxic. The language is simple and the characters are raw, but emotions are raw. If you want a book about overcoming adversity and achieving your dreams, then check out DRUMMER GIRL. - See more at: http://erotic.theromancereviews.com/viewbooksreview.php?bookid=22847#sthash.z3auXpsf.dpuf

Really enjoyed Trinity from Andi Bremner and was looking forward to reading more about the Moonstone girls. Drummer Girl did not disappoint and has lots of great dialogue between Shawna and Adam which created lots of tension. Another great read from a new author. Looking forward to more Moonstone stories!