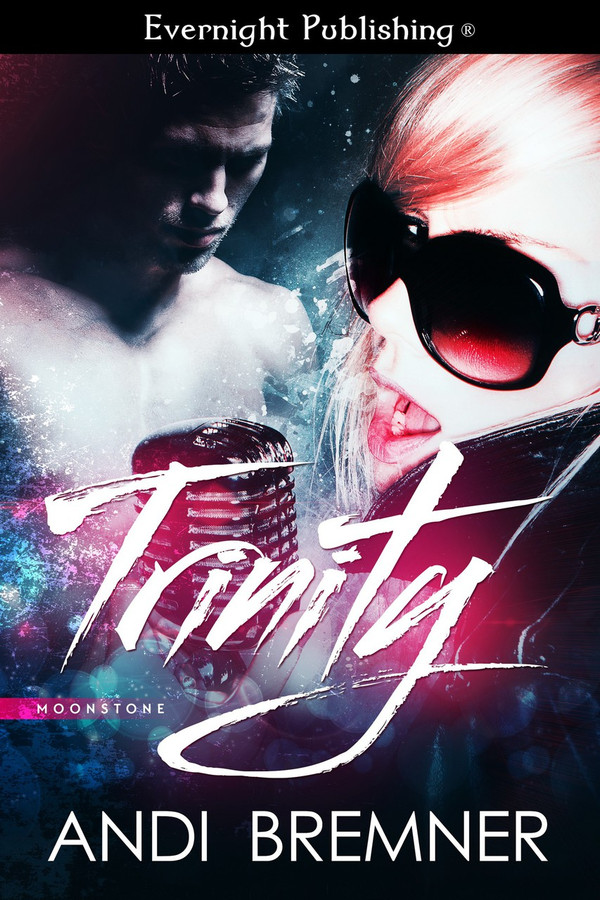 Trinity Laker is the tough-talking, sexy, and talented lead singer for all girl rock band Moonstone. Broke, emotionally and physically damaged from her relationship with her abusive mother,and sometimes homeless, she doesn’t have the time or energy for romance of any kind. For Trinity, her world revolves around the band.

From the moment she steps on stage, rich boy Luke Morrison is intrigued by her and knows that he has to have her, no matter what secrets he has to keep.

I must have willed it because before I knew what had happened he had lowered his head and was kissing me. His lips were warm and soft, tentatively touching against mine as if asking for permission. I trembled under the kiss but still managed to answer him. Yes. I wanted him to kiss him. Even if every rational thought told me no.

“Let’s get out of here,” he mumbled against my lips as he broke the kiss.

I was still heady from the feel of his tongue and mouth and could do nothing but nod and follow along as he led me out of the club.

As soon as we reached his car, he pushed me up against the passenger door and kissed me again. This time the kiss was harder, darker, and more passionate. His mouth moved against mine urgently, his tongue intruded into my mouth, tangling with mine as he pushed me back against the car. The door dug into my hip but I didn’t care, all I cared about was the way Luke’s tongue tangled with mine, the way his hands gripped my face, turning it up to him, his thumb running across my cheek.

I was shaking from head to toe and struggling to breathe. I’d never been kissed like this, so desperately, so demandingly in my whole life. Truth be told, I’d never really been kissed.

His hands moved against my waist, over my hips down to cup my buttocks and pull me more fully up against him. My hands went to his arms, roaming over the curved muscles beneath his shirt before tracing their way up to curl in the short strands of dark hair at his nape. I heard a sound, a desperate groan, and realized it had come from me.

“God you’re beautiful,” he murmured against my mouth before tracing kisses down my throat. His hands had bunched my skirt up and now they slipped underneath and I felt the warm calloused skin of his fingers on my thighs. I thought I might actually melt from his touch.

A thousand sensations fluttered in my lower stomach. I didn’t ever want this to end, a thought which terrified me.

The beep of a car alarm being disengaged broke our moment and Luke paused, his lips on my throat, his breathe coming in short, shallow pants. Slowly he raised his eyes to meet mine. They were dark, hooded, the pupils heavily dilated.

I managed a little smile at him although I wanted nothing more than for him to kiss me again.

“Sorry,” he said when he finally spoke, his voice a little croaked. “I got a bit carried away.”

He grinned, and I don’t think I’d ever seen anything half so sexy in my entire life. Releasing me, Luke reached around to open the door, waiting as I slid in. He groaned a little when I adjusted my skirt and turned away, before walking around to the driver’s side.

When we pulled up behind The Bean where my car was parked, Luke turned to me.

My heart skipped a beat at the desperate sound in his voice.

“You are seeing me right now,” I whispered.

The only reason I finished this book was because I can&#039;t leave unfinished books. And of course Luke. He was the saving grace. Luke was caring, protective and loyal. Be was as perfect as a guy could be. Of course he made some mistakes. But that only made him more real, even though he did irritated me a little. Lol But Trinity was another thing. I know she had a harsh life, but... She was weak. She would do/say something I would be proud off, but soon after she would ruin it. She could be as sweet as she wanted to be, but I wished she was a fighter and wouldn&#039;t let people to walk all over her. I love my girls with a spark and sass. Trin should have cut her bitch of a mother out of her life long ago. It&#039;s better to be alone than have that kind of poison in your life. And Trinity should have fought for Luke instead of keeping pushing him away. He was a gift sent to her and she was throwing it away constantly. It pissed me off. And the ending... I don&#039;t wanna to reveal anything, so don&#039;t continue to read as it may be a little giving away. But the ending, or more correctly Trin made no sense to me. She broke up with Luke because she thought they are from different world and it couldn&#039;t work, of course there was a little more to that but it was mainly reason, even thought she knew he really loved her. And at then end they started a knew, when nothing really changed. It missed the reason why Trin changed her mind about them as a couple. Did she realized he was worth fighting for? That they could make it work? What? I really would have liked to know.

Love a rock n roll story? Trinity has it all. I started reading and couldn&#039;t put it down. Looking forward to more in the Moonstone series!