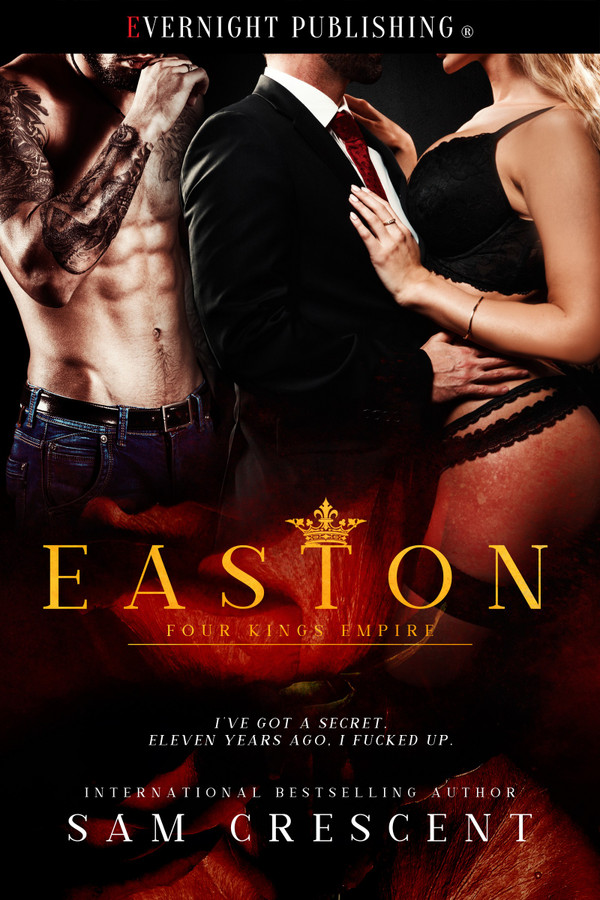 Easton Long can’t go on. He’s tired of the lies, and the only break he gets is at the bottom of a bottle. However, The Four Kings don’t accept failure. He can’t fuck up. Thrown into rehab, Easton can’t hide from the truth any longer. His only solace is with his long-dead girlfriend.

The past is catching up with him.

Scarlett Knight never wanted to see Easton again. He broke her heart, shattered her soul, and left her with nothing. But with him back in her life, she can’t ignore him.

Easton knows he fucked up but he can’t lose her again. He’s willing to do whatever it takes to show her he’s not the asshole who broke her heart.

The only problem? She’s married to an amazing guy, one who makes Easton feel part of their family. There’s no way he can break them up. Is there a chance for him to find his place in their world without breaking it apart? Nothing has ever meant more to Easton than making his new life work, but how can he walk away from the past, when it still hangs around?

“I don’t know. I’m … trying to imagine you with someone else, and I can’t help but get jealous.”

“Stop imagining me with another woman.”

“See yourself with another man,” he said, going back to her pussy. “How about Easton?”

“You want me to imagine you and Easton, together?”

“You saw him last night. It’s not hard to picture him.”

“But he’s the father of my child, and you only met him last night.”

“And this morning. I’m still waiting for the call.”

“Is it weird because you still have feelings for him. Or you’re jealous? Or, you don’t like him anymore or find him attractive?” he asked.

“I honestly don’t know,” she said.

“A little bit. He broke my heart, Liam, but at the same time, seeing him again, it’s like the past doesn’t matter. I think it should, but I can’t hate him. He’s not the guy who hurt me.”

She sounded so sad. His grip on the razor tightened. Hearing that slight catch in her voice was too much. He couldn’t allow anyone to hurt her.

“He seems like a nice guy. You know him better than I do. I only know the facts that I’ve got on him.”

She laughed. “I don’t want him to be hurt or put in any kind of danger. What happened between us was in the past, and I’m not going to keep bringing it up. Talking about him being shared is off limits. I don’t think I can handle that.”

“Scarlett, you’re a strong woman. You can handle anything and everything.”

He finished shaving her pussy. Running his fingers over her, it felt so smooth. “Your turn.” He handed her the razor. She left the stool, and he took a seat, letting her do with his cock whatever she wanted to. “I’m now at your mercy.”

“I can’t believe you’re trusting me with this.” She stood, and he watched her pressing her thighs together.

“Does it feel weird?” he asked.

“I don’t think that’s possible. This is strange.” She shook her head and sank down to the floor.

“Now, this is a pretty position for you.” He stroked her head.

“I’m not, but I can appreciate certain positions for fun. Like this one, I like it a lot.”

She rolled her eyes.

“If I was a Dom, that would have earned you a spanking.”

She giggled. “Would you like to spank my ass, Sir?”

“I’d love to do more than spank your ass.” He pulled her onto his lap, sinking his fingers in her hair, and grabbing her ass. “One day, I’m going to fuck it.”

“You really do know how to talk dirty.”

“You’ve not seen anything yet of what I’m capable of.” He kissed her hard, nipping at her lips.

“Will I be able to handle all of you?”

Liam stroked her ass cheek. “I think you’ll be surprised at just how well you can handle me.”

Easton knocked on the door and Liam was there, opening the door.

“You know for a successful businessman, where’s your butler?”

“I like my privacy, and when you’ve got money, people like to sell you out. I don’t trust anyone. Besides, it’s rare I have to open the door. It makes me feel human.” He stepped away from the door, and Easton walked over the threshold.

“Where’s Scarlett and Junior?” he asked.

“In the dining room, working on his homework. Do you want to go on the tour now, or later?”

“I’ll take the tour now.” It would give him time to settle his nerves. This was really happening.

Liam took the bag from him.

“I can handle that.”

“Don’t worry about it. I can deal with it. Let’s go.” Liam went straight for the stairs.

“You don’t have anywhere else to show me downstairs?” Easton asked.

“Yeah, but we can put your bag away and do the tour upstairs, then down, and you don’t have to worry about where you’re sleeping.”

They walked up two flights of stairs to get to the second floor.

“At the far end of the hall is Junior’s room. I’ll let you have a look. He’s always liked his own space, and he likes to invent things.” Liam opened the door.

Junior’s room, his son’s space was separated into two parts. One half was a bed and a normal, neat-looking bedroom. The other looked like a laboratory or science geek’s headquarters.

“He is, and it’s how he watched some of the rather unflattering videos which turned him vegan. It scared Scarlett, but I’ve put more security in, and well, I warned Junior if he tried to get past my firewalls and passwords. He’s a great kid. Scarlett is a great mom.”

“You didn’t know her at all when she gave birth?”

“What about her family?”

“Look, I don’t know how much she wants you to know, but she had it rough. Her parents threw her out for being pregnant. A lot of vile words were thrown her way; slut, trash, bastard. She left with nothing, and she survived. She waited tables while she was pregnant. I paid her medical bills. They were ruining her when I met her, but she had also been beat up pretty bad.”

“There is a lot you don’t know about her. She’s a fighter, but she needed help. It’s hard for her to accept it.”

“Do you love her?” Easton asked.

“You’re older than her.” He didn’t know why he was even bothering to bring it up. A little over ten years wasn’t old at all.

Liam laughed, folding his arms. “Are you jealous of me, Easton? You think you can come in my house and take my woman?”

Easton didn’t cower or back down. “I want to make sure Scar is happy.”

“She is. Remember you’re here because of me, not her. If I think for a second you’re crossing the line, I will end you. I take looking after my family seriously. I’m inviting you to be part of it, not destroy it.”

Easton held his hands up in surrender. The truth was, he wanted to punch Liam in his smug bastard face. This man had everything Easton ever wanted, without all the fucked-up shit in his life. For the past couple of days, he’d been trying to figure out what Liam’s deal was. What did he want from him?

All of his life, people had an agenda, something from him. What was Liam’s?

“I just want to make this work,” Easton said. He would pick his fight with Liam when the time was right. He wasn’t strong enough.

Wow. I loved this book! Easton was so lost and guilt-ridden and hurt. Liam was INCREDIBLE. Pretty much the perfect man in the way he loved Scarlett and Easton, protecting them. He is so mysterious and the tiny tidbits we got of his backstory were tantalizing. I would love a prequel for him. This was just a wonderful love story. It had a rawness that I loved——-Easton’s alcoholism, his tortured guilt, Taylor’s grief and resentment of Easton, Liam’s and Scarlett’s total honestly with each other, the Four Kings friendship, and that little twist in the story re: Carla. Ugh, I just loved it all!

One of my favorite books from Ms. Crescent. Loved the complexity and love of these characters. I cannot wait for the next story in the series.

WOW! What a truly amazing book. Liam, Scarlett and Easton were so hot and loving together. The storyline and characters were great. Sam Crescent once again wrote a magnificent book I could not put down!

Okay....WOW!! The second book in this series just rocked. Easton struggles with what happened in his life 11 years ago and his buddies are determined to help him. I don&#039;t really know how to describe what goes on in the book, you just need to read it. The attention to detail that the author writes takes you on a journey into the past and takes you along for the ride in the present. I loved Liam and Scar so much and they were perfect for Easton but it&#039;s a struggle to make Easton understand that. And for the moment, I&quot;m not like Taylor too much. When you read the book, you will understand what she has done. Not that she is a horrible person but I&#039;m hoping that before the series is wrapped up, she can redeem herself. She really caused a lot of problems and towards the end of this book was beginning to realize and understand the damage she had done to Easton and to herself if she&#039;s honest! All I can say is this book blew me away!!! Loved every minute of it and I can&#039;t wait for the next one!!

OMG! I love Sam Crescent’s books, but this was awesome! I really didn’t see this coming, and I loved it. Easton was one of those “everyone leave me alone I am not putting this down until I finish reading it and see what happens” kinds books.