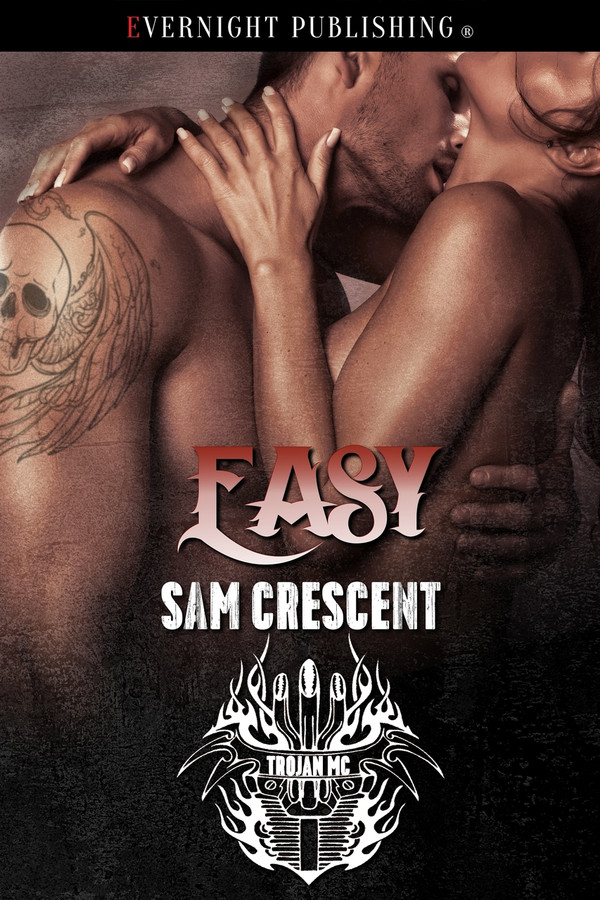 From the moment that Brass saw Eliza, he knew he was going to have her. But having her isn’t the problem. Keeping her is. Eliza always looks so skittish, as if she is waiting for something bad to happen. When she finally tells him the truth about her father’s control over her life, Brass knows he will do everything in his power to protect her—even take on her father.

Eliza is used to men being bought off. No one wants to stay with the fat girl, and they would certainly rather have a big wad of fat money than have her. All she has ever wanted is a guy to love her, desire her, want her. Could that man be Brass?

The Trojans are going through a trying time, and with it, they don’t have the need for another old lady who could leave them. Brass not only has to prove to the club that Eliza is the one, he must prove it to the woman he loves. When her father finally comes to town intent on destroying everything connected to Eliza, can the Trojans band together to fight an unusual enemy, one with both power and money?

“This is my apartment, babe. I went to get you coffee. Fat, ugly ass? Do I need to spank you for that shit?”

She shook her head. “No, not at all. I told you about Darcy, my supposed husband to be?”

“Yeah, you may have mentioned him when I was balls deep inside your sweet pussy.” He handed her a steaming cup of takeout coffee. The bag he had in his other hand smelled delicious. Brass, last name and even first name unknown, but she didn’t care. She was just basking in the fun with him. Never had she been able to be herself, and yet, Brass demanded it.

“Well it’s what he told me. He’s gay. Has a guy who he actually sleeps with. It kind of sucks really, to be honest.”

“Wait, wait, wait. You’re telling me that the guy your father wants you to marry likes dudes? He takes dick?”

“I guess he is. He also gives it.” She had walked into his office when he had been giving it to his boyfriend. It had been a real eye opener. “Do you have a problem with that?”

“I don’t give a shit about a guy’s preference. Personally, I love a good pair of tits, a nice tight pussy, and with you, I actually like talking to you.”

“Wow, thank you.” She chuckled. She had stayed in Vale Valley a couple of weeks, and had found that Brass wasn’t being mean, or blunt. This was simply who he was. There was no underlying motive. He loved to fuck, ride his bike, and party. The partying wasn’t really her scene, and apart from going to see Knuckles and Beth’s wedding, she hadn’t participated in any of the parties. She wasn’t going to give Brass a reason to send her on her merry way. She was known for being a stick in the mud, and right now, she wanted to enjoy the small freedom she had been given.

There would come a time she had to give up, but until then, she was going to try to keep this happiness for some time.

“It’s not that, babe, you know it. I just—he told you that you were fat and ugly.”

“Yes. His demands in marrying me were that I’m to give the show of loyal, forgiving wife, and even though he can have a man of his own, I’m not allowed any.” She shrugged. “I guess this is what you call a little rebellion. Sounds great, huh?”

Brass put down the coffee and bag of food down. Her stomach chose that moment to growl. “You’re hurt?”

“No, I’m not hurt.” She blew out a breath. “Okay, maybe I am. Growing up I always wanted to have the kind of marriage you read about in books or see in the movies.” She felt the tears starting to build, and she took a breath. Years of keeping them at bay, the training wasn’t forgotten, and she wasn’t about to spill them over. She stared down at her hands. “It’s silly.”

“It’s not silly.” He placed a finger beneath her chin and tilted her head back. “Never believe that something like that can be silly. Wanting that kind of shit, it’s natural.”

“No. I didn’t want to be. My folks were constantly at each other’s throats,” he said.

“My parents pretended the other didn’t exist. I’m not trying to get pity or anything. It’s just the way it is.” She pressed her hands against his chest, not to push him away, just because she wanted to touch him.

“I am. It’s just … talking with my dad always makes me feel like I failed. Like I fucked up big time.” She tried not to care what he thought, but the truth was, she did. She cared a lot. “I can’t even marry the right man.”

Brass stroked her cheek, and she stared into his eyes, finding comfort in his stare. He was big, so powerful. She loved it when his muscular, inked arms surrounded her. The way he groaned each time his cock plunged inside her as if he couldn’t hold in the pleasure.

He slammed his lips down on hers, and she wrapped her arms around his neck, forgetting about the coffee, and everything else. His hands were on her back, pushing up her sweater, and flicking the catch of her bra. She should care that he knew how to do that, and with such ease, and yet she didn’t.

His experience was her gain. Brass shoved her against the wall, and gathered up her skirt, and tearing away her panties. “What have I told you about wearing these?” he asked.

I&#039;ll read anything that Sam Crescent writes but the Trojans MC is a particular favorite of mine. As book seven in this series Easy more than lived up to my expectations. I couldn&#039;t put this scorching hot page turner down until the end. This story was sexy and suspenseful and the Trojan characters were super amazing. Brass and Eliza were the featured couple. These two spent a good portion of the story being torn about their feelings. Insecurity and fear kept undermining their relationship. Eliza was feisty enough to be a Trojan woman but she also wanted to protect Brass and the others. Brass was a possessive, bad ass biker with a sweet, romantic side. I really liked him. As usual, there was a lot of layers to this biker romance. Sam Crescent threw in plenty of drama and emotional situations and there was some loss that upset this reader. As it was the bad guys found out not to mess with the Trojans and I loved my happy ending. Easy is an all-around great Sam Crescent book. I loved it!

I love this series so much Sam crescent is just awesome with Herr words and she keeps the story going till the very end. Best damn book

You did it again I so sad the book had to end but as always you left me wanting more!

Another fabulous book for Ms Crescent. This was Brass and Eliza&#039;s story. Love how the club always has the brothers and sisters back, shows what true family is. Will be interesting to see if Pie&#039;s book is next...

Sam&#039;s books are always an auto buy for me and the Trojans are a favorite of mine. As usual Brass and Eliza&#039;s story doesn&#039;t disappoint me. Filled with love, drama, danger and an unexpected thing in the storyline. I love that we get to catch up with previous characters and we get glimpse of future characters!! Wonderful story and can&#039;t wait for the next one!

This was so wonderfully written. You have your main characters , Brass and Eliza&#039;s , story being told and wrapped around that you have everything that&#039;s going on with other club members and their children. Brass and Eliza are meant for each other. Overcoming all obstacles for love. This book leaves a vast amount of room for future Trojan books. A MUST read for MC romance fans.

Brass and Eliza are just adorable!! Their chemistry is through the roof and so is their love for each other. So happy I got a look into the Trojan Life again and Duke showed everyone why he stilll the President of the Trajons... Duke did not disappoint!! I was so sad for Holly&#039;s loss... I wont lie, I did shed some tears there!! I can&#039;t wait for the next story... I&#039;m really hoping its Matthew!!

First I want to say is... F*** me! I got female version of boner for Duke. That man... *fans herself* I would say more, because here is lots of happening, but I still can&#039;t go past Duke stealing my heart again. And yup, he may even stolen spotlight from main couple. Lol.

Has always Mrs crescent has written a book where the reader is pulled into the story from beginning to end. I can&#039;t wait for the next one

I would absolutely recommend this book it went well beyond all of my expectations and I can&#039;t wait for the next book to come out!!!!

The Trojans have always been my favorite Sam Crescent series so I stop reading whatever I am reading to pick up a new one. This one did not disappoint at all. It was as great if not better than the others. It picked up right where #6 left off with Brass and Eliza still continuing there hot relationship. It was filled with plenty of heat to scorch your kindle! We also saw the continuing stories of past characters and the troubling story of Holly&#039;s true parentage. The only problem with reading these books is that I can&#039;t wait for the next one!

This was another great story. Love these Trojan MC men and how they meet that special woman, and they fall hard. This is Eliza and Brass&#039;s story, Eliza ran from her rich controlling father who had arranged a marriage for her to a guy of his choosing. The same guy who likes men rather than women. Brass is awesome with Eliza and realized that the more time they spent together, the more his feelings were growing for her and was not sure what to make of it. Then trouble comes in the form of an old enemy and a new one and then the unthinkable happens and everyone is left reeling from the shock and the loss of 2 of their own. I really love this series and can&#039;t wait for the next book. And hope its Kasey&#039;s book, who we met in Crazy and Leanna&#039;s book, she is the nurse who attended to Leanna when Crazy brought her into the hospital after she was shot. As Pie (who said that he will never settle down) showed an interest in her along with Chip another club member. Hmm wonder which one of them will fall next.