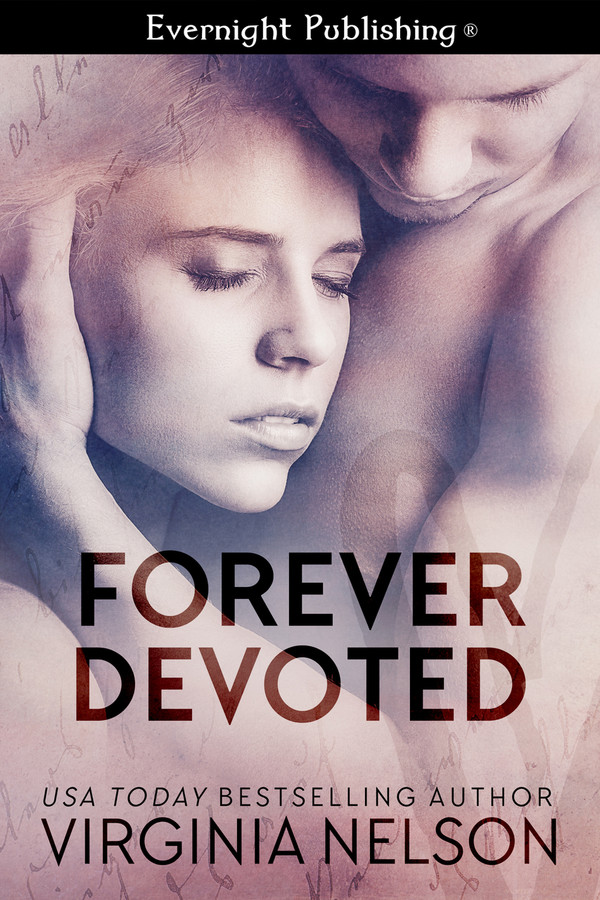 Robbie Jacobs is content being just one of the guys. For years, she’s run with her 'Pack', a group of rowdy boys she went to high school with, used to party with, and now leans on in times of trouble. She has a couple gal pals, sure, but none of them are as close as the Pack…

Gray Smythe has been the unchallenged leader of their group of friends for years. Stoic, determined, he’s managed to be there for them all through some crazy shit. But when Robbie, the only girl in their group, gets into a car accident, the line between friendship and lover suddenly gets a hell of a lot thinner.

He’s stubbornly determined to help her and love her, while she’s fighting to win back her body and her independence… Can Robbie believe Gray is actually Forever Devoted?

The room smelled like rubbing alcohol and, strangely, old feet. Tapping on the window, Gray forced himself to resist the urge to stare at her, as if he could will her back to herself with just his eyes. Gazing at her wasn’t going to wake her up, and no matter how many of the doctors insisted she could hear him, he knew better. His Robbie wasn’t in there, not yet. He wasn’t going anywhere until she was back, though.

The door swung open with a nearly silent swishing of air, and he snapped his attention that direction in time to see Rowdy and Twinkles shove their way into the room. “She up yet?” Twinkles demanded.

“No.” Unable to continue resisting, he looked at her tiny form shrouded in a sheet and wired by tubes to various electronic devices keeping her alive. For someone who was such a huge part of his life, she took up a frighteningly small portion of the hospital bed. “Still not responding, but if one more doctor comes in here and tells me how to treat her, I’m going to scream.”

“What do you mean, how to treat her?” Twinkles’ face crunched in annoyance.

“What to say, what not to say, how to touch her … they’re driving me nuts. They don’t even know her.” Gray gritted his teeth together, suppressing a wave of an indescribable emotions. None of the nurses knew her, not like he did, so having them tell him how to behave grated on his already frayed nerves. If she’d just wake up…

“She’s going to be okay, right, Gray?” Rowdy might be the biggest and loudest of the Pack, but he’d always been their gentle giant. As Rowdy stared down at Robbie’s prone form, Gray would swear the big guy’s eyes were tearing up.

“She’s going to be fine. Better than ever. You know our girl—she’s a hard-ass.”

Gray wished he believed his own words.

“Hey, Short Stuff, be great if you woke up and rejoined the land of the living. Promise to only harass you a little about your grand act of stupidity. Come on, gal, get back to us.” Twinkles squeezed her hand, and the machines beeped on. The three of them stood there, in silent vigil to their fallen friend, before Rowdy broke the tense moment by clearing his throat.

“You need anything, buddy? You look almost as bad as she does.”

Twinkles abandoned the bedside to clap a hand down on Gray’s shoulder.

“I’m fine. Don’t worry about me.” He’d not been sleeping, other than dozing in her chair. Her family wasn’t here—pretty normal for their group—and he refused to have her wake up alone and scared. “Get back to your wives and kids. I got this. I’ll call you the moment she wakes up.”

“Take care of you, too, asshole.” Rowdy gave him a halfhearted playful shove before they both vanished back into the hallway. If Gray knew his boys, they’d stop at the nurses’ station before they left. Probably flirt a little––see if they could weasel out more nuggets of information about Robbie’s status.

But they had families to get back to. Gray…? Didn’t. Back in school, he’d accepted the fact his alcoholic father didn’t have time for him and that nobody gave a fuck what happened to him. He’d accepted he was a worthless piece of shit from the wrong side of nowhere, bound for a great and glorious future either working in a factory or some other job he’d hate just to afford booze like his old man. But then he’d met Robbie.

Her family wasn’t any better than his. Her father spoke with fists, not words, and her mother had been cowed into silence long before Robs was old enough to understand the way the world worked. She’d been a scrawny little thing, looking more like a stray kitten than a girl with her dandelion fluff of hair sticking out at odd angles because she’d cut it herself. And they’d adopted each other, become the family both needed so desperately. Eventually they’d picked up Rowdy and Twinkles, two other kids in need of someone who cared, and they’d all stuck together in a way only people bonded by real need would understand.

Robbie, though, she’d been the first. She wasn’t just his best friend. She was family in every sense of the word.

And now, because of one bad choice, she lay on a hospital bed and might never wake up.

Dropping into a chair, he rubbed a hand hard over his face as if he could shove all the worry back inside physically. He should have stopped her—he’d known that asshole Jason had drunk too much to drive, and he’d known Robs had drunk too much tequila to be logical—but he’d let her go. What if he’d stopped her? Sure, she’d have been pissed off, but she’d have gotten over it. Shit, he could’ve bodily hauled her out of that bar and into a cab…

None of it stopped the damned beeping or the too-slow rise and fall of her chest. But wait: Were those beeps faster than a second ago? Was that a good thing or a bad one? Should he call a nurse?

Leaning close to her, he studied her face, searching for anything. A twitch, a move, any change.

Had her eyelashes moved? Even a little?

After watching her so closely that his eyes began to tear up from not blinking, he leaned back. No, nothing. Still the same. Still she slept and didn’t respond. He moved back to the window and resumed his tapping. She’d wake up soon.

This was an excellent book. The two main characters were lost and disposal children who bonded with each other. It is a beautiful story of two hard headed people that takes a serious car accident to realize how much they love and accept each other. Really enjoyed this book.

Her Sexy Skunk by Virginia Nelson