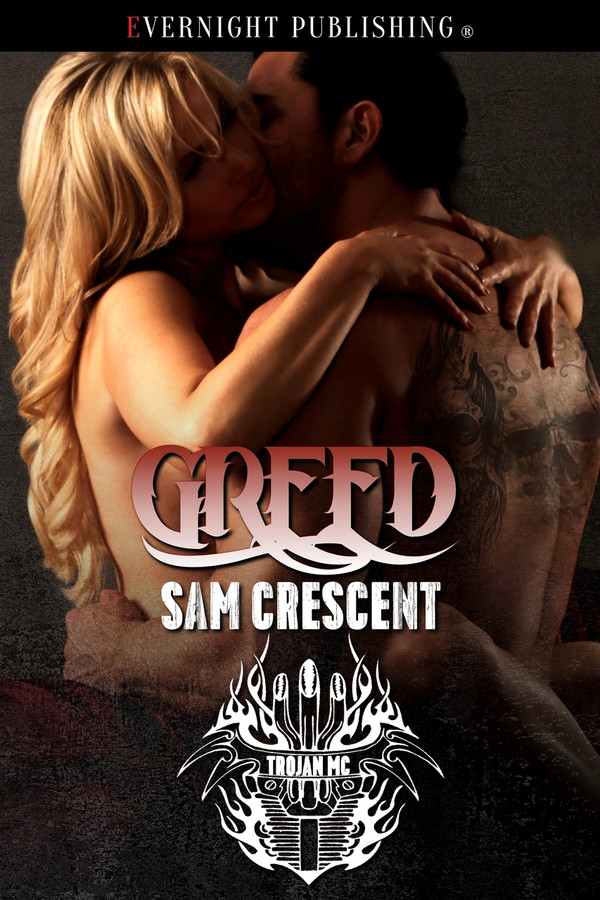 All it takes is one night to change everything.

Pie and Lindsey have an unconventional friendship—and they have an agreement to help each other find a partner. But Pie’s not interested in finding anyone, and he certainly doesn’t want to see Lindsey with another man. Then one night, when Lindsey is trying to broaden his horizons, the dynamic of their friendship shifts, and there’s no turning back, even though Lindsey is afraid to face the changes.

When Pie goes to Lindsey to face the issue, he finds her being viciously attacked by her boss, and Pie snaps. Killing her boss is the only solution, but now he has a dead body on his hands. Now Lindsey has to be strong so no one finds out the truth of what Pie did. She’ll protect him and the Trojans MC with her life.

With nowhere to hide anymore, Lindsey has to face the fact she’s in love with Pie. They are no longer just friends, and Pie’s a greedy bastard. He wants Lindsey as his old lady, as his wife, in his bed, pregnant with his child, and he’s willing to do whatever it takes to get her there.

“What about her?” Lindsey asked.

Pie wasn’t interested in any of the women that were dancing at the club. There had been a big party planned as it was Friday night and of course there was a new sweet-butt joining the club, so later on, several of the guys would take her.

For the first time in a sweet-butt initiation, Pie wasn’t interested, not even just a little bit. No matter how many chicks Lindsey picked out for him, none of them held his interest. Wrapping his arm around her waist, he pulled her close.

“Will you stop for tonight?” he asked, kissing her neck.

She sighed. “But how am I supposed to make you find your happiness?”

He smiled against her shoulder. “I can think of quite a few ways you can help me with that.”

“Wow, are you flirting with me?”

“Baby, I always flirt with you.”

She laughed along with him. “I think I like it. I should see all your moves. Make sure you’re using the right ones.”

“Believe me, I’m using the ones that count.”

“Well, let’s see, shall we.” She looked over the dance floor, and he didn’t like where this was going.

When she made to pull away he reached out, grabbing her arm. “What do you think you’re doing?”

“I’m going to see if we can put your charms to the test.” She winked at him. “Watch and learn.”

He wasn’t interested in picking up women or having someone near him right now that was anyone but Lindsey. Shit, he didn’t want any of this. He’d been playing along for some time now, but the truth was, he was greedy. Really fucking greedy as he wanted her all to himself. She wasn’t ready for that though.

They were close, and he’d even go so far as to say they were the best of friends, but he wanted more, so much more.

That sexy gasp she made when she came.

He’d heard her come in the shower. How breathless she’d sounded and sexy.

He wanted her now.

He wanted her for forever, and nothing was ever going to change that. Not now, not ever.

Sam Crescent delivers another raw yet romantic MC contemporary romance. I have been anticipating Pie and Lindsey’s story and I most definitely was not disappointed with this. I felt as if I got to know them so well and I loved watching them dance around one another when everyone but them seemed to realize they were perfect for one another. Lindsey is a happy woman. She seems to make the best of even bad situations. Her open and carefree attitude and lifestyle isn’t just a gimmick. She really is just a nice woman who is always smiling. As a club member Pie is by no means a sweet guy next door hero. He’s rough around the edges and operates outside of the lines. But he isn’t cruel and he has a big heart. I enjoyed getting to see some familiar faces but I believe if I hadn’t read previous story’s about this club I would still enjoy this one as a stand alone. The chemistry between these two is absolutely amazing. I mean honestly it felt like my eReader was melting and I just couldn’t get enough. If you like your romances with a little darkness and a whole lot of desire this is the perfect pick. The Story: Pie and Lindsey are best friends, even going so far as to help each other find a compatible partner but Pie isn’t interested in anyone but Lindsey. He wants her to be his old lady, have a family with her. When something happens that changes everything Lindsey discovers how deep her feelings are.

This is one of my favorite Trojans MC books. My first favorite is the 1st in the series, but each one is good. I loved the friendship and eventual love story with Pie and Lindsey. Pie is such a badass but also a romantic. I couldn&#039;t put this book down until the end and then was wishing it would keep going.

I think of all the series that Sam Crescent writes the Trojan’s is my favorite of them all. I always love when a new book comes out and no matter what I’m reading I will stop and read the next book. Lindsey and Pie turn a great friendship into a great relationship and the steam level was the usual Trojan hot, hot hot! Didn’t see any sweetbutt drama this book which was surprising but actually not disappointing. However, somehow after reading Greed it almost seems like this might be the end of the series and I am still dying to see a book about Diaz!

I missed Trojans. I love to meet previous couples and see how they are doing. And now about Greed. I loved Pie. He was great. The safety followers will love him. But I wasn&#039;t a big fan of Lindsey. I don&#039;t like pushy people and she was too much into finding Pie his &#039;the one&#039;. Which by the way, is their agreement, to find each other &#039;forever&#039;. But honestly, every time she did that, I wanted to shake her hard. Lol. And because of that, sometimes I had a hard time believing of her feelings for Pie. Unless, she was trying to get temptation out of the way? Pie acted opposite, so even if he denied, when the club teased him about him and Lindsey, I still could see how he truly felt. Well, actually you probably can see how both of them felt about each other by the way they acted around each other. Which by the way was frustrating and funny at the same time. They kept denying but theirs actions spoke for itself.