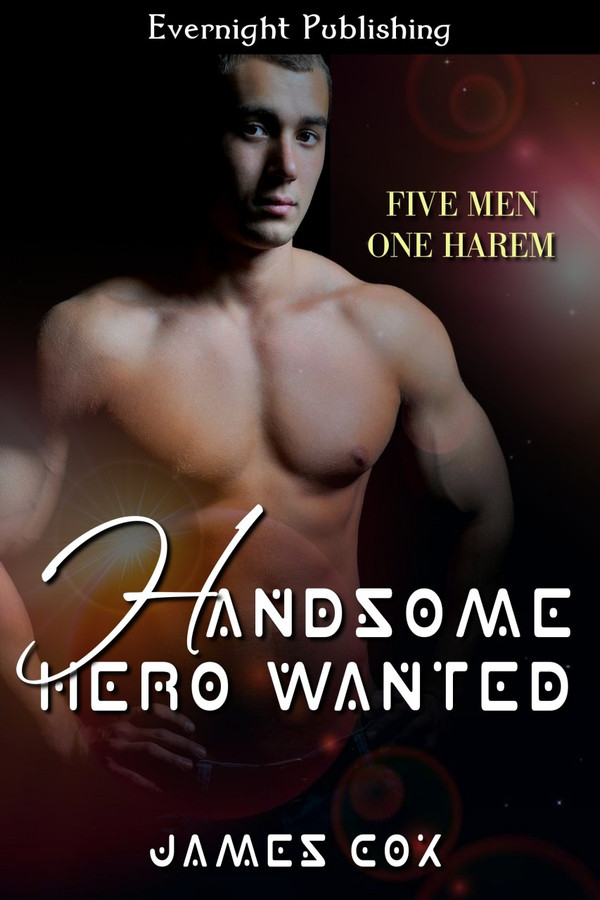 Drayton Starberg takes his ship to the planet Falla Bray to join a harem in hopes of scoring money to fix up his old space ship. He has to compete with four other human like species to please the king and be chosen to use his DNA for the new heir. Problem is, each of the other males are growing on him and the king is having a hard time picking just one.

Who will be the king’s handsome hero?

“Welcome,” the Falla said with a bow of his head. All the men in the room went quiet, and he saw several of them adjust in the velvet seats. “Gratitude for answering our ad. We do have some requirements before we proceed.” Two more Fallas came from the stage and went into the crowd. Each had that light blue skin and that blond white hair. These two were dressed in ... well ... they looked like skirts to Drayton. Maybe some form of kilt. It was sexy as hell as, the two Fallas showing off long, lean legs. “We are looking for males that are not averse to interaction between other males.”

“You mean like butt sex!” a hairy thing called out, taller than seven feet and seriously hideous.

The Falla nodded his head. “Indeed. There are no women on this planet.”  There was a grunt from the hairy thing, and he stormed out the open doors. No one followed, and the Falla continued. “There are two servants going around. They will need your name, and they will measure the length of your penis to be sure you meet the requirements.”

Fuck. Drayton shifted his neck from side to side and then cracked his knuckles. Soon everyone would know he had an erection to break steel.

“And what if we have two dicks!” someone in the crowd called out.

Despite Drayton’s craning neck, he couldn’t find the speaker.

Falla responded, “We will make a note and measure both then.”

Drayton watched as men began to pull down various forms of garment to reveal their dicks. Some made his mouth water and his dick leak. Like that guy to his left who was built like a warrior from the old earth. He had muscle upon muscle and his hard dick bobbed out of his pants like a gift. A Falla who stood before him with a small flat screen and a measuring stick blocked Drayton’s vision.

“Name?” the voice purred to him.

The Falla made a note on the screen. “Please remove your clothing so I may measure your penis.”

How could those words be emotionless and arousing at the same time? Drayton dropped the bag from his shoulder. He then unzipped his jeans and slid them down so his cock slipped free. The length curved, jutting forth and practically begging to be touched. Damn it, it hasn’t been that long since I got some ass.

The Falla’s blue hands reached out and wrapped around his dick. It took all of Drayton’s will power not to groan as his cock was tugged and then the cold measuring stick was placed against his taut skin. He bit the inside of his mouth as the Falla got to his knees to read the measurement. This sexy thing was inches from his dick, and he stared down. Enjoying this way too much. Then a drop of pre-cum oozed from his hole. Well, that was sort of like starting the show before the curtains were up. The Falla nodded his head and then swiped a finger over the liquid. This time Drayton did groan, short and low. The Falla stood, made a mark on the screen and nodded. “Very nice. You may cover up your penis.”

Drayton nodded, not trusting his voice. He maneuvered his erection back into his pants and very, very cautiously zipped it up. His cock now pressed heavily against the cold teeth of the zipper. He glanced back up at the stage and saw the two Fallas moving behind the curtain. Two men were asked to leave, and Drayton held his chuckle. Apparently, they were too small for the job.

“The remainder will now learn of the ad details.” The Falla on the stage got everyone’s attention and the rooms became a series of horny men trying not to groan. “Falla Bray is led by a single man. The king is looking for volunteers for his harem. It is a week and you will be paid ten thousand coins for your participation. You will be asked to obey the king as if he were your master. You will live here on our planet until a choice is made. One man will be picked as the best in the group. That being’s DNA or sperm will then be used to create our next heir, the prince of Falla Bray. The one who is chosen will get an additional payment and may be allowed a permanent residence on our planet. We are in need of a hero to give the heir new genes. Will you be our hero? You have met the penis size requirements. If you would like to participate and join the king’s harem, please step through the door.”

I really enjoyed this book. I&#039;d go so far as to say I loved it. Any story that gives me aliens with all sorts of penises...different sizes, shapes, colors, and even a guy with TWO of them...is a story for me. I liked how all of the characters mesh with each other. Even the background ones play an important role in the plot. I also liked how Mr. Cox doesn&#039;t take himself so seriously. There is a lot of humor in &quot;Handsome Hero Wanted&quot;. I laughed A LOT. What I got from this one was a unique and fun storyline, a lot of sexy men in a lot of sexy situations, and a very satisfying ending. It was a great way to spend my Sunday evening. I highly recommend this book.

This book starts with the following paragraph. “Handsome hero wanted. Brave in the face of certain danger. Must be willing to get naked with other species. At least six-inch penis required. Fee is negotiable.” Seriously? I was hooked immediately! :-) Drayton Starberg answers the ad on the planet Falla Bray, a planet of all males. There are no female Fallas! How do they breed future generations? Well it turns out in the case of the king that he will mate with one of the five men chosen for his mating harem. What follows is a delightful romp full of constant erections and copious amounts of pre-cum. We have a LOT of alien bukakke, we have a feline humanoid named Lavender, a big butch hairy wolf humanoid named Layden, a tailed chameleon humanoid named Ashthor and a humanoid with two penises named Dusk! Finally, we have Captain Drayton Starberg of Earth. What ensues is lots of interspecies sex and I’m talking lots and lots of sex. Who will be chosen to be the father to the heir? I loved the story. It was a fun evenings read.

I have to confess that this was my first book with Aliens of all kind possible, i really enjoyed reading it and wasn&#039;t disappointed. Right from the beginning i just devoured every word till the last page! The writing is easy, sexy and humorous and you really get caught with it&#039;s smooth flow. But what caught my attention on first place, were those sexy characters all the way. Just one word: delicious! All of them are sexy handsome hunks you want to bury your fangs and nails in. So the sex scenes, in particular the little smutty orgy, just got my mouth watering and longing for more But all guys aren&#039;t just some pretty faces with tight asses, broud wide chest you wanna nibble and lick all the way and beautiful &quot;attributes&quot;, they have feelings and their own thoughts, too, and that makes them complete and really really loveable. The only Thing i have to complain about is how short that Story is. But lucky us, there will be a second book...and a third..! So excuse me while i hop to the second book.

James Cox never ceases to amaze me - he is totally outrageous! as this book proves. Now I have to say that if you are looking for in-depth, classic reading material, this is definitely not for you - &quot;Shakespear&quot; he is not, he is more in the realms of &quot;Coxspear&quot;, totally unique and individual. With lines like &quot;It was time to see exactly what he needed a big penis for&quot; kind of gives you a hint at what you are letting yourselves in for. It may not have been the author&#039;s intention, but I have never laughed so much before when reading a book (I do apologies author, but it&#039;s true!). Goodness knows what must go through his head when writing, when he comes up with characters having - permanent hard-on&#039;s, multi-coloured penis, one even having two penis&#039;s (Yes, two) and a twink! What a combination and as I have already said &quot;would love to know what goes inside that head&quot;! I got this book at the bargain price of 77p - yes, the price of a bar of chocolate! If you are looking for a fun-filled, really sexy book at a real bargain price, you&#039;ve just found it! For the fun factor alone, it&#039;s worth 5*!

“Handsome hero wanted. Brave in the face of certain danger. Must be willing to get naked with other species. At least six-inch penis required. Fee is negotiable.” Are you man enough to answer the ad? Space captain Drayton was. James Cox’s “Handsome Hero Wanted” is a fun short story about a space ship captain who needs some money to fix his ship and he answers the above ad to get some. It seems simple enough but what human Drayton finds out is that he is required to be a part of an alien king’s harem for one week. He and some pretty cool alien types are selected to fulfill the Falla Bray king on his home planet. And there were some cool alien species introduced. The planet of Falla Bray was interesting enough but some of the species. Here’s a sample of the five different aliens introduced: Dusk is a giant alien with double cocks. That’s right, two! Side by side! with two sets of balls. Say what? *stares* I know! Or the Falla Bray king Ranix whose semen tastes like salty cinnamon. *blinks* *gasps* And Ashthor, the chameleon alien with the color-changing, sparkly cock and tail that can be a penis substitute. That’s right, I’m saying there was more than one tail sex scene, folks! And what’s even cooler was the color changing penis…imagine the possibilities! If you read this blurb, it’s an orgy of six, hot, virile men. Some with special dick powers and moves. This could be classified as a long one-off, literary porn, if you will. But there’s some substance and a cute story to go along with the cock buffet train. The week long stay is a Survivor-like contest of sorts where each harem participant must obey the king’s sexual requests. (sometimes there’s even extra help: hint-a group jerk off) Orgiastic, light fun with a lot of naked men and their erections to found in this story, lots of stiff pricks and streams of cum. Forget this story ending with a happy ever after (it does), it ended COCKS ever after!

If you love man man love, fantastical creatures and hot hot sex, then this is the story for you!

Heart of a Hero by James Cox