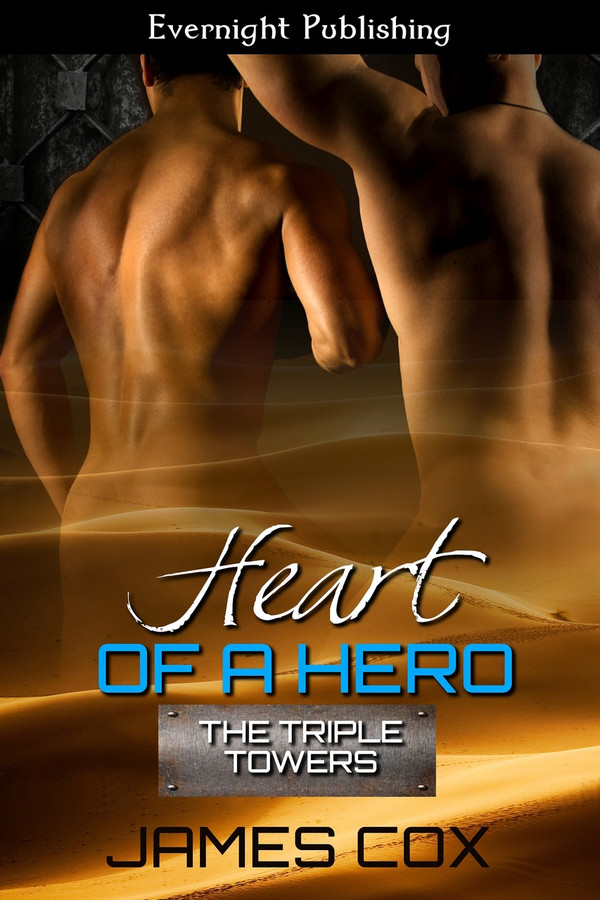 He made it to paradise on a lie...

Kallen is a hero. He single-handedly ended the war. At least, that’s what everyone thinks. The truth is that he was at the right place at the right time. As the hero, he gets free drinks wherever he goes, a room in the heavenly triple towers, and enough mouths on his body to please him every hour of every day. However, guilt and danger rise when a man starts searching for the truth. When the investigator turns out to be incredibly sexy, he may just blow his secret among other things.

Lorn is furious when the spy among them is named as his dead younger brother. He is determined to find the truth of what happened even if it means destroying the nation’s hero or the man he’s slowly falling for.

In Kallen’s world, bravery will get a person killed, so how exactly is he supposed to prove to Lorn that he has the heart of a hero?

Kallen couldn’t look away. The way his muscles moved, son of a fucking fool, he felt pre-cum drip down his shaft. The compulsion to just reach out and touch Lorn was undeniable.

“We’ll eat something.” He stood.

“And take a piss break.” Kallen needed to relieve his bladder. He glanced at the sheer wall as he stood. “I didn’t realize you had a kinky side.” He grinned. “Care to watch me take it out?” It was a jest but his voice went husky.

“No.” Lorn went to the AFC and hit a few buttons. The machine gurgled as he turned around.

“Oh, just admit it. You want to suck my cock.” Kallen walked to the bathroom door.

“The man that got my brother killed and lied about it to save his own ass...no, I have no interest in your penis.” Lorn folded his arms over his chest.

“You’re just trying to be mean.” Kallen opened the door. He knew Lorn was just trying to put more distance between them. “You know damn well I had nothing to do with your brother’s death besides avenging it. And you know why I lied.”

Lorn snorted and uncrossed his arms. “You’re very flirty with a man that could snap your neck.”

Kallen felt brazen so he left the door open. He passed a huge shower area and walked to the plain white seat that constituted a toilet. “You think I’m still afraid of you. The moment you didn’t kill me I knew you wouldn’t. Besides, I can see your tented hard-on from here.” Kallen grinned. He was having fun teasing the always-serious Lorn. He tugged the material until the Velcro opened. His fun nature fled as he pulled out his thick cock. The thing was begging for some attention. It was curved and the head still had a bit of pre-cum on the foreskin. He aimed it with his right hand, the stream of piss that followed echoing. Kallen then glanced up to see Lorn had indeed shifted and was watching him. It was such a fucking thrill that the moment his bladder was empty, Kallen stroked his cock from base to tip. He groaned, the sound unexpected, from the surge of pleasure.

The next moment Lorn was marching toward him. Kallen wasn’t sure by his expression if the master sergeant meant to harm or pleasure. They were suddenly in the same small bathroom with Kallen’s cock still out.

“Do you think this a joke? Teasing the beast.”

Lorn held another frown on his face. “If we were to ever mate, it would be more than a quick, meaningless fuck. I am not a man to be taken lightly, nor will I take you as such.”

“Because I’m a Wastrel?” Kallen asked. His voice was gruff.

“No. And not because you lied about being a hero. I do understand your motives. However, we have a spy on the loose and I cannot have that person creating havoc on the towers while my cock is plowing your hole.”

“Prove yourself trustworthy. Prove that you have the heart of a hero and our time will come.”

Just like the headline, this book was fantastic! I loved every part of it. There was action, suspense, a little bit of violence, and a mystery that sucked me in and kept me in until the last page. Oh, and can I mention how HOT Kallen and Lorn are when they get together? YUM! I loved the world that Mr. Cox has built. Future dystopian is a favorite of mine. The division between rich and poor is huge, and since this is the first in a series, I&#039;m going to assume that this will be explored further. I can&#039;t wait to read the next installments. The pace was quick but not so quick that you are lost. The plot is extremely well thought out, and the characters are as well. I love how the relationship between Kallen and Lorn builds up rather than having them just jump into bed. Even though there is nothing wrong with that, but by making their love story gradual, I was able to become invested in it and root for them. I&#039;ve become a huge James Cox fan. I enjoy every story of his that I&#039;ve read. He&#039;s now an author whose books I will automatically buy when they&#039;re released.

Like any other book of James Cox I just had to read and love this one as well! With the first book of the Triple Towers series James has created once more a new world with some action, suspense, a little romance and , of course, some kinky sexy scenes that will make you fan yourself. Kallen is a hero, maybe not because of the things one thinks he has done, but a hero of hearts for sure. Especially that one heart... Finally inside the heaven-like area of the Triple Towers he learns to love his new life. But when Lorn crosses his way to reveal the truth of Kallen being not the hero at all and to show that Lorn&#039;s brother wasn&#039;t a spy, Kallen has to be careful. Will the big &quot;ice sergeant&quot; be his ticket into a new exil out of heaven or will he melt the ice and fall for Lorn? Will Lorn resist the feelings for the cute little blonde or will he find his longings and desires be fulfilled and fall for the heart of this sexy hero? James, I love your sexy guys and I can&#039;t wait to read the next book of this series!

Heart of a Hero” is book #1 of The Triple Towers series, set in a dystopian United States in the year 2095. The world has changed, the natural resources have become scarce – sand dunes have taken over. The wealthy left the poor to fend for themselves and built three towers to live in. They built a large wall to separate themselves to keep the wealthy in and the unwanted, diseased out. The poor have been named “Wastrels”. The towers are the new United States and Wastrels are not allowed inside. Kallen is on tower patrol, a Wastrel soldier, who was in the wrong place at the right time. Murders of the enemies happen and Kallen witnessed the entire thing. So when he’s mistaken as a hero and offered a hero’s life including life inside one of the Towers…he takes the golden opportunity. The life of a hero has perks including dick sucking and gobbling…this is a James Cox book therefore erections are getting major spotlight. Kallen’s cock is uncut, thick and perfect for blowies! Before you pigeonhole this story as spank bank material, wait! There’s a plot. Those murders? One of the murdered is the brother of the highest ranking soldier in the Towers named Lorn. And he knows his brother was wrongly accused and finds Kallen to be a liar. But he can’t stop picturing bending Kallen over and thinking about his puckered hole even though he should hate the man. So the two have hot sex and work out their differences in the bed, the shower and on top of an inflatable sex toy *grins*, all while trying to solve a mystery and find a traitor. I have minor quibbles: a few plot thread bumps like Lorn is not as dominant as he thinks he was. Also, I think the world building could have been more defined. The story gives a little over the bare minimum but the world was interesting enough to delve deeper. This did not detract from the main plot line but it was noticeable. However, this is a series, so I am sure the bumps will smooth out as the story progresses. Who would best enjoy this story? Readers who want to explore in some futuristic suspense but not get too involved in a heavy read. This is pure James Cox and he brings the cocks, so be prepared to be aroused. And this story has more depth than say his Handsome Hero series but it still brings some fun (um, flavored semen anyone?) The story ends with a slight cliffhanger with a HFN that has a possibility for HEA. I definitely will be reading more of this series.

I enjoyed the interaction between the two men, especially once Kallen got over being afraid of Lorn. Mr. Cox does a fantastic job of creating characters that can be cared about, and my heart wanted good things for them both. The one-liners punctuated the story well. Just as the characters dug in, BOOM!, the spy was revealed. I will certainly seek out the next book to see where the characters go from here.