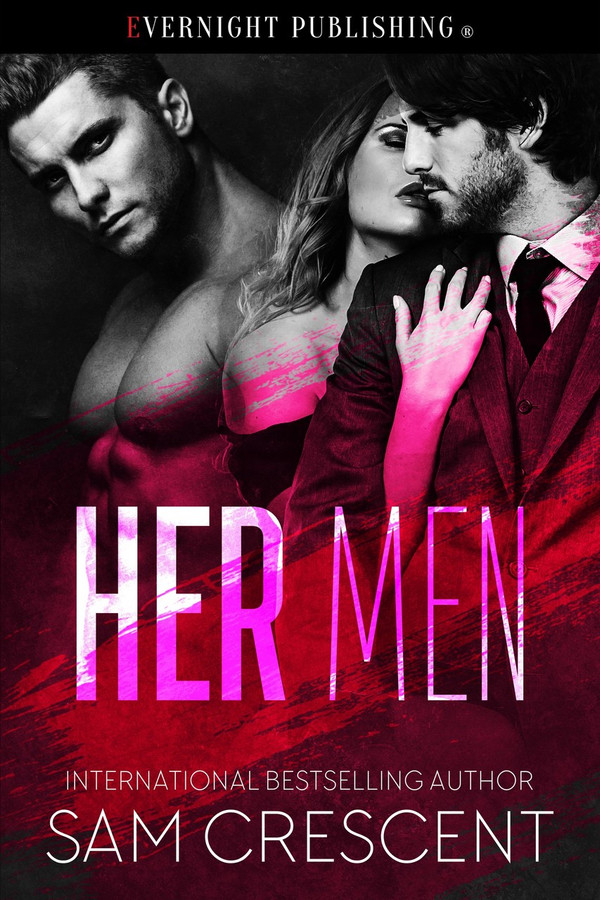 No woman should ever dread her wedding, but staring into her husband’s eyes, Abby can see the hatred shining back at her. She’s been blackmailed into marriage and now belongs to a man who thinks she’s a gold-digging whore. Not the best circumstances to start a marriage.

James has a secret and has been blackmailed into a marriage he doesn’t want in order to keep his private life out of the press. Even as his wife sweetly smiles at him, he can’t allow himself to believe that she’s innocent in all of this. He has a plan to make sure this marriage doesn’t last long, and he’s going through with it!

Abby doesn’t trust James, but she doesn’t want to be miserable and wishes there was something she could to do to help him—and herself.

What is his secret? Why would he marry her to protect it? And why is James more than happy to have another man join them?

Abby stared up at her husband, feeling this overwhelming desire consume her as he teased her clit. He used two fingers, stroking her, making her moan as he got her so close to orgasm but didn’t let her go over the edge.

He moved her up the bed so that she lay against the pillows.

“Keep your legs open. I want to see how wet you get.”

His wicked words were turning her on.

He didn’t follow her up, and she watched as his face came level with her pussy.

“You know I couldn’t go another day without having a taste of you.”

She watched him slide his tongue along her slit, and she gasped. He swirled his tongue against her clit, and need consumed her unlike anything else. His shoulders were in the way of her closing her thighs, and he held the lips of her sex open. She was completely at his mercy for him to do whatever he wanted to her. She didn’t want to fight him, and as he teased through her slit, she cried his name.

She wanted to come so badly, to feel him driving his cock deep within her. She didn’t want him to stop, hated for him to.

He didn’t stop though.

James kept on teasing her clit, licking at her nub before sucking it inside his mouth. She closed her eyes, arching up to his touch.

“So fucking perfect. Such a nice, juicy cunt, and it’s all mine. No other man has known this pussy.”

In the back of her mind she thought about Drake.

She’d never been with him, but the only other man she’d felt arousal for was him.

The man that kept appearing around the house when she felt lonely, his sweet smile touching her heart.

Pushing him from her mind, she focused on James, on his tongue, on the feelings he kept inspiring within her.

She was falling for him, and she had to protect herself. He wasn’t the kind of man a woman fell for, or at least not her, but she was. His sweetness shone through, smashing their previously bad memories.

“Come for me, Abby. Let me hear you scream it.”

He teased her clit, and the pleasure built, her orgasm taking her by surprise as it suddenly struck her hard. She couldn’t think as she cried out his name. Arching up off the bed, she quivered beneath his touch, feeling her cream leak to her ass.

“So beautiful,” he said, pressing a kiss to her pussy before moving so that he was settled between her thighs and his lips were close to hers.

His mouth was slick, covered in her arousal.

“You taste so good,” he said. “I could lick your pussy forever.”

When he kissed her, she didn’t push him away. She was ready for this.

Kissing him back, she felt his cock between her thighs, the head of his shaft sliding between her slit, bumping her clit.

She moaned his name, needing him.

“This is going to hurt. You know that?” he asked.

She nodded her head.

His cock was poised at her entrance. He didn’t fill her. He held perfectly still, watching her.

She was ready. She wanted to belong to him, to be his in every way that counted.

Not because her mother had told her to or ordered it.

Not because of the threat of being put away hung over her head.

She wanted this because of James.

He slammed to the hilt within her.

The pain was instant, shocking her in place as he tore through the thin skin of her virginity, claiming her for himself.

I like this type of stories. Blackmail. Forced marriage. Asshole H at the beginning. But... So okay, this story does has all I listed and some more and it would be ok book, but there was something I struggled with. Or more correctly someone. Abby. In overall she wasn&#039;t a bad character, it just I would had liked that she stood up for herself, had been a bit selfish and thought more about herself and her needs, instead of listening and following everyone&#039;s else orders. Abby was just too soft, submissive and trusting for my taste.

This is going to be a short review as I do NOT want to spoil the story. Basically Abby is forced by her parents to marry James. In turn, the parents are blackmailing James to marry their daughter to keep his secret!! I will say that I spent the majority of this book hating James but as things are slowly revealed, I came to love him. There are reasons why but I can&#039;t reveal them! LOL My only complaint is that I wish Abby would have been a little bit stronger and wouldn&#039;t have taken what James dished out to her but I can see where she would act like that after being treated so horribly by her parents, all her life. So in that respect, I&#039;ll give her a pass. All in all, this was a wonderful book and I loved it!