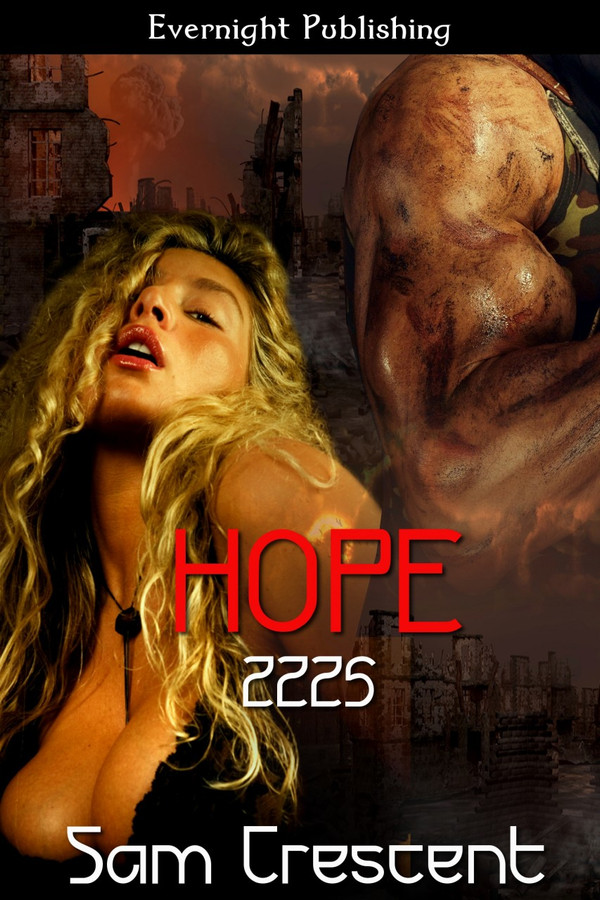 Damon Wright is alone in the world. His family was taken by the flu that wiped out half the population. Now, like many men, he fights to survive. One night on his way home, a terrified scream changes everything.

The thought of being sold like meat is what motivates Penny to run from home. The man who saves her couldn’t be further from a white knight. He has bruised knuckles and a bad attitude.

Damon is struck by Penny’s innocence and beauty while Penny can’t get the rough-talking, older man out of her mind.  In a world gone mad, how can they consider a future together? The only thing they have is hope.

Penny felt his touch right down to her core. Her pussy was dripping wet. The panties she wore would be soaked with her arousal.

He cupped her cheek, tilting her head back to look at him.

“We can stop right now.”

Her heart raced inside her chest. She felt the ridge of his cock pressing against her stomach. Damon laid her down on the floor beneath him. He captured one of her hands and held her tight against him.

“What if someone comes in here?” she asked.

“They won’t.” He kissed her lips. The tenderness of his touch startled her.  The kiss was the lightest of touches. She stared into his eyes waiting for him to do something rough or dangerous.

He took his time merely kissing her lips. He explored her mouth and made love to her lips with his tongue. She teased him back with her own touches.

She lifted his hand and pressed the palm against her aching breast. “I need you, Damon.” Penny bit her lip as he stared down at her. He looked at her with uncertainty.

“I’ve never been so sure of anything.”

“Once I take your virginity, I can’t give it you back.”

She laughed at his words. “I don’t want it back. I’m giving you something, willingly. I want you to have a part of me that no other man could ever have.”

He touched her lips with his finger. “You have no idea what you do to me.”

Penny thrust against his covered cock. “I’ve got a good idea of what I do to you.”

“That’s not all.” He stared down at her intently.

She didn’t ask him any questions. In her heart she hoped he loved her. Penny knew he owned her heart. She’d never be with anyone else. Damon was the man for her and had been since he saved her.

He moved over her. His large body crowded her. She lay back with her hands above her head submitting to him.

“I want you over me.” Licking her lips she stared past his shoulder trying to gain courage. “I want you inside me.”

He bent down, taking her lips once again. She was addicted to his fierce possession and overwhelming scent.

“Then make me yours, Damon. Fuck me.”

Hope was a pretty good book. It’s different than many of the books out there, but there was something missing. In the end I felt that there should have been a BOOM ending. When Grime was trying to start a war by going to the farmers, the scene was ok. More action should have been described to have you at the edge of your seat. But, the steamy scenes were fantastic! The beginning of the book just hooked me and I couldn&#039;t stop reading until I finished it. The only thing I would change is some of the action scenes. Overall this was a great read.

This author just keeps surprising me with each book that she writes. She writes many different books and just when you get used to one kind another comes out. Damon is known as Mad Dog just because he had to fight for his life for years and for his protector Don. So he has a reputation around the streets that everyone knows. Out of all four leaders Don is the one that protects his people the most. Damon works at a stripper bar and can get any woman he wants and he just goes through life everyday fighting for his home. All that changes one night when he goes home and hears a woman’s screams in his apartment building. He becomes Penny’s protector and will protect him with his life. In this day and age it is rare to find a virgin and to come and find out she is a run away. This book is written in the future and it is a future I don’t want to live through. Life as we know it isn’t the same. There is too many people and not enough food. They try to save it with this one little pill that has side effects no one saw coming. Now everyone has gone crazy and the survivors have to fight everyday of their lives for what little clothes and fresh food they can find. Not many know how to read or write and believe it or not pizza is just something of the past. The author did a great job describing all the destruction and pain that people of the future feel. It is hard to even be in love because they will kill the people you love. This is not a future that I want to live in. I wouldn’t want to fight every day of my life and maybe I get lucky every once in awhile to get fresh food. When you read this book it makes you want to do all you can to make sure there is not a future like this. Almost everyone has given up hope on it ever getting better. There are some that will never give up hope. The book was titled well and it goes along with the book. That is all people of the future has is hope that this will not happen and if it does that it will get better. The characters in this book are easy to love and understand. I love Penny because she brings hope to Damon and that is what the future needs. They fight for their love and fight for everyone else that they love. There are sometimes they even make me laugh. In this book you will find some of the greatest couples and some that you would never think would be a couple. Without each other and their love there is no future. So if you love futuristic books with love and hope this is the book for you.

To say this was a good book wouldn’t be doing it justice. The story blew me out of reality and into the violent world Ms. Crescent created. Everything about this story from characters to pace to romance even action was pure perfection. Click the buy link below because you have to read this book and sink into this beautifully written world. Hope by Sam Crescent is a masterpiece.

I really loved this book! I enjoyed the futuristic view of the world. I know that this is a new genre for Sam Crescent but she really hit it out of the park! I am looking forward to reading more in this series!

I know that this is a new genre for Sam Crescent, but this story was so awesome! Damon and Penny&#039;s story and the new futuristic world they live in was so well written that I couldn&#039;t put it down. I can&#039;t say enough good about this book. I highly recommend this book!