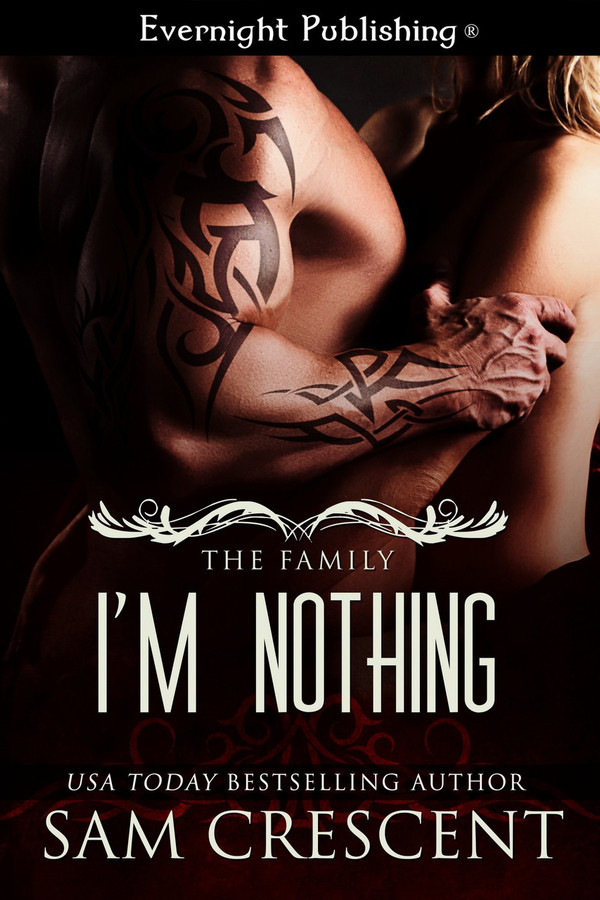 There is an uprising within The Family. They do not like young men taking over, and it’s up to Tonio, Donnie, Luiz, and Jake to take out the problems. But Tonio can’t pay proper attention to his new duties because his memories haunt him. He grew up in The Family with a secret he hasn’t even told his friends. His father would beat and torture him if he didn’t go down to the basement, and what Tonio had to do there turned him into a monster.

Zara is trapped. Her father died and left her with a debt she can’t pay, and she hates her life. When Tonio saves her from being raped and killed, Zara knows she has to help him. No matter how hard he tries, Tonio can’t keep the infuriating little virgin from getting under his skin—but he won’t give in to his feelings for her. Tonio thought he loved a woman once, but it turned out to be a lie, and he’ll never trust himself again.

However, what will happen when he does fall for her? Will Zara stay with the man who saved her, or will she run when she sees the monster lurking within?

He smiled. This was the first time a woman had ever trusted him with something so precious. All of the other women had been forced to be there, and he’d been terrified. With Maria, she’d been the one in charge, and he’d done as he was ordered.

Resting both of his hands on the inside of her thighs, he left her wanting more.

“At first it will hurt, and then it’s going to be amazing,” she said.

Opening the lips of her pussy, he stared down at her cunt, seeing how wet she was. There was a thin dusting of hair covering her pussy, and when he opened her up, he saw the swollen nub of her clit. She was soaking wet, and using his thumb, he circled her sweet spot, and she shuddered.

“That’s just my thumb, baby. I can make it better.”

He smirked. Leaning down, he spread her legs wide by using his arms to keep them open. Sliding his tongue across her clit, he heard her cry out his name.

Tonio loved hearing his name coming from her lips, and he wanted to hear it again.

“We’re only just getting started.” He sucked the whole of her clit inside his mouth, and at the same time moved his arms up to cup her breasts. He pinched her nipples and teased her in time with his sucks.

Changing from his mouth to his fingers, he moved up her body, sucking on her tits before, taking her mouth.

“Taste how sweet you are,” he said.

She moaned. “Please, why did you stop?”

He chuckled against her skin, moving back down to flick, suck, and tease her clit.

With his free hand, he gripped his dick, teasing up and down the length. He wanted inside her. Never had he felt this burning need to claim a woman for his own, and with Zara, he could make her his.

She called to him in ways that he never thought possible.

I usually enjoy all of Sam Crescent’s books and this dark, gritty mafia romance was everything that I had anticipated. This one packed a lot of emotions so that I was in tears within the first few pages and totally hooked on the story until the end. Sam Crescent created characters and situations that grabbed my interest and engaged me in their story. I felt so bad for Tonio. He suffered terrible abuse and felt conflicted about himself. The author had me sobbing in the first chapter, and I thought Tonio would grow up to be a psychopath because of what his father made him do, but he was actually very sweet and caring, except to those who threatened his family, of course. Then he stumbled across Zara and rekindled their connection, saved her from her own mess and uncovered a plot against his brotherhood of friends. Sam Crescent has written a dark, suspenseful and scorching hot romance with this second book in The Family series. I hadn’t read the previous book yet, but I loved this one so much that I’ll be revisiting this series quite soon. As usual, the author did a fantastic job in giving the characters plenty of problems to overcome and she made it sweet which should be contradictory to a dark romance, and yet she was able to pull it off with ease. I was completely engrossed in this short story and what a sweet epilogue for Tonio. I need books that have epilogues and actually hate it when an author doesn’t bother so this part also was special to me. There was even a teaser for Luiz that has me eager for his book, as well. That is another great aspect about Sam Crescent’s books is that she always delivers an entertaining story that will be special to the readers. This one was about hope, brotherhood and family. I was very happy with this book and look forward to the next one.

This book was so sad, and totally broke my heart. I felt so sad for Tonio and what he went through. The way he&#039;s father tried to break him emotionally and physically, just made me want to cry. He just needed so much happiness in his life. And I so agreed with Luiz, that Maria was a BIATCH!!! Zara was totally made for him, she didn&#039;t care about his past or what he did, all she wanted was him and she saw the good in him even when he didn&#039;t see it This series and what these boys went through is so sad, but slowly they are all finding their happily ever after. Can&#039;t wait to read Luiz&#039;s story. Another winner Sam

I felt so bad for Tonio to had to have done the things he did in his youth. I can&#039;t even imagine what he went through emotionally. Thankfully Zara was there to help him through the really bad times when he&#039;d go there mentally. I loved the story and was totally pissed at her Mother for allowing all that crap to happen that put Zara in danger. And it really makes me happy that we get to find out how they are doing a few years down the road. Now I can&#039;t wait for the next story!!!

❤️ the book. Tornio and Zara romance started slow but when it started....fire. Can&#039;t wait for Luiz story. I didn&#039;t like it as much as the first book in this series but I liked it nonetheless.

Another awesomeness by Sam. Loved this book so much. It broke my heart and then healed it. I felt so much empathy for Tonio. The life he had growing up... Not only to be told that he&#039;s nothing but a trash but also father trying to break him... I can&#039;t even. Tonio deserved happiness. Glad he stuck gold with Zara. She&#039;s a perfect girl for him. She took him with his past demons and present lifestyle and all. She saw him. Zara saw what a gift truly he is. And being a smart girl, she grabbed him with both hands never letting go. This was a gold story. I so can&#039;t wait for the next one, especially after that bomb dropped at the end. I didn&#039;t saw that coming.

I adored Tonio and Zara! Their love was very sweet and I really loved both characters. It was so nice to read how Zara didn&#039;t push him away but instead embraced Tonio. Personally, I do not like reading a book where the heroine pushes the hero away for most of the book. Thankfully that was not the case here. I really enjoyed this book of the series and can&#039;t wait for the next one! It was also great to see all the characters from the first one again too!

Fantastic story. Happy Tonio and Zara found each other. And each boy found a place of safety and love. This new family was what they needed for there own sanity. Each man has lived through horrible torture, cruel unimaginable treatment, but somehow they came out learning to follow thier hearts. Loved this story, and can not wait for more