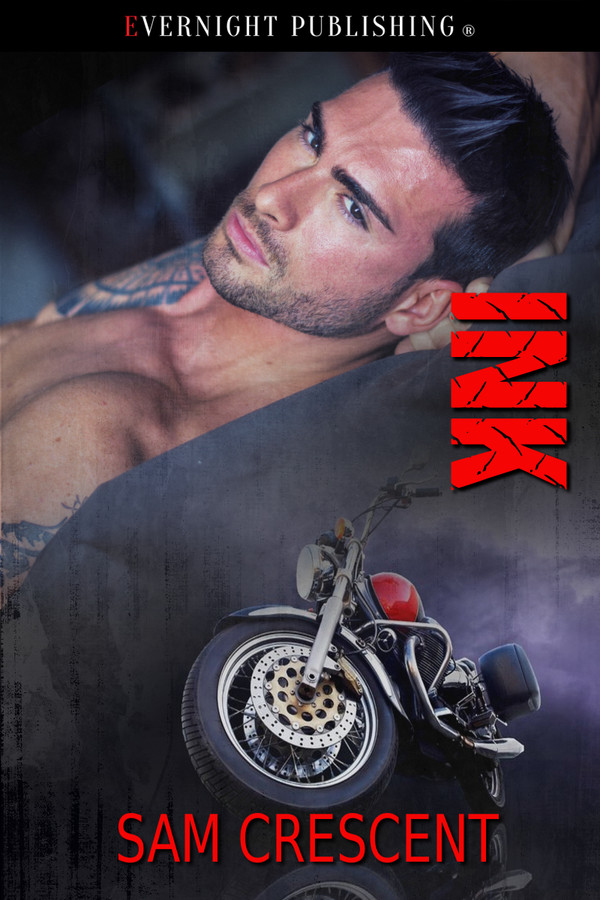 Ink knows Darcy has a “little girl” crush on him, and he finds it sweet and cute. However, when Darcy becomes sick, it brings back memories of a past he doesn’t want to remember. Put in an impossible position, he hands in his leather cut and leaves Fort Wills, never intending to look back.

For three years, Darcy has been filled with guilt. She knows she’s the one responsible for losing Ink. She never meant to force him away, but she did. So when Ink returns, she wants to put everything right.

Ink now has a fresh purpose in life. With the aid of her parents, Ink is going to help Darcy move forward, to live her life, to be independent. Ink wants to be her friend.

But jealousy isn’t something he expected to feel with Darcy. She’s younger than he is, and he shouldn’t fall for her, and yet, he can’t live without her.

For Darcy, having Ink to herself is a dream come true, but how long can it last? He left once. Will he leave her again? There’s no way she’d be able to live with that kind of heartache—should she even take that chance?

The guy she was with wasn’t someone he recognized. Whatever he’d said to Darcy had made her laugh though. Her head was thrown back, and she looked so incredibly happy. He stopped, watching her. She looked happy. She’d pinned her short locks up, and she wore a pair of jeans and a large shirt.

This Ward was making her laugh, and giving her happiness, and it bothered him. He’d never been like this with anyone else, so seeing her like this, happy, it was hard for him to go and interrupt.

He remembered how she’d try to make him laugh or talk to him. When she had a crush on him, she’d always tried to make him happy.

This Ward, he didn’t know who the guy was, but he wasn’t going to let Darcy get hurt.

He stepped around the building and walked with purpose toward them. Darcy saw him first, and the smile on her lips vanished. Now that hurt. He’d done nothing to hurt her in all the time he’d known her.

“Darcy, if I knew you needed to have lunch brought to you, I’d have dealt with it.” He was being a grade-A dick, but once he started, he couldn’t seem to stop.

“Is this a friend of yours?” Ward the prick asked.

“Yes. He’s friends with my mom and dad.”

He clenched his teeth together, hating that she’d made that distinction between them. She’d never once referred to him as her parents’ friend.

“Lunch is pretty much finished, and I think I should start heading back. It has been a pleasure, Darcy. We must do this again sometime.”

“You have my number.”

Now Ink wanted to destroy the bastard’s phone. Was he the only one that cared about her safety? Right now, it fucking felt like it, and it was pissing him off.

The picnic table was wrapped up, and he reached for Darcy.

“She’ll call you when she wants to see you again.”

Ward didn’t take a hint and leaned in, kissing her cheek.

Ink wanted to hurt that pretty face. To mark it up so the fucker knew never to touch her again.

Finally, Ward left, and he and Darcy were alone.

“What do you even know about that guy?”

“How did you know I was even here on a date?” she asked. She stared at him and laughed. “Wow, Tabitha. She was the one who encouraged me to go on this date, and yet she’s telling you all about it.”

“She should tell me, especially when you put your life in danger.”

“Danger? There was no danger. I didn’t go back to his place, nor did I go somewhere in his car. I had a picnic lunch with him close to where I work, surrounded by people. I’m not stupid, Ink. I know what I’m doing!” She yelled at him.

“You’re so determined to date. That guy could be a serial killer. You ever thought of that?”

She gasped. “So you’re saying the only kind of guy I could possibly get is the kind that goes around killing people. There is nothing wrong with wanting to date. It’s a perfectly logical thing to want to do. I don’t want to be alone and miserable for the rest of my life.”

“Yes!” She yelled, getting into his face. “I want to experience everything. Do you want me to spell it out for you, Ink? I want everything. I want sex. I want to be desired, needed, craved, loved. You name it, I want it all, and it has to start with dating. With finding a guy who is not afraid of the club or my family.” She shoved him hard. “Now leave me alone.”

I loved Ink&#039;s story from start to finish. I could not put it down. Im happy for Ink and Darcy!

Absolutely loved this addition to the The Skills series! I&#039;ve read of of this series and loved every last one of them! Hope there are still more to come! Thank you for a wonderful series!❤❤

I am such a big fan of Sam Crescent and her Skulls series is one of my favorites! Ink and Darcy just continue the amazing couples of this series. Great story!

Ohhhh! I loved Ink &amp; Darcy!!! Broke my heart when he left &amp; why, but it was such a wonderful journey back. So glad Sam Crescent wrote Ink &amp; Darcy’s story... it was fabulous!!

So happy for this couple. Love comes around when you least suspect it. Happy we are getting into the children now. With Ink and Dracy adoption could be a start in a whole new generation.

I could not wait to read this book. I love this series and this book pulled me in like all the rest. I fell for Ink from the beginning. The chemistry was good but for me it was the story it was so many emotions throughout the book I could not put down.

Definitely worth the read! This story really got me in my feelings. My heart hurt for Darcy and also ink. Her being sick bought back a lot hurtful memories for ink. I was so glad to see her overcome her sickness, some people don’t. I fell in love with ink and Darcy. They truly are meant for each other. Omg, I love Tabitha. I love how she was there for her friend. Plus I can’t wait to see where her story takes her!

OMG it&#039;s a new Skulls book!!! 4.5 Stars. I was so happy and shocked to finally see another Skulls book from Sam. She spoils us so much with the amount of books she writes. Ink and Darcy, the beginning of the kids of the original Skulls stories. This book had me from the very beginning. So emotional, sad and confronting in the beginning that it felt like a real life story. You also get so much of the characters I love from the Skulls series and the Chaos Bleeds series I am so looking forward to Tabitha&#039;s book