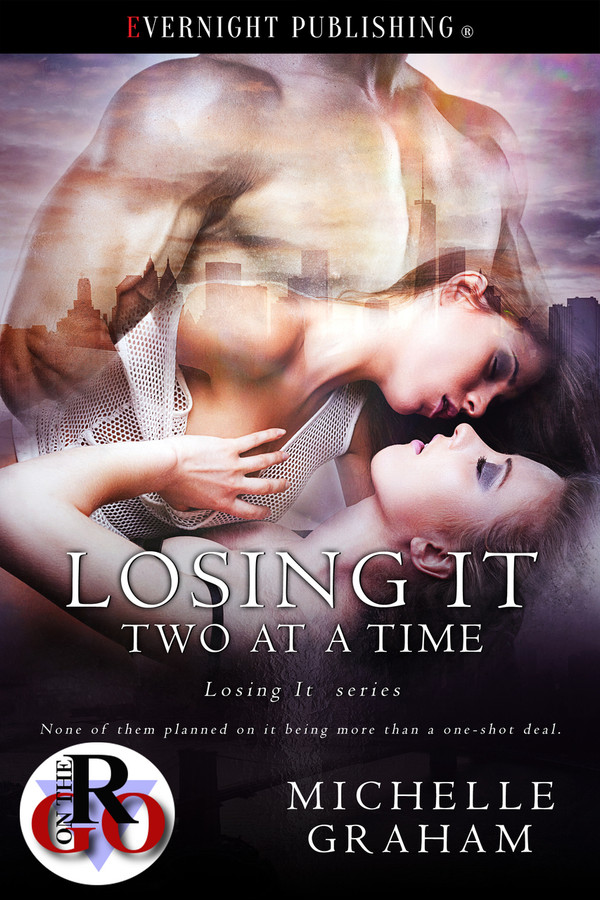 Alexa and Vivian Parker have been together since high school. Neither one has ever been with a man, nor have they feel the need. Until they want a baby and can only get one the old-fashioned way. So they turn to hook-up site, Losing It, to find a sperm donor.

Carter Michaels didn’t anticipate having two virgins to please, but he’s more than up for the task, and he’ll help them as often as needed.

None of them planned on it being more than a one-shot deal.

Though he tried to maintain eye contact, Carter couldn’t help darting his gaze down to the women’s chests. He cleared his throat and looked down at the floor.

“You were expecting some young virgin, I know,” Vivian said. “Sorry for not being upfront, but we hoped we could persuade you to take both of our virginities.”

Confused, Carter scrunched up his forehead, but Vivian continued before he could say anything.

“Among other things,” Alexa said. The two women shared a knowing look. The love and intimacy between them was obvious, and Carter couldn’t figure out why they suddenly felt the need for a man.

“Anyway,” Vivian said, “neither of us has ever had sex with a man, so we’re hetero virgins.”

“This seems like a fun opportunity,” Carter said. “But I have to ask. Why now? You two obviously have a good relationship.”

The women glanced at each other and Alexa spoke up. “We’re bisexual, and we’d both had boyfriends before we started dating each other, but we’d never had sex with one of them. We were so content with each other that it didn’t matter. What’s really motivating us? Well, um, practical concerns.”

“We want to have a baby. Adopting takes forever, and usually costs a fortune. Fertility treatments like artificial insemination and IVF are also really expensive. But we can still do it the old-fashioned way.”

Carter dropped into a nearby chair. “Wow.” They wanted him to father a child? That explained the need for getting tested. They didn’t plan on using protection. “I’m not sure what to say.”

“I know it’s kind of a big deal,” said Vivian. “Rest assured, we don’t expect you to be anything more than a sperm donor. We’ve got legal documents stating we do not expect you to pay child support, or have any role in parenting. We’d require you to sign papers saying you’ll relinquish all parental rights.”

Alexa pointed to several papers spread out on the desk. “The documents are there along with our STD test results. Take a look and think it over. If you’re willing to help, we can get to … work.” Carter peered at the papers in front of him, trying to decide what to do.

“Even if you aren’t sure about fathering a kid, we’d hate to waste your time.” Vivian pointed to a basket on the night stand. “There are condoms in there, so we can have sex anyway.”

Vivian laughed, a sultry, sexy sound that had Carter’s dick straining in his jeans. “We’ll just get started while you think it over.”

His cock made the decision for him. There was no chance he’d pass up this opportunity.

Carter’s t-shirt hit the floor first. Then he kicked off his shoes and stripped off his jeans, boxers, and socks. Once naked, he sauntered to the tub and climbed in.

The women broke apart, and Alexa giggled at the sight of his erection. “Looks like you’ve made up your mind.”

Vivian reached for his cock. “Nice equipment.” Carter groaned when she cupped his balls and gave them a gentle squeeze. “So are you willing to knock us up, or do we need to get the condoms?”

Dinner for Two by Eileen Griffin

Losing It in Vegas by Michelle Graham

Losing It All Over Again by Michelle Graham

Losing It in the Closet by Michelle Graham

Bound to Two by Winter Sloane