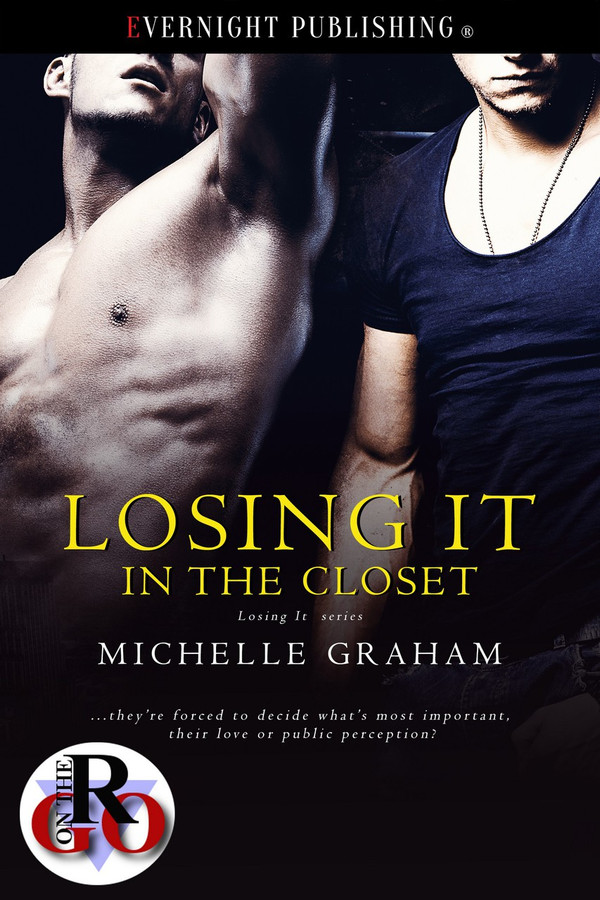 Zach Hughes isn’t homosexual. He’s got a string of sexual conquests to prove it. The problem is he’s still attracted to men. He finally decides that the only way to get it out of his system is by having sex with a man, just once, and then he can move on. He turns to online hook-up site Losing It to find him a discreet gentleman to help him out.

A teacher at a Catholic school, Colin Montgomery has to be careful to hide his sexual orientation. Random meet-ups far from home are the only way he gets a date. And of course a relationship is out of the question.

From the moment Colin and Zach meet, sparks fly, and the two find they can’t get enough of each other, agreeing to meet again and again. But when they’re spotted out together by one of Colin’s students, their lives are turned upside down, and they’re forced to decide what’s most important—their love or public perception?

Colin eyed the young man across from him over the top of his beer glass. He knew from small talk that Zach was twenty-two, from Nashville, nearly finished his degree in history, and planning to pursue a career as a teacher. All lovely information, but Colin’s curiosity ran deeper. Zach was good looking. His blonde hair fell across his forehead in a fashionable shag but didn’t hide his sparkling blue eyes. He had a smile that would cause anyone’s heart to flutter as Colin’s had when Zach first greeted him. But Colin didn’t believe for a second that Zach was a virgin.

Once the waiter had delivered their food and Colin knew they wouldn’t be interrupted, he decided to broach some of the more probing questions he had. “I find it hard to believe that someone as good looking as you hasn’t had sex yet.”

Zach stilled for a moment as a blush spread across his cheeks, and then he swallowed his food and took a drink. “I’ve only had sex with girls.”

Aha. “I see.” Colin took a bite of food and chewed it slowly. “So your attraction to men, is it a new thing or have you always felt that way?”

Shifting in his chair, Zach took another swig of beer. “I guess I’m curious.”

“I’m gay,” Colin replied. What a nice change to be able to admit that to someone. He was used to hiding. “Like you, I’ve been with women, but it was out of a sense of obligation rather than attraction.”

“So how did your family react when you told them?”

Having a conversation over dinner was nice because chewing on his food gave Colin the chance to think of how to answer the question. “They don’t know,” he said finally. “I’m Catholic, and a teacher, so it wouldn’t go over well. That’s why I travel for dates.”

Zach nodded and they continued eating in silence. Colin took the opportunity to study the younger man. His lean frame seemed to have a minimum of extra padding, and he moved with grace. Colin wondered what he’d look like naked, and his dick began to stiffen at the imagery. Because he had to take so many precautions when he arranged a date, he didn’t do it very often, and the long dry spells meant he got excited easily. He shifted in his chair as he grew harder.

They talked a little more as they ate, but Colin had difficulty focusing on anything other than the discomfort in his pants. With a grimace, he tried reciting the times table in his head to encourage his erection to disappear for now.

“Are you okay?” Zach asked, a look of uncertainty on his gorgeous face.

Colin smiled. The only thing that would help would be getting this guy to bed as soon as possible. He leaned forward. “My cock is so hard from thinking about you naked that it’s uncomfortable to sit here.”

Zach’s eyes widened and his face flushed a deep red. Colin watched the other man’s Adam’s apple bob as he swallowed, imagining what that throat would feel like on his cock. Setting down his utensils, Colin wiped his mouth with the napkin. “Can we get out of here?”

Even though this is a short story, it didn&#039;t seem like it! I loved the idea that you should be true to yourself. It was angst free and it had a HEA.

Losing It in Vegas by Michelle Graham

Losing It All Over Again by Michelle Graham

A Perfect Beginning by Casper Graham

Losing It Two at a Time by Michelle Graham