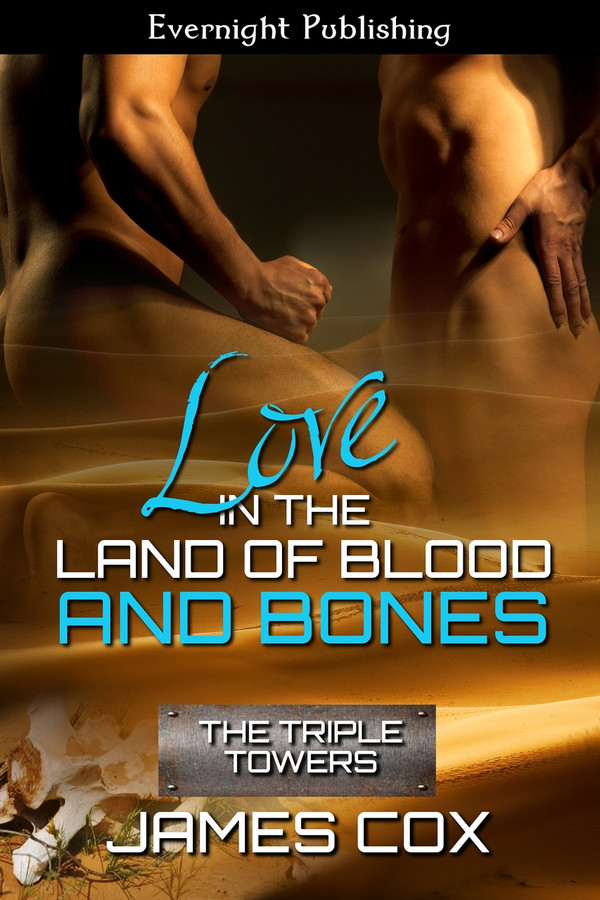 They are no longer heroes...

The survivors of the Great End were on the brink of death. Three towers were built with the last of the government’s money and power. The wealthiest survivors were given residence within the Triple Towers. A wall of steel was constructed to surround them.

Lorn is now exiled over that wall and his lover Kallen courageously follows. Kallen knows the dangers and violence that awaits them. He managed to survive a terrifying childhood in the wastrel camps. It’s not just the sand that threatens their love—old enemies, former lovers and the traitor from the triple towers returns.

Can they find love in the land of blood and bones?

“This is a private game.” Lorn’s chest rumbled with his words.

“Just wanting to watch, my friend.” Rohan held out the bottle. “I have not had Kallen’s cock in my mouth for a long time.” Rohan took a swig and licked his lips.

Kallen wanted to scream. What did it matter if Rohan watched? Kallen was rather keen on the idea but if his lover, the holder of his heart said no, well then that would be fine too. “Come on, big boy.” Kallen pulled open his Velcro pants, so the nest of blond hair was showing. He tugged down so that just the base of his cock was visible to both men.

“You want this. Him?” Lorn grabbed the bottle and took a healthy gulp.

“Us.” Kallen wanted three. His cock was raging in his pants. “If you want,” he added not wanting to alienate Lorn.

Lorn grumbled something and then handed the bottle to Rohan. “You do not get to penetrate him. Kallen’s butt is mine.”

“Deal.” Rohan was quick to agree. He took another drink and then dropped the bottle in the sand. It landed with a plop but didn’t tip over.

Rohan pulled his shirt off. The redheaded man had gained some weight since Kallen had last seen him. He wasn’t all skin and bones. Rohan actually had some meat on him and a few lean muscles on his frame. Then he wiggled out of his pants, and they dropped to the floor.

Kallen didn’t stare at Rohan’s penis. Instead, his eyes went to Lorn who glanced at the man with an appreciative grin. Good, seems like this would be a fine time. Kallen glanced at Rohan’s cock as he shifted and undressed. Rohan was uncut like him. The foreskin pulled away from the blushed head of his dick. It was curved slightly to the right. The skin was a bit lighter than the rest of his body. Apparently working outside naked wasn’t on Rohan’s list of duties in the camp. His erection looked luscious.

They now watched him, so Kallen put on a show. He grabbed his cock and pumped it. Pleasure seeped through his body. He tucked his clothes behind his head, propping it up so he could watch Lorn remove the rest of his attire. “He’s fucking gorgeous,” Kallen said.

Lorn seemed to blush a bit, losing his pants and revealing his thick erection.

I&#039;m so happy with this book. It&#039;s the sequel to &quot;Heart of a Hero&quot;, which I also loved. This one picks up pretty much where the first left off. Lorn has been exiled from the towers for ten years. Kallen elects to leave paradise to be with his man. He&#039;s been out there, and he can help Lorn. He can also love him for all he&#039;s worth. This is an action packed story. There is a LOT going on out there beyond the wall, and Lorn can&#039;t believe it. He&#039;s lived in the comfort of the towers all his life, and he had no idea about the way the &quot;Wastrels&quot; lived. That&#039;s all the story I&#039;m going to give away. You should read it to get the full effect. I&#039;m just going to leave you with saying that it&#039;s fantastic. What I WILL tell you is that &quot;Love in the Land of Blood and Bones&quot; is also an emotional love story. Lorn and Kallen are meant for each other, and although the sex is beyond hot, it&#039;s the romance that pulled me in. The way they speak together, and the way they look at each other is very sweet. Lots of people don&#039;t think of MM romance stories to be romantic. This is not the case. These men have fallen hard for each other, and it&#039;s obvious. I&#039;m giving this one five very solid stars! James Cox has written a book (and series) that is a full on force to be reckoned with.

The sequel starts right away after the first book. What&#039;s great and you don&#039;t miss a thing. Lorn has been exiled for ten years, after all what he&#039;s done for the Three Towers and the people there he is shocked and angry. But he isn&#039;t alone, his new Lover and friend, Kallen, left with him. Both have to struggle now with life in the sand. On their way to find Kallen&#039;s old camp they met Kallen&#039;s former lover and friend, Rohan. Lorn doesn&#039;t like the idea of some ex so close to his man. Is there need to be jealousy, doesn&#039;t Kallen proof his feelings for his &quot;big Boy&quot; by leaving the heaven on earth to stay by Lorn&#039;s side? And what are Rohan&#039;s plans? But then some unexpected happens and the whole population of the Three Towers and the camps around it are in danger! Can Lorn, the Heroe with a heart of Gold, and Kallen save them all? The end nearly shocked me and left me more than excited and longing for the third book in this series. James, you really are an amazing author with creating these awesome and nearly realistic worlds and those damn hot and sexy as hell character of men!! And don&#039;t forget the steaming scenes!! Delicious! I am really curious about the final book now!

In many ways, these are the stories of two interesting &quot;heroes&quot;. Kallen does not seek to be a hero, but keeps finding himself in situations where he can become one, or at least as much of one as can be found in such a disastrous time and place. Lorn truly has a heart to be a hero, but without Kallen would have died as soon as the exile began. Together they are definitely stronger than either one is separately. The twists in their situation continue and the setup for the final book in the trilogy is an exciting one. Even the sex in this story seems to draw the two closer (even when sharing their bed) and builds their relationship&#039;s strength. Those that enjoyed the first book in this series should certainly continue to read Kallen and Lorn&#039;s story.

“As the world evolved, so did humanity’s stupidity. Greed and pollution destroyed the old world. Rain stopped falling, and plants died until all that remained was endless piles of fucking sand. With the last of America’s money and power, they built the three towers. Huge, beautiful structures with amenities that could change humanity’s future. However, they hoarded it behind a huge thick wall and let the rest of the world suffer.” Thus begins the adventure of Kallen and Lorn, his lover. Kallen was born what is called in the book a wastrel. He was born on the outside of the wall, and through a series of lies and deceptions, worked his way inside the wall. Lorn was exiled from his home within the walls, and Kallen chose to leave with him because “you’re fucking amazing in bed.” With his knowledge of the dunes and the outside people, Kallen decides that he and Lorn can survive the ten years of exile using their combined strength and guile. Together they make their way toward Kallen’s home camp. But it is a treacherous way, and they have to fight to survive some of the other people attempting to survive the dunes. During the journey, they meet Rohan, a friend from his home camp. They soon go from a pair to a threesome. An explosion in the Triple Towers turns their plans back toward there, and they hurry back to help any survivors that may need it. And with their luck, they saved Donton, a friend of Kallen’s, and the new president of the Triple Towers. Things change for them when their exile was revoked if they helped find Rachella, which is the major basis of the story. There is great humor, wonderful sex scenes, violence, fear and a whole lot of love between the main characters. It is a great futuristic “what if” book, and reads quickly and smoothly. Mr. Cox has quite the imagination, and I look forward to going back to read his first in this series, especially if it is a fun as Love in the Land of Blood and Bones: Triple Towers. And just so you know, this is a stand-alone. I have not read book one, but had no problem reading this one.

James Cox is a breath of fresh air in the sci-fi romance market and I make no excuse for thinking he is an amazing author - he just is! I am no great fan of sci-fi - it&#039;s too technical and hard for non-nerdy types like me - but this author makes it accessible for all lovers of romance. He writes in an easy fluid style that engages the reader from the start, his &quot;futuristic&quot; references (whether it be some new gadget or weaponry) are easy to understand and visualize, therefore making the reading so much more enjoyable.

The Last Cowboy by James Cox