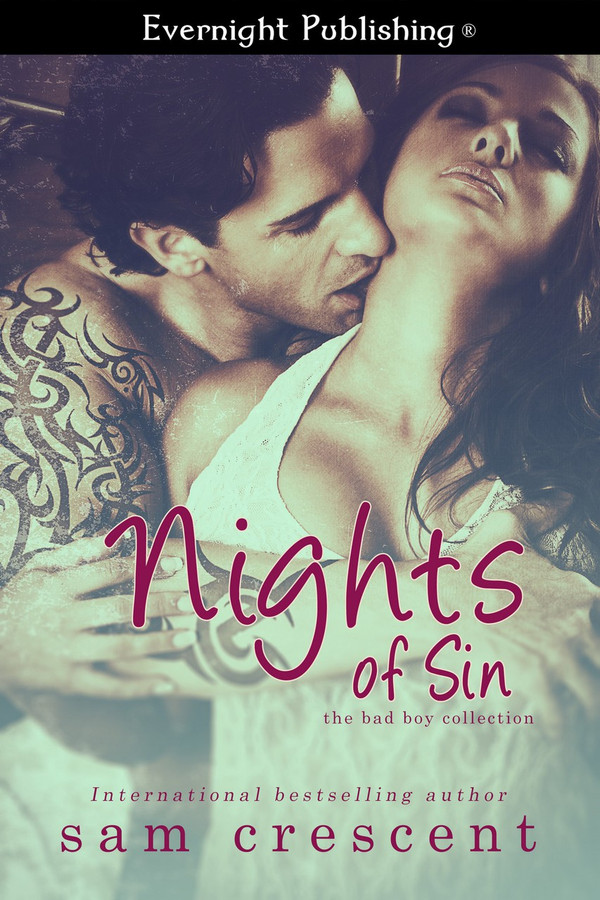 Alexa is a plus-size librarian who has never lived a life of passion or adventure. When she's her best friend’s plus-one at a party, she never imagined she’d be in a sex club that offers every wicked desire she has ever had. There, she discovers Corey, a man who holds her attention like no one else.

Corey’s the love and leave them type of guy, used to women falling at his feet. No woman holds his interest for longer than a few fucks. When Alexa shows no signs of coming to him, he has no choice but to chase her. He will break all the rules for a chance to get between her thighs.

What could possibly be wrong with one night of sin? However, Corey’s not sated with one night, nor is he happy with two. Alexa has gotten under his skin, and he can’t get rid of her.

Corey can’t let her go, but when he finds out Alexa’s keeping her darkest secrets from him, he knows he has to do something to show her he’ll be everything to her. Can Alexa open up about her deepest desires?

“The club is supposed to stay at the club.”
“Are you afraid of getting a little dirty, Alexa?” he asked.
Gritting her teeth, she tried to find something witty to say, but nothing was forthcoming.
“You want to play, and fuck at the club, then be there tonight. Do as I instruct, and we’ll see what happens.” His teeth grazed her neck, and she bit into her lip to stop herself from crying out. “Tonight, you will come to the club, and you don’t go wandering off with Nathan.”
“What makes you think I’ll come?” she asked.
She felt his lips rise up in a smile. The hand on her stomach moved down to cup her between her thighs, and she tried to move away from him, which only nestled her ass against his cock. He was rock hard, and he groaned. “No matter how you fight me, I’m not going to give you a chance to deny what you want. You’ll come tonight without panties, and I’ll have you screaming my name as you come in my mouth, over my fingers. You’ll love every single second of what I do to you.” He moved his hand, sliding it down her jeans to actually touch her pussy. “This is what makes me believe that you’re going to come tonight. You’re already soaking wet, and I bet your pussy is begging for some hard cock.”
This man was just beyond any words that she could think of. He was so sure of himself, and why shouldn’t he be? She was soaking wet. She wanted to have sex with him, and tonight she’d be there just to see what happened.
He teased his fingers through her slit, going down to plunge inside her.
“So, tell me what a little librarian is doing at a sex club?”
“None of your business.”
Corey chuckled. “Okay, I’ll get an answer out of you soon enough.” He bit her neck, and she whimpered, trying to keep her noises to a minimum. “Tonight, you’re not going to be able to stay quiet. I’m going to have you screaming. Your voice is going to be so hoarse with all the screaming you’re going to be doing.”
Two fingers stroked over her clit, and he didn’t stop. His other hand unbuttoned her jeans, and he moved them until they were at her knees.
“You’ve got to stop.”
“Is that an order or a suggestion?” he asked.
She didn’t know what it was.
His hand slid into her panties, and he started to stroke her clit. She heard how wet she was as he teased her. He moved his fingers down to her entrance, and pushed two fingers up inside her. “See, you’re so wet, and ready for a nice hard cock. I bet it’s all you think about at times, right? You want a nice big cock fucking this tight pussy. How long has it been since you’ve been with someone? You’re so tight. I’m not a small man, baby. You’re going to have to get used to my dick.”

Alexa Evans is tired of living a life that is passionless and boring. When her best friend invites her to be her plus one at a party, never in her wildest imagination could she fathom finding herself in a sex club, much less one that offers anything her heart desires if she is brave enough to take that first step. Corey Weaver is used to having women fall at his feet. He is your typical playboy. No woman holds his interest longer than a night or two. He is mystified by the beautiful Alexa who watches him night after night on stage without coming to him. Left with no choice, Corey is forced to do the chasing, with Alexa as his prey and nothing is going to stand in his way. But what happens when one night of sin isn’t enough to satisfy Corey’s desires? Can he prove to Alexa that he is the man to fulfill all of her deepest and darkest desires before she walks away? I have to say, author Sam Crescent rocks the pages when it comes to those delicious sexy bad boys. Story after story, I am totally addicted and captivated by the strong heroines, sexy heroes and the passion and romance they create that is always risqué, arousing, commanding and freaking hot. In Nights of Sin, the author creates the perfect dark fantasy with plenty of angst, tension and sexual pleasure making darn easy for the reader to be able to escape within the pages. It’s almost as if the hero is taking charge and challenging not only the heroine but the reader as well, daring them to unlock their own desires. It’s seemed really easy to understand and relate to the realistically portrayed Alexa. She struggles fitting in, she is realistic about her body image but doesn’t stress about it and even though she yearns for excitement and the chance to change her life she hesitates to take the first step. But Alexa isn’t a push over, she might not exactly be comfortable with herself but she isn’t afraid to stand up and fight. Alexa is fine going to the sex club night after night. Watching Corey fascinates her, but never could she image his hands on her body commanding her and fulfilling all over her deepest darkest desires. For four weeks, Corey has watched Alexa watch him. He’s intrigued not only by the look in her eyes but by the way she holds herself reserved, challenging him to break down her walls and release her sexual desires. For Corey, nothing matters except pleasure when he is with a woman. He holds his emotions back, satisfying the woman and himself without any real feelings. Watching Corey pursue Alexa after their one night of sex, chasing and challenging her time and time again, is like a roller-coaster ride of pleasure that keeps you turning the page. In part due to the fact that it seems totally out of character for the bad boy, Corey goes to great lengths in order to capture Alexa’s heart. Watching Corey’s and Alex’s characters change, as they strive to discover their inner strengths, needs and dreams in their journey from lust to love, is engaging and seductive. Nights of Sin is a fast paced read that you sure aren’t going to want to miss.

Alexa Evans unlocks a hidden side of her personality in NIGHTS OF SIN by Sam Crescent. As the first installment in The Bad Boy Collection, this comes in a bite-size novella, just enough to provide a quick, yet satisfying read. Since a sex club provides the setting, there&#039;s plenty of entertainment. I liked the dynamic between Alexa and Corey because it&#039;s not what I had expected. As a newbie to the scene, Alexa throws the brakes on Corey&#039;s expert routine. As a result, the bulk of the story focuses on new experiences. Packed with all of the signature Sam Crescent spice, I found this to be a fresh approach to the BDSM lifestyle. Alexa&#039;s determination to follow a slow path is entertaining when matched with Corey&#039;s passion. I think this series holds a lot of promise, which makes me look forward to the next installment. - See more at: http://erotic.theromancereviews.com/viewbooksreview.php?bookid=21854#sthash.qXdslRQc.dpuf

I really enjoyed reading about how Alexa visits the &quot;club&quot; and has been eyeing Corey. She fantasizes about him. She thinks she will never get him, only to find out that he has eyeing her too. Sam Crescent drew me in with the exchange between the two. It was too good. This was my first Sam Crescent story and it won&#039;t be the last.

Even without actually participating, Alexa Evans thoroughly enjoys watching the ultimate bad boy in action. Women, like everything else in Corey Weaver’s life, come easily and bore him quickly, except one. And nothing about her is boring. Knowing that her privacy has been breached infuriates Alexa, although there is a little thrill that Corey sought her out. Taking a chance on him is just asking to be hurt, yet his persistence is wearing her down. Corey is not about to take no for an answer. Alexa is the first woman to make him want to beg, and if that is what it takes, he will do it. On the outside Alexa is the quintessential librarian, on the inside is a woman longing to find burning passion. What I like most is that she is a real woman, not a girl barely out of puberty who acts like she has seen it all. Corey dials in to that sexual being trying to break free, and what he finds takes his breath away. Alexa does not need a man to complete her, but with Corey, you are going to love watching her fight a losing battle. - See more at: http://www.coffeetimeromance.com/BookReviews/nightsofsinbook3bysamcrescent.html#.VyXxNMKZ-pp

I love Corey and Alexa! Yeah, he was a bad boy but she still loved him! He of course noticed her but it was nice to see him have to make the move to get her instead of the other way around. I love Sam&#039;s books and this one was smoking hot.

This book was so entertaining and we&#039;ll written. Alexa has had the hot for weeks fantasizing about him in very dirty ways. Cory has also secretly wanted Alexa. Let the fun begin! Read it in one sitting great dialogue, some steamy sex have to say I really enjoyed this book.

ARC received from a very generous Author :-) What I enjoyed most about this book was the fact that Alexa didn&#039;t just fall in love with Corey immediately (insta-love) she really made him work for it Alexa saw Corey at a &#039;sex club&#039; which she has been going to for the last month or so and she saw all his flaws. She never thought that he would look at her twice as she was a plus size women. Unbeknown to her Corey was watching her too and waiting for her to make her move as that&#039;s what all the women did, they approached him. Until he couldn&#039;t wait anymore and he started chasing Alexa. I loved that Alexa even though she wasn&#039;t that comfortable with herself, she knew what she wanted and she stood up for herself and she didn&#039;t just let him take over her life. So all she wanted was one night with Corey. This story was a slow build of a relationship between two people who in the beginning didn&#039;t know what they wanted but they figured it out together This is a story of fantasies and about trusting that one person with your deepest darkest fantasy. Thank you Sam for taking me on this journey. Just what I needed after a hard day&#039;s work

His Secret Sin by Sam Crescent