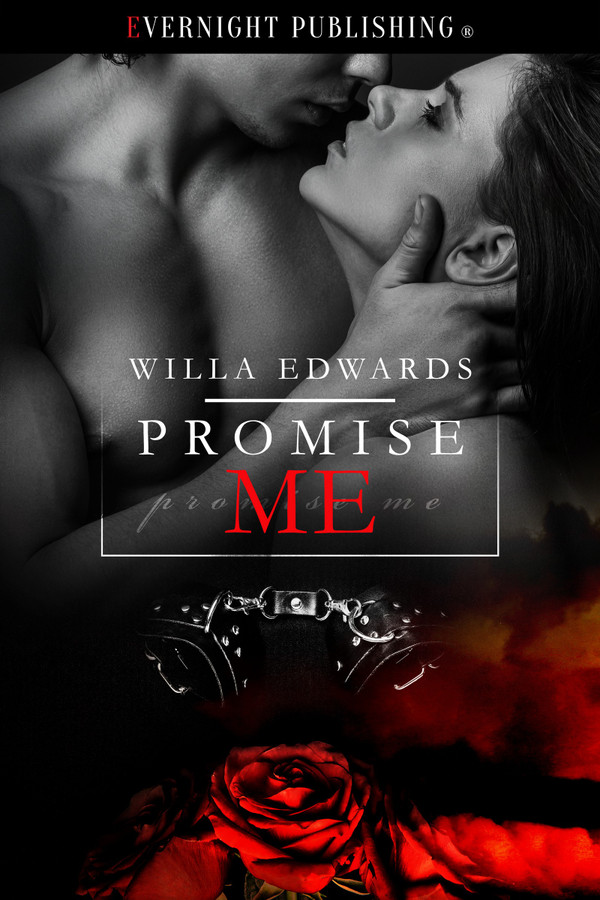 A year ago, Cal asked Lindsay for the one thing he’d always wanted but never requested of another woman: to dominate her. Lindsay ran, leaving him without a word.

When he comes home to find her on his front porch, begging for a second chance, he’s torn. Her pleas sound pretty, but his pride won’t let him just accept her return. She needs to prove herself.

Lindsay has spent the last year missing Cal and wishing she could take back the night she fled. All she wants is to be with him. If that means being tied up and spanked, she’s more than willing to agree. But when he asks for the one promise she must refuse, she risks destroying everything they’ve built together.

Can Cal accept Lindsay’s limitations? Or will her denial be too much for him to bear?

“You’re willing to be my submissive. To do everything I demand. Without question. Without argument. No matter what I ask for.”

Sweat gathered at the backs of her knees. Just as last time he’d made the request, her whole body jolted with equal amounts of interest and fear. She licked her dry lips, swallowing twice before she forced the solitary word from her lips. “Yes.”

Before Cal had suggested submission and domination, she’d never considered such a relationship. Sure, she’d heard of it. Who hadn’t snuck at least a peek at Fifty Shades of Grey? But it was something other people did. Kinky people. People who filled their basements with odd contraptions and spent weekends at sex clubs. Certainly not anything she’d be interested in. And Cal hadn’t given any indication that was something he wanted either. Until that night.

When Cal had asked her to submit to him, she hadn’t known what to do besides say yes. She wasn’t a prude, and the thought of a little spanking and some handcuffs hadn’t sounded like a high price to pay to spice up their bedroom. In fact, it was exciting, thrilling to explore this new territory with someone she loved so much.

It turned out to be a very high price. Higher than she’d been willing to pay. A whole year without him. Not that she could blame Cal for that. It was all her fault. Hers and her stupid fear.

His lips pursed slightly, his eyes suspicious but filled with a devilish light. It was that devil she feared. She could handle his disbelief. It would take time for him to trust her. But his demon wasn’t as easy to pacify, if there was any way at all.

“Take your clothes off.”

It was a test. One she had to pass. Yet she couldn’t stop her eyes from glancing out across the open yard to the road beyond. Cal didn’t live on a busy street or in a crowded neighborhood. The nature of his repair work required space, for his workshop and his noisy equipment. But regardless of how remote his home was, he wasn’t the Unabomber. He didn’t live alone in the wilderness.

The town road lay a few hundred yards from where they stood, the view blocked by only a few young oak trees. It was hardly the kind of privacy she was accustomed to when taking off her clothes.

“If you don’t want to do this, Lindsay, you can leave right now.”

But she wouldn’t prove him right this time. Not again.

Her hands grabbed the edge of her shirt and pulled the fabric over her head. She dropped the army green tank to the ground. Her fingers fumbled with the zipper of her jeans, yanking it down. The denim loosened around her hips. With a shimmy and a shake, she shoved the shorts off her legs, and kicked them aside.

“Keep going,” he encouraged, his eyes never leaving her body. The flame of lust barely overpowered the lick of anger in his gaze.

Twisting her hands behind her back, her fingers unclasped her bra. She shifted the straps down her arms before dropping it to the ground in a pile of white lace. Her nipples beaded in the cool air. Or maybe it was the indecent exposure.

Cal shifted his stance, stretching his legs a little wider. A telltale bulge tented the front of his pants. His dark eyes stared at her like he wanted to eat her alive. Or more likely he envisioned her tied to his bed, and just the idea had her pussy aching. She couldn’t remember being this hot in a long time. Definitely not in the last year. Not since the last time she’d been beneath Cal.

“Lindsay.” His deep, rusty voice sent another stab of pure lust rushing through her body, urging her to move faster. Which was his intent. She could hear it as clear as a command in the sound of her name on his lips.

She kicked off her sandals, the gold heels shining in the sun as they sailed away, leaving her flat footed. The change in height shifted the balance of power between them even further. Something about his six foot plus build towering over her tugged at the inherent vulnerability in her. The part of her that knew if he wanted to take her, she might not be able to stop him. And even though he never would, the knowledge that he could, had her body quaking.

She gripped the lacy edge of her panties, shoving the damp cloth down her legs. The motion forced her to bend over and offer Cal a juicier look at her breasts.

Not that it mattered. He could see everything already. With every inch of skin exposed, each brush of the wind against her body had her flaming. A part of her was horrified she was turned on by standing naked on his porch. But the rest of her just felt titillated. Free in a way she’d never been before.

Now all she wanted was to see Cal just as bare. To feel his smooth skin against hers, his body pressing her down, taking her in that fierce, desperate way she’d dreamed about for a year.

His nostrils flared, his jaw hard as iron. As he swallowed, his Adam’s apple bobbed, and her mouth watered, wanting to move forward and nip at that spot, to lick and suck on his skin until he moaned beneath her.

But she didn’t move. He hadn’t given her permission yet. If she wanted to convince him she could handle his needs, she had to obey.

She had a lot to prove, and she refused to ruin her chances so soon. Compared to stripping on his porch where the whole world could see, staying still was easy. At least easier. Stopping herself from touching Cal wasn’t as effortless.

The surprise radiated through his voice filled her with pride. He’d underestimated her if he thought she’d balk so quickly. She’d spent a year thinking about him. Dreaming about being beneath him again, wishing things could be different. He wasn’t close to pushing her beyond her limits when it came to how much she wanted to show him she’d changed.

I read this in one sitting and loved every minute! Excellent, concise story. HOT!!!

Crazy hot like you’d expect, but this dom and sub couple have a strong emotional connection too. Cal and Lindsay had had a physical relationship a year before, but when he revealed his true desires, she’d been intrigued, but uncertain too. With a job opportunity giving her a good excuse to leave, she did. But during her year out of the country, she couldn’t forget Cal, the things he’d demanded of her, and her desire to explore the new boundaries. When she returns unexpectedly, he tests her resolve to explore their new roles with an explosive night of passion. There are a few hiccups before these two these two agree on their terms.