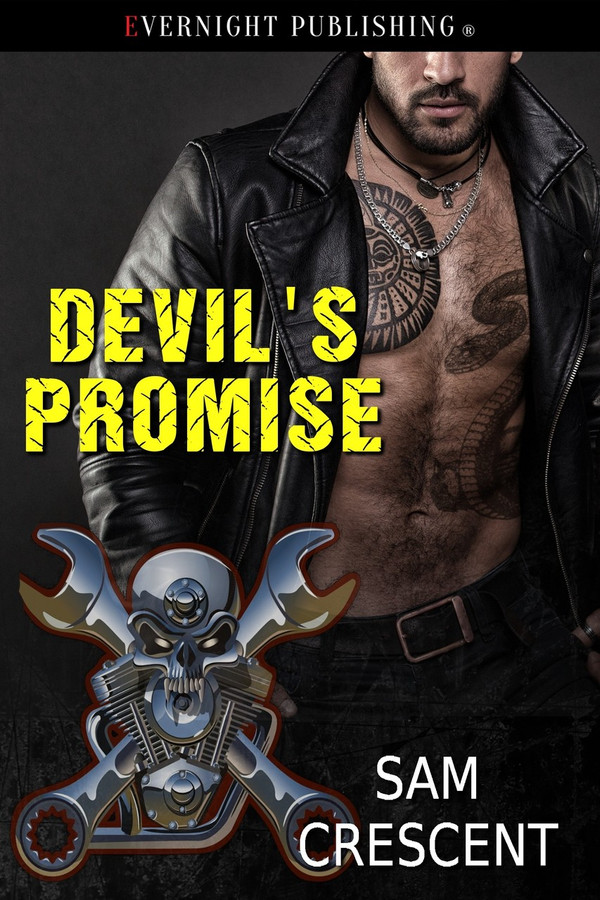 After forgetting his anniversary, Devil knows he has got to do something serious to make it up to Lexie. She puts up with all of his shit and everything with the club, he doesn’t want her to ever doubt his love for her. Using his new-found friendship with the Billionaires to call in a favor, he knows this will be an anniversary she’ll never forget.

For the longest time, Lexie has had to deal with one threat after another, knowing Devil will always be by her side. During that time, she’s gotten older and with it, insecurities have started to build.

Can Devil wipe away all her worries? Will this be an anniversary of a lifetime? Two lovers forever, or are they?

This is a quick short story of a man devoted to his woman and willing to do anything to make it up to her. He knows she’ll do anything for him and their kids. It’s his turn to show her that she means the world to him.

**Tabitha and Simon teaser included to whet your appetite for their story.

With her hands locked above her head, there was no way of escaping. Lexie should have known that Devil would see and know something was up. He held her wrists together in one of his and then ran his other hand down her body. He started at her shoulder then down to cup her tit.

He circled the hardened bud with the tip of a finger.

“There’s my girl. Sexy, hot, and wanting me. Now I don’t know what has gotten into you of late. You won’t change in front of me, nor will you let me fuck you with the light on. You think I don’t notice these things, but I do. Believe me, I fucking do, and it’s tearing me apart to see you like this.” He traced a finger across the valley between her tits, circling her other nipple.

She was so sensitive that an answering wave of pleasure rushed over her. Her clit started to pulse, and she wanted him so much.

Devil always knew what to do to make her body come alive and to make her want him. Not that it was hard to do, she always wanted him. He stopped teasing her nipples to cup her tits. Suddenly he stopped and held both of her hands and wrapped them around his neck so that she was holding onto him.

“You do not let go. If you do and try and stop me, I won’t let you come for the entire night, do you understand?”

He kissed her neck, sucking on her pulse. Closing her eyes, she let herself go.

“Now,” he said, putting his hands on her hips. “Let’s start at the beginning. Ah, yes, Lexie, you’re my wife. The mother of all of my children. The very reason I fucking breathe at times. Why are you hiding yourself from me?”

Sam Crescent revisits some familiar friends and family in this quick MC romance. Lexie is a woman busy with life. Raising her kids and taking care of her friends and the club have filled her years and suddenly she’s doubting if she’s attractive enough to keep her man’s attention. It was so easy to connect with Lexie over this. As the years pass gravity kicks in and we see wrinkles that we’ve never noticed before and I completely get her insecurities. Seeing Devil so frustrated with himself for forgetting what she considers their anniversary just melted my heart. Witnessing his upset at her doubt in him was absolutely wrenching but watching him prove to her his attraction and passion for her was fantastic. I loved how straightforward he is with her. How much he loves her, how much he wants her and how much he wants to enjoy their little holiday. This was the perfect life break from the everyday. Readers get some sexy steamy action; some sweet sentimental moments; and some special interactions with old acquaintances. The Story: Devil and Lexie are the couple that most others aspire to be like but real life often gets in the way. Devil wants to prove to his old lady that he finds her just as attractive today as when they first met.

I loved this book. It focused on mainly on Devil and his wife, Lexi!! In the first book, Devil was a real jerk to Lexi but he redeemed himself and ended up winning her over. This time around, Devil has forgotten their anniversary and is determined to make it up to her. Calling in a favor from one of the Billionaire Bikers, Devil whisks her away to a private island and begins to try and figure out why she has changed her attitude towards him. This is a beautifully written story about a couple who has been married for years now, has children, and is always doing something else instead of focusing on their relationship. Will Devil find out what is bugging Lexi? And then the author has to tease her fans with a bit about Simon and Tabitha. If you follow Sam Crescent, you know what I&#039;m talking about. Anyway, get this book, sit back and enjoy some more of everyone&#039;s favorite MC Prez!!!

Devil is the biggest and baddest of them all except when it comes to Lexi and his family. If you are a fan of this series and this character specifically, then this is a must read for you. Devil is the way he is, without apology. Lexi is his heart and so much a part of his soul that any reader could just read this couple for eternity and never be bored. What I love about this story is that it deals with real life issues of a couple who have been together for years and some of the things that they have to deal with. It is both romance and realistic. This was just a hot, feel good story of how well these two are together and how after all these years they still make us readers swoon. You cannot go wrong with Devil and this just proves he gets better with age. I also love the little snippet of the future MC characters. I received an ARC an am leaving an honest review.

I absolutely loved this book and look forward to hearing more from Devil. I would say my favorite part is when he talks about his sagging butt! OMG, I laughed so hard. Sam Crescent I love you!!!!!

From the very beginning I was able to identify with Lexi, the fear, the self confidence that she lacked and the duty to family and I was rooting for Devil while he figured out what Lexi needed. I am so in love with this couple I will follow them wherever they lead.

Thank you for giving me another dose of Devil and Lexi. That man is one sexy alpha, I&#039;m giving it 5 stars

Devil is so hot..love the Chaos/Skull men, I want simon/tabitha story but afaid to lose the men to the next generation.

Sam did it again this is so great I love the chaos bleeds series I love me some devil and can&#039;t wait for Simon and Tabitha and drafts book!!!!!

I loved this short story of Devil and Lexie with a snippet of Simon and Tabitha thrown in at the end. I have always loved Devil especially because of how fierce his love for Lexie is. Yes, he loves his kids and his club Chaos Bleed but the love he has for Lexie is epic and makes me swoon. Sam Crescent you can&#039;t go wrong when you write about this man and Chaos Bleeds. You know I am a fan!!

I tried to gage Devil&#039;s age when I first started reading this book and then I said to myself it didn&#039;t matter, because whether Devil was 42 or 72, Devil was going to be the meanest SOB around, except when it came to Lacey. Lacey can literally bring him to his knees. He is obsessed over her. His love for her is so deep that he has made plans that if something was to happen to her, his kids would be taken care of and then he would follow her into death. A love like that is beyond anything the majority of people will ever know, yet Lacey, after having several children is starting to feel like every other woman in her 30&#039;s. Her body is not the same as it was when she was stripping and first met Devil, so how could he possibly stop from taking one of the &quot;sweet butts&quot; on the side. Devil sets out in this book to prove to the one woman who completely slays him, that there will never be anyone else for him, and Sam Crescent proved to us, why Devil is the husband we all want and fight on her Facebook page to lay claim to!! I love the snippet that she gives us into Tabitha and Simon and I love seeing the future Chaos Bleeds and Skulls stories starting to take shape.

OMG I&#039;m so happy for this story. Devil is my fav in this series, so to have more of him is always fabulous. And this story made me to remember (If I could lol) once again, why I love Devil so much.