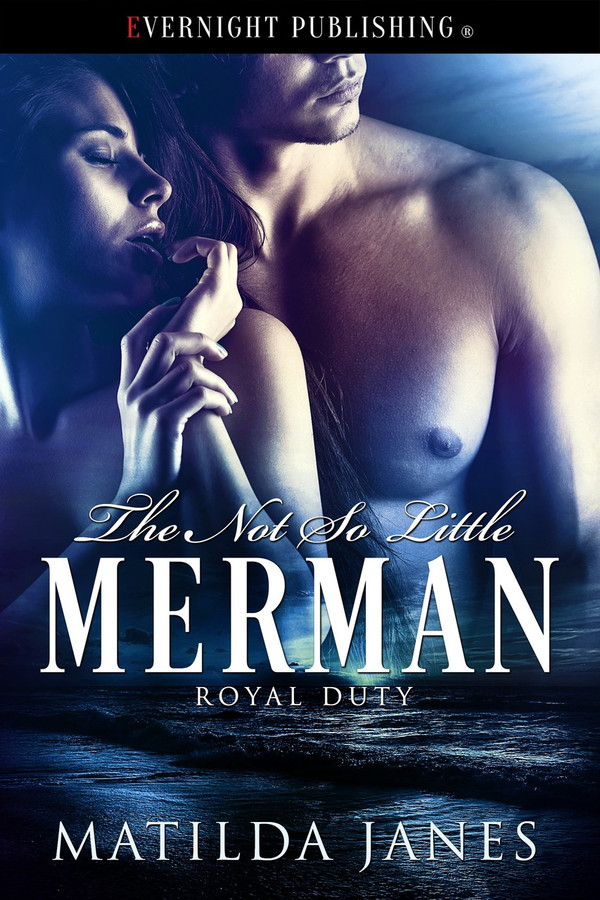 The Not So Little Merman, 1

Mer-shifters have one fated mate, and as the Crown Prince, Alaric has a duty to provide offspring. So when his mate fails to materialize, Alaric has to give up on his happily ever after and accept a bride of his father’s choosing. When his true mate shows up, all bets are off, and the deal turns deadly.

Elsie Johnston has completely lost faith in the opposite sex, a natural reaction to being betrayed by her fiancé and best friend. While honeymooning with her sister, romance and sex are the very last things on her mind. Being hunted down and mated for life to a merman certainly wasn’t on her radar.

Can Elsie accept Alaric after one life-altering bombshell after another? Will Alaric convince Elsie that happily ever afters are possible—even very, very naughty ones?

“Tell me right now if you don’t want me to eat your pussy,” he warned her.

Blinking, she looked at him questioningly. “What? Out here?” Her brow furrowed, and she looked around as if she just remembered where she was.

“Elsie, I’m dying to taste you. Let me eat this pussy,” he repeated as he leaned down, sucking hard on one of her nipples. She cried out, and her head fell forward so her lips were by his ear.

“Yes, I want you to eat my pussy,” she whispered.

“Good girl.” He released her and submerged himself completely underwater.

Alaric forcing her to admit out loud what she felt and what she wanted from him made her even hotter, but her arousal was tempered when he disappeared under the water. Elsie’s heart beat even faster, except now with fear as she suddenly felt all alone out there.

“Alaric?” she called out, then squealed when she felt his hand slowly wrap around her ankle. Then she felt both of his hands slowly moving on her as he traced kisses up her legs and her inner and outer thighs. He moved up until she felt his strong hands gripping the backs of her thighs under her ass cheeks. She couldn’t see him, but she felt him as he pulled her legs apart, holding her open. Then, he tore her panties off with his teeth. Her pussy was bare until he covered it with his mouth, and she screamed out. Her arms flailed, but he held her in place. He kissed her there, long and hard, using his tongue to move her folds to the sides. She couldn’t help but convulse when his lips found and closed around her throbbing clit. Looking down as she gasped for breath, her bare chest was visible in the moonlight and heaving above the water, her nipples straining in the salty air. Mindless with need, she grabbed her breasts and squeezed them, seeking relief.

She felt him shake his head vigorously against her pussy with her clit still captured between his lips, and Elsie came hard. The orgasm took her by surprise, hitting her completely unexpectedly. She’d never had an orgasm so quickly, even by her own hand. Then again, no one had ever motorboated her clit before. She couldn’t help the low, guttural groan that forced its way out of her as wave after wave of white-hot pleasure moved through her center. Her inner muscles clenched, grasping for more. Alaric was still down there, nuzzling her pussy.

“Fuck me,” she breathed out, then gasped for air. As she tried to catch her breath after her mind-blowing orgasm, she wondered, How in the hell is he still down there? She worried when he seemed in no hurry to come up as he rubbed her legs. She’d lost track of time, but she guessed he’d been down for more than a few minutes. He was getting close to the human body’s limit without oxygen. Navy SEALs had to hold their breath for two to three minutes, and she was sure Alaric had been down there at least as long as that, if not longer. Hypoxia was going to set in. Panicking, she tried kicking her legs to get him to move, but he was much stronger than her and her legs didn’t move an inch. She fought with her dress, trying to move it out of the way as it floated up around her and cursing its length. Had she’d known this was going to be an issue, she would have worn a much shorter dress. She found his hair and pulled to bring him up, and was greatly relieved when he finally moved back up her body.

“I intend to,” he told her calmly, after breaking the surface. Elsie couldn’t help but notice he wasn’t winded at all. His shoulder-length hair covered part of his face, but his breathing didn’t seem labored. She grabbed onto his shoulders for support, even though he now held her against him again.

She smacked his chest. “You scared the crap out of me! I thought you were going to go brain dead down there!” she yelled.

“As long as you come all over my face like that, death by your pussy sounds like an admirable way to go,” he said.

I really enjoyed this book it was something different I do hope more come in this series.

I liked the storyline, there was lots of steaminess in it and I highly recommend giving it a shot!

His Forbidden Mate by Matilda Janes

Plain Jane and the Mafia Beast by Sam Crescent

Worth Waiting For by Matilda Madison