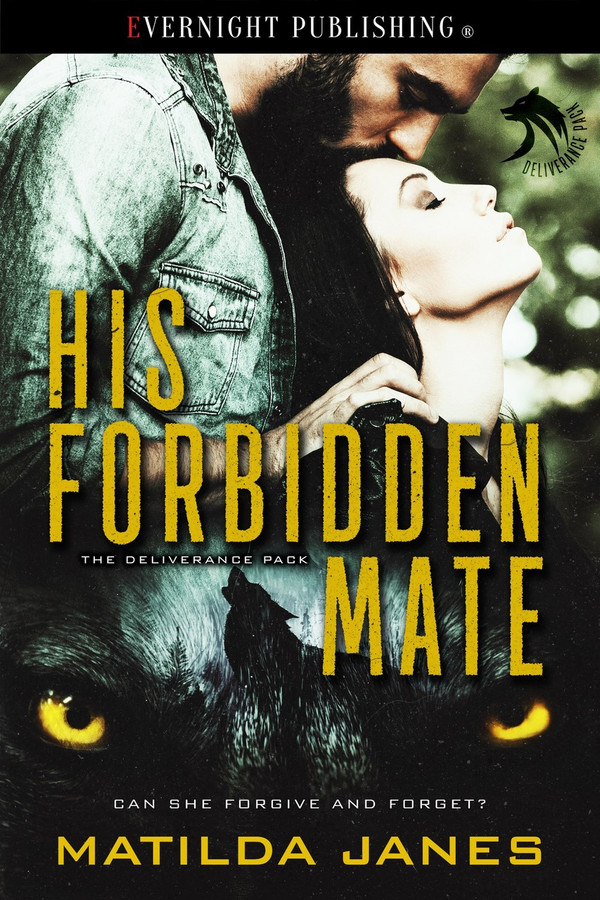 Hannah Martin has always tried to mind her own business in life. She picks up double shifts at the local diner to make ends meet while she saves money for college. She's tired but happy, that is, until Adam Atwood claws back into her life. He bullied and tormented her relentlessly throughout high school, and their most recent encounter at the diner is no different.

But when Adam violently kidnaps her, Hannah discovers not everyone or everything is as it seems.

Wolf shifter Adam Atwood had been forced to turn on his former best friend for no other reason than she was human and that wasn’t acceptable to his pack. Even though it bothered him, he knew he had to protect her. When he finally discovers who she truly is to him, he’s horrified by what he’s done. Can Hannah forgive and forget? Or is it too little, too late?

He took himself in hand. “Yes, I guess I am, but, Hannah we’re mates.” He stepped closer and cupped her cheek. “We’ll fit together, and I’ll go very, very slowly. I can’t promise it won’t hurt, especially not your first time, but I’ll be gentle.” He leaned down and kissed her. “Hannah, if this is too much, just tell me. We don’t have to do anything you don’t want to. For now, let’s just take a shower, okay?”

“Okay.” Hannah swallowed and followed him under the hot spray. She gasped and shivered when he pulled her wet body flush against his. He leaned down and kissed her doubts away before he grabbed the soap and lathered her up. His hands were warm and calloused, and her breasts bounced and swayed under his ministrations, any shyness dissipating with every loving caress. “My breasts must be filthy.”

He gave her a devilish grin. “That’s right. You’re my dirty girl.” He set the soap aside and pressed his chest against hers, and he hugged her tight as the spray washed the suds away.

Her nipples were hard and engorged as they slid back and forth against his slickened skin. Hannah held on to him as he rubbed his body against hers. His erection pressed against her stomach, and she reached down between them, wrapping her fingers around his cock. She was fascinated when he tensed and pulsed in her hand. He was so much different than she was.

“Fuck, Hannah.” He grabbed her wrist, stopping her mid-stroke, but she wasn’t to be deterred.

She needed to taste him like he said he was going to taste her. His eyes widened when she lowered to her knees in front of him. His fangs bit into his lower lip, his expression pained. Emboldened by his reaction, Hannah leaned forward and licked the slit of his cock before taking him fully into her mouth. Adam hissed and growled before he jerked his hips back and out of her mouth. Hannah would have laughed except the scorching yellow eyes staring down at her stole her breath.

“I can’t. I can’t wait any longer. I…” He shook his head and gently gripped her forearms, helping her up. He opened and closed his mouth and swallowed hard. “You’re mine.” He growled and shut off the water, then reached out of the shower and grabbed two towels and handed her one. Hannah couldn’t help but squeal when he lifted her out of the tub and carried her into the bedroom. He laid her down and followed her, his broad shoulders holding her thighs open for him. His growl became louder until it was a constant rumble deep his chest.

Without warning he leaned down between her thighs and nuzzled his way to her clit, pulling it between his lips and sucking hard, and she cried out. Hannah fisted the sheets and writhed against his mouth. He wrapped his arms around her thighs, holding her still as he buried his face in her pussy. The sensation that built was so foreign and so intense it overwhelmed her as he licked and sucked and licked and sucked. Pleasure pulsed inside of her, and Hannah worried something was wrong.

“Wait! Something is happening,” she gasped out.

&quot;His Forbidden Mate&quot; is a short story by Matilda Janes. It is a quick read. The writing, for the most part, was well done and the concept of the story is a very good one. For me, there seemed to be some parts of the story that weren’t covered in as much detail as I would have liked. I would like to see longer stories from the author, as she has a great imagination and her characters are engaging and enjoyable. The Story: Hannah Martin has been working hard to pay for her education. While her widowed mother is out of town, an unexpected person from her past comes into the diner she works at and at that point her world changes. Adam Atwood was her friend at high school until he suddenly wasn’t, Adam cut himself out of her life to keep Hannah safe. Neither of them were prepared for what would happen that night. As their future changes they are drawn closer to one another. As forces move against them they find support from unexpected places.

I love discovering new to me authors who know how to deliver a great story. Matilda Janes easily pulled me into the intriguing paranormal world of her Deliverance Pack. Adam was a perfect picture of a hero in this story. He protected Hannah from his crazy father but in the process he broke her heart and pushed her away. Then he realized that she was his true mate which put her in danger once again. This story had a lively flow with a few extremely climactic moments as Adam and Hannah were on the run with a crazed Pack close on their trail. Their only hope was to make it to the sanctuary territory of the Deliverance Pack. The author did a super good job on the story building for this series by introducing quite a few promising characters who grabbed my attention. I liked that the series will be featuring other types of shifters along with the wolves. They are all special forces trained which is usually intense and super hot. I am very excited about this new shifter series. I can’t wait for the next book.

One of the best books of this length that I have read in years. Fully developed characters and plot and hints of other books and plotlines. The epilogue is a bit pat, but otherwise a great, fun, sexy read.

This was an enjoyable &amp; sexy novella from this new and upcoming author. For its length, the storyline and characters were fleshed out well enough to keep me turning the pages. The epilogue fell a bit flat in my opinion; I wished it was longer than one page. Nonetheless, I really liked this one and look forward to the rest of this series and the author&#039;s work in the future