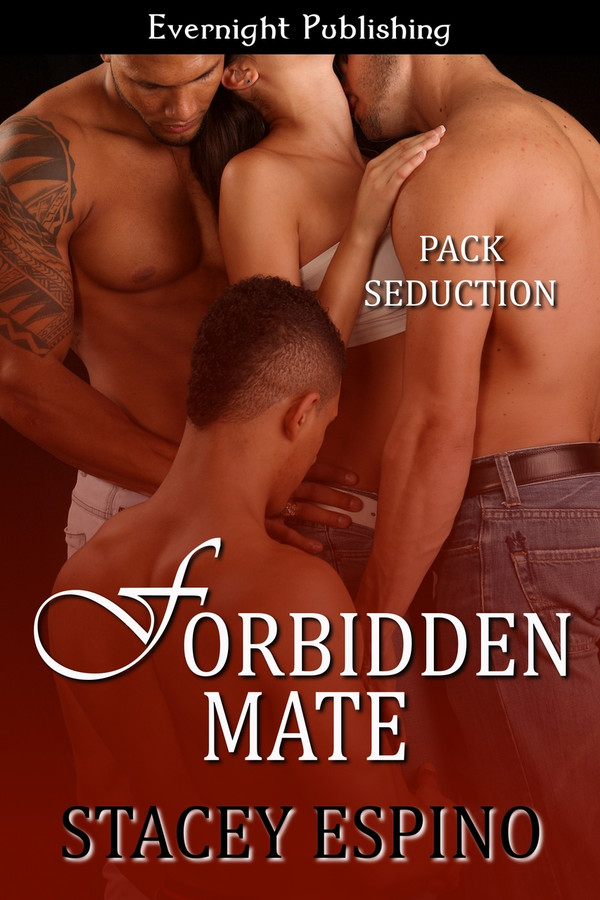 Wesley, Targus, and Marco are everything she's ever fantasized about. They're hard muscle, sex, and dominance—but they're also keeping something from her.

Wesley's position as a Royal Elite guard is number one in his life. Taking a mate is forbidden. Claiming a human female would be the ultimate sin. When an investigation leads him to the doorstep of two wolf shifters, his panther's control is put to the test. They both want the same little brunette making Wesley lose sleep.

With a dangerous suspect still on the loose and old traditions guiding their choices, are the three shifters willing to sacrifice everything for a forbidden mate?

Wesley tried to justify his next actions. How bad could it be to satisfy himself in the arms of a human? His friends, including the Elite, did it all the time. It was just one night, not a prelude to mating. Even Ulric could see he was overdue to bed a woman. It just surprised him that his cock could become aroused by a human female, because it had never happened before.

He wanted Helen, and judging by the sharp scent of her arousal, she wanted him too.

“All I can think about right now is stripping you naked.” He waited for her to react, but she kept still and quiet. “Does that scare you?”

She shook her head. He wouldn’t have been able to notice if he wasn’t a shifter. His panther’s night vision was nearly as sharp in his human skin.

“I promise, if you knew all the things I’d like to do to you, you’d be very afraid.” He punctuated his words by kneading his fingers into her hair and locking her head in place. She gasped as he increased the tension. Wesley instinctively leaned close, tempted to breathe in her scent again. How could he feel these potent emotions for such a frail little thing? Maybe his panther had been wrong. Once he confirmed she was nothing special, he’d be able to walk away with no regrets.

But there it was again. The smell of her skin, her hair, her breath—it pulled him in like a potent aphrodisiac. He licked the pulse point near the base of her neck, tempted to sink his fangs into the soft flesh. He was fucking losing his mind, confusing sex with the mating call.

“Still not running?” He didn’t want to force himself on her like that lowlife coyote.  He needed to give her every chance to run off and not look back. Once this started, it wouldn’t stop. And he wouldn’t be sweet and gentle like a human male. He was painfully pent up and hyped up on whatever spell Helen managed to cast over him. In his last honorable act, he’d make sure he sent her racing from the forest before things went too far.

Wesley reached around her and grabbed the fleshy mound of her ass, pulling her flush to his body. She gasped and braced her forearms on his chest. He bunched up the material of her skirt in his fist until it was nearly at her waist. Then he slid his hand under the edge of her panties. “Have you ever been fucked here?” He pressed the tip of his finger against her asshole, certain she’d take off screaming.

She swallowed hard, clenching the tight little rosette. Her desire perfumed the air around them. The girl was completely gone, making his act of valor more and more difficult.

“Answer me,” he said, holding his finger in place.

What was he doing? Helen was playing a game she was never meant to play. He could hear the innocence in her voice, the caution in her words. Any other male would have succumbed by now. And if she was a shifter, Wesley had no doubt she’d be on all fours with his cock deeply embedded in her cunt.

“Turn around.” He gripped her shoulder and whirled her around until she faced away from him. Then he forced her down over the waist-high stump of a massive oak tree. He pinned her in place with a palm to her back while he roughly hiked her skirt all the way up and stomped down her panties with a foot.

Wesley stopped what he was doing for a moment and admired the woman beneath him. She had the perfect ass, round and tight with just the right amount of jiggle. He wanted to smack it to hear the sound it would make. In fact, he wanted to lick every inch of her delectable body, taking his time until she was begging him to fuck her.

“What are you doing?” she whispered.

“I’m going to give you what you want. Give you something new to experience.”

Her breathing picked up on cue. Any minute and she’d change her tune.

He parted her legs with his thigh to give him enough room to access her pussy. She was sopping wet as expected, her folds swollen and ripe. He couldn’t help but run his fingers along her slit a few times, dreaming of how it would feel to sink his cock in deep. His panther wouldn’t last much longer. He needed to frighten her enough to send her running.

He dragged the moisture from her pussy back to her ass and slowly impaled his thumb into her virgin hole. “Next will be cock. Can you handle that?”

She pulsed around his digit, clenching and unclenching. “Yes.”

What the fuck? She was acting like a she-wolf in heat. Wesley did everything he could to scare her off—and failed.

This time he made the choice for her. He walked away.

Oh, I loved this book so much! I fell in love with Helena and her sexy men, Wesley, Targus and Marco. This pairing was so freaking hot and wonderful. I loved the shifter element too! I could not stop reading as Wesley met Targus and Marco. They were all competing for the beautiful brunette. This story wasn’t just romance, oh no, it had action too!

Wesley, a member of the Royal Elite Guard and a panther shifter, was moody and restless. Ever since his friend had mated Princess Deliah he felt as though his friend was no longer the same. His friend is no longer a member of the Elite, but rather now a member of the Royal family. Times and ways were changing and Wesley wondered if there was a place for the Royal Elite in the future of the shifter world. He had given everything he was to his vows to protect their queen, her daughters and their way of life. With each of the daughters now mated with protectors of her own what did the future hold for him. A new threat to the Royal Family is all that is grounding him. His training called to the front, but his panther was wanting something more. Looking for some mindless release, Wesley heads toward the town’s shifter bar too look for a partner for the night. When he get there he finds the noise too loud and the place too crowded. He decides to just go to his place and get a good night’s sleep. As he walks home he hears a woman&#039;s voice coming from an alley. She is pleading to be let go. Unable to walk away he saves her from a coyote shifter and then walks away. Wanting to thank him Helen Cooper follows him to the woods where sensual tension abounds. But Wesley walks away from her once more. The next day, Helen finds a man passed out on the ground outside her hotel when she heads toward the tour bus she is a guide on. When she stops to help him, he is startled and grabs her arm. Marco has kept to his and Targus cabin since the death of his mate. He has no desire for another one, especially a human. He too walks away from Helen. Later walking around the lake she meets another man and he too draws her and she begins to think there is something wrong with her. Yet Targus knows who and what she is and he doesn&#039;t plan on walking away. This story is the fourth in the Pack Seduction series and Stacey Espino proves she still knows how to deliver a tension filled story with a clear storyline. Readers are in for a pleasurable afternoon&#039;s reading session. The author builds a relationship with enough twists and turns to make you wish you could trade places with the heroine. In this particular story Helen has not one, but three different men interested in claiming her for their own. It slowly develops to the point where each must choose what is more important. Will it be tradition, law or the love that only comes to us once in a lifetime? How would you choose? I choose the love and I’m hoping Ms. Espino offers more in this series soon. There are dangers lurking and three shifters may not be enough to save Helen from the unexpected. Pick up your copy today and decide what you would do in their place. Stay or run, the choice is up to you. Are you brave enough to take on the world for the one you love? Is love enough to save the one you love?