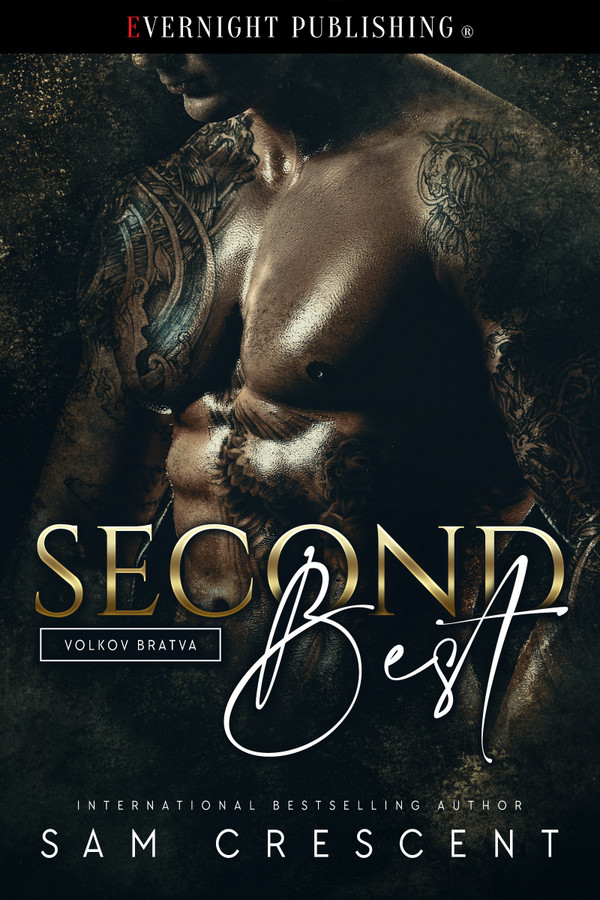 I was given to Slavik Ivanov, a deadly, fearsome man in the Volkov Bratva. Married into the world of the Bratva, I have to learn to survive. My husband doesn’t pay me attention, but the longer he ignores me, the longer I’ll live.

Trouble is brewing in the Volkov Bratva. It’s dangerous, and I know it’s only a matter of time before I’m killed because I’m the stranger. The enemy.

Slavik doesn’t love me. I’m nothing more than a duty to him. I’m an obligation, but when he finally notices me, his touches set me on fire.

Does he know I’m loyal to him? Or will he believe the orchestrated lies and finally get rid of the wife he never wanted?

My life is in his hands, and I fear I will never be the same again.

I was already heading toward the pool. In the elevator, I rubbed at my temple. I hadn’t slept in two days so far. Sleep rarely came to me. I had no trust in anyone around me, and right now between Cara’s problem, and now the Italian one, there was no way I was going to relax.

You were killed if you let down your guard, and that was the last thing I was going to do.

The elevator went down to the level with the gym and the pool. I saw the sign posted, stating the pool was closed for the time being.

As I entered, I caught sight of my wife wearing a one-piece swimsuit. She had her arms crossed over the edge of the pool, and Sergei, as far as I was concerned, looked a little too cozy with my wife, which pissed me off.

We’d been married a little over five months, and as I watched them, I didn’t like how close they seemed. Anger worked up my body as I stepped into view. The moment I did, the smile on Aurora’s lips fell and Sergei stood.

He nodded. Without another look at my wife, he left the room. Alone with my wife, I saw Aurora move back into the water. We looked at each other.

She wasn’t a stunning beauty, but there was a beauty there. I’d had my fair share of fake beauty. There was something about Aurora that called to me.

“I didn’t know you were coming home,” she said.

“It would be wise of you not to flirt with my men.”

This had her frowning. “I wasn’t flirting.”

“You think I didn’t see what you were doing?”

She looked to where Sergei had left. “We were just talking. Not everything between a man and a woman has to be about … sex.”

My cock twitched. I hadn’t gotten the pleasure of enjoying my wife. She’d moved toward the edge of the pool, and as she grabbed the side, I watched as she pulled herself out. I admired the curves of her body. The fullness of her ass. She grabbed a towel.

“If you continue to flirt with Sergei and give him the wrong message, I will kill him.”

This made me laugh. I couldn’t help it. Sergei wasn’t a friend. None of my men were her friends, and if given the order, they would turn on her at a moment’s notice.

What I didn’t expect was the slap to the face. I captured her hand and pulled her against me. She began to wriggle, and with how close her body was, I had no problem with it. Not that I’d force her. Rape wasn’t something I wanted to ever experience.

Staring into her eyes, I restrained her, making her pause with a single hand on her ass. I gripped her tightly, and tears filled her eyes.

“Don’t ever fucking do that again.”

“Then don’t accuse me of doing something I never did. I don’t flirt. I wouldn’t even know how.”

“My men know the rules. You’re a job to them, nothing more.”

She wore a good mask, but I saw my words had struck her hard. “You think I don’t know that? It’s all I do know. I’m a job. It’s why I don’t flirt. Now let me go, or is there something else you want from me?”

Her lips looked really tempting, but my anger was not in a good place. I released her, and without a backward glance, she left. The curves of her ass just begged for me to call her back and show her what real sex was all about. The two times I’d fucked her hadn’t been real. It had been mechanical, a necessity and then a release. I wanted her again, but not tonight. I never allowed my hormones to take charge. I was the one who held control over myself, no one else.

Aurora has always been the forgotten and ignored one, unless it is to take a beating for whatever bad thing her sister did. Now she has been used as a bargaining chip to unite two families and no one asked her opinion. Of course, in the Bratva, women do not get a voice. Now, she is forced to once again, take a hit for her sister and become the second best as she will always be. Slavik was following orders when he married Aurora, but little did he know but she would change his whole world. He started out wrong because truthfully, he had no idea what to do with his wife. When her light begins to shine, his enemies think to use her to get to him, but what they could never know is that no matter what they thought of her, he knew the truth. Aurora becomes just another pawn in the Bratva game, but this time it just may get her killed. Will Slavik learn to trust his wife or will he lose her to the danger within? Can second best become first, or will Aurora always be the loser in every game? The writing of Ms. Crescent guarantees an emotional response with every word. I was left hanging through every page – never knowing who would stab who in the back and never being able to figure out how it would all work out. In the end, I found myself attached to the characters – even the ones who appear to have no redeeming value. I highly recommend the writing of Ms. Crescent and her Bratva story.

I loved every page of the book. So so many plot twists. I cannot wait to dive into the author&#039;s other works. A massive 5 stars from me.

OMG another fantastic book and I’m very excited to looking forward to more in this series. I found it really hard to put this book down and loved all the characters especially Slavic and Aurora and the way their relationship changed. I really took a dislike to her family and some of the other women. This book sucks you in and you don’t want to put it down as you want to know what happens next.

Ok I loved this story . It was real .it took work . Parts were a little over the top but it was a fast read. Good writing

This is another great story from Adam Crescent. These two were not supposed to be a love match, but our hearts will always have their own way

This book really took me by surprise. Characters were very interesting and you needed to keep reading to get to the end. Will there be a story of Ivan or Andrei?

Absolutely fantastic Sam! You have threw the ball out the park with this book. Loved it from start to finish. Slavik I loved him then I hated him then I loved him again. As for Aurora she was just the sweetest women ever!!! Well done Sam

This was one of the best books sam has done I love her work always can&#039;t wait till the next one

OMG, Sam has outdone herself. Slavik and Aurora are my new favorites. Following their story had me on the edge of my chair. The danger, the lies, deceit and threats just kept coming. I love mafia books and Sam Crescent has placed herself at the top. Keep them coming, Ivan needs a book!

I really loved how Aurora was plus size and having to learn to accept herself was really great to read! Also Slavik learning to love her and appreciate her was really cute! Really great book! I hope Ivan’s story is also great!

I have been anticipating this one, and Sam didn&#039;t disappoint! Slavik and Aurora&#039;s story was amazing. You couldn&#039;t help but feel sorry for Aurora and the way she had been treated in her life. What a great start to the series!

Definitely a good read. I just wish there was a little more action in the story. I also didn&#039;t really like how Aurora and Slavik&#039;s relationship started. To me, it seemed like there was too much drama in the beginning. The ending was good though. I would definitely read the second book.

I love mafia stories. And this Bratva story is so amazing . There is excitement , treachery and lets not forget the hot romance !! This author did an outstanding job with this read !! I can not wait to see what&#039;s next !!

This book has some of my favorites hidden between the pages! A Bratva romance, an emotionally distant, over the top alpha male, and an innocent who is more than capable of navigating shark infested waters, but is a novice with issues of the heart. I enjoyed the gentle buildup of their relationship, and I adore what it seems Ivan, and the author, have in the works for all the men of the Bratva. I can’t wait to see what happens as each one of them fall for their own HEA. The author kept the story moving with action and danger, and a twist that I never saw coming. This book is a fantastic debut into the world of the Bratva.

Absolutely fantastic Sam! You have threw the ball out the park with this book. Loved it from start to finish. Slavik I loved him then I hated him then I loved him again. As for Aurora she was just the sweetest women ever!!! Well done Sam

This was one of the best books sam has done I love her work always can&#039;t wait till the next one

I love mafia stories. And this Bratva story is so amazing . There is excitement , treachery and lets not forget the hot romance !! This author did an outstanding job with this read !! I can not wait to see what&#039;s next !!