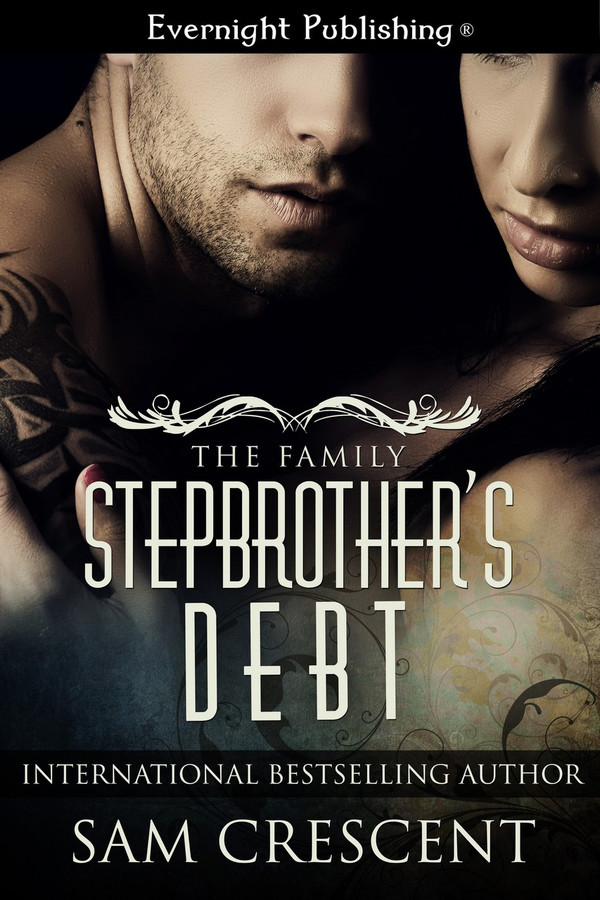 Once you’re part of The Family there’s no getting out!

After Paige’s father disappeared without a trace she never expected her mother to find another family, but she does. Paige’s world is turned upside down when she discovers Donnie Martinez is her brand new stepbrother. He’s dangerous, vicious—and Paige realizes the rumors about Donnie and his family are true. Her new stepfamily is part of the mafia. Paige doesn’t intend to stick around to get mixed up in those problems. The moment she can, she’ll be gone.

Ordered by The Family, Donnie has to get close to Paige in order to find out what she knows about her father’s disappearance. But he finds Paige herself to be worth more than her information. He doesn’t want her to end up dead, but on the day of her eighteenth birthday, there is only one way to save her.

Indebted to Donnie, Paige has no choice but to do as he says. She must marry him in order to stay alive. But how can she be with a man who has taken lives for The Family? Is there any way out for all of them? Is it possible for Paige to love a monster? Can Donnie overcome a lifetime of training to discover love?

“What are you doing? Let me go.” Grabbing her hands, he pressed them up above her head in a similar position he had her in a couple of weeks ago.

“No. I’m not going to let you go.” Holding her in place with one hand, with his other he stroked down her body, finally allowing himself the pleasure of touching her. He slid his hand down her arm, going around her neck, and staying there for several seconds. Her pulse raced against the tip of his fingers. Donnie didn’t move away, letting her know not to test him. His father was a monster, but so was he. She’d seen him coming home covered in blood. Paige hadn’t witnessed his cruelty, but if she pushed him, he’d have no choice.

Caressing down her body, he cupped her tit, stroking his thumb over her budded nipple. She gasped, freezing beneath his touch.

“I know you want me as much as I want you.” He pressed his cock against her stomach so she knew exactly how much he wanted her. “I’m going to really fuck you hard when we’re married, Paige. I’ll always be your fucking stepbrother, but you’ll be my wife.” She wasn’t wearing a bra, and he pushed his hand above her shirt, finally cupping her large tit in his hand.

She wasn’t fighting him, and he was sure he scented her pussy. Her eyes were dilated, and she didn’t look away from him.

“Donnie,” she said his name on a moan.

“That’s right, baby. You’re going to be all mine. Moaning my name as I fuck your tight little pussy. You’re a virgin, and on our wedding night, I’m going to make you mine. No other man is ever going to know how good you feel.” He pressed his nose against her neck, breathing her in. “You smell so damn good.”

He released her breast, hearing her whimper as he glided his hand down to her stomach. She quivered beneath his touch. He didn’t stop there, going down to her pants. The pajamas were no protection against him.

Cupping her naked pussy, he groaned. The fine hairs covering the lips of her snatch were wet to the touch.

Sliding his finger between her slit, he stroked over her clit. She moaned, wriggling on his finger. Sucking on her neck, he moaned, wanting her own hands on his. There would be time for that later. He wanted to give her pleasure and to show her exactly how good it could be between them.

I really liked this story,it was put together nicely,the love Paige and Donnie had for each other was wow,intense,I loved it,can&#039;t wait for the next installment,I highly recommended this book

All I can say is WOW I loved this book The Mafia family where everyone is not corrupt. Loved Donnie and Paige the way he protected her true Alpha Male as was his friends Jake, Tonio, Luiz this second generation is no joke they know what the want and aren&#039;t afraid of going after it. Can&#039;t wait for Tonio and Maria&#039;s book there&#039;s a lot of pain between those too. Great job Sam Cresent

This book was Intriguing, captivating, Intense, and Wicked and I loved every minute of it thier is just something about Sam Crescent, writing it sucks you right in you never know what she will come up with next and I love that. Paige, and Donnie are two characters they you will just love they have an undeniable, Intense, connection to eachother but thier is so much more thier charater development was well written great job Sam, I cannot wait for more of this seris what an amazing start! ARC received in exchange for A honest review.

All I can say is WOW!! Such chemistry. I love books about forbidden love. I&#039;m always curious how the writer tackles that issue and Sam Crescent nailed it. This book gives you a look inside the life of the mafia. Once you&#039;re in, you can&#039;t get out. Well written. Can&#039;t wait for book 2.

If you love Sam Cresent&#039;s other books, I guarantee that you will love this one as well. It has a great plot and storyline. The ending is for the better, and she leaves you wondering when the next book will come out. Paige and Donnie&#039;s life may not have started the way they wished, but you will want to read more about them to find out what happens next.

This first book is just as you would expect to be by this amazing author! Written well and to a high standard. The story is excellent and has you hooked from the get go! We meet Donnie the young son of one of the main heads of &quot;The Family&quot; Even at his age he has the reputation of someone who is double his age. He is a formidable opponent to anyone and has been groomed by his father since birth to take his rightful place amongst the family when the time is right. Then we have Paige, a shy quiet girl, who keeps to herself and just tries to get through each day as her and her mother try to survive when her father is gone. When these two ... Donnie and Paige&#039;s worlds collide it shows that people are always more than you expect and can surprise you at every turn. Never underestimate a person on an assumption just because of what they look like or who their family is. As this story goes on we see things amongst the family change, opinions and loyalties, hopes and dreams but through out it all Donnie and Paige find an unexpected bond that forms when they least expect it and shows if you trust the one that you love you will never be sorry. As I say this is the first book in this exciting new mafia series and I cannot wait for the next one! So many possibilities and plot twists could make this series one of the best of the year. I really hope that you enjoy this read as much as I did. Even though the step brother theme has become immensely popular right now this story is still worth a read I did not want it to end! And again as I previously said even though this is a taboo tale of sorts as in some peoples opinions and it is not the done thing, there is nothing wrong in this story at all and no intimacy between blooded relations at any point, it is not a story of incest or anything of the kind.I thoroughly enjoyed it and wholeheartedly recommend it! Happy reading!

In love with this new mafia series! Hope to read Maria and Toni&#039;s romance next! Intrigued for more!! Press buy!

Sam Crescent has done it again. I really enjoyed this book, but again, anything written by Sam Crescent is so worth reading. I can&#039;t wait to get the next book in this series. This is the story of Paige and Donnie. Read it you will enjoy it.

Awesome book! Can&#039;t wait for more of this series!

Best stepmother book I have read ever. I don&#039;t read a lot of them either but OMG. Crescent has taken stepmother romance and mafia romance to an all together high. I want more stories about Tonio,Luiz and Jake please.

*ARC* Review Sam has done it again! From the beginning Donnie had me melting for him. He is all a**whole and commanding that I couldn’t resist his “charm”. The moment I figured out what was happening I couldn’t put it down. My heart was racing the whole time for what would happen to Paige. This book is one of those that make you want to scream at the book “You love her!” but that would be weird public. But then again that’s what one of Sam’s book does to you. I wont give much away because I don’t like ruining the ride for anyone.But I will say it will blow you away and the end will catch you of guard. Thank you Sam!! Can’t wait for more from The Family, XOXOXO

this is one of the best books I have read from this author in a while. great characters and a wonderful plot. I loved how the male character had some vulnerabilities even though he was in The Family. good strong characters