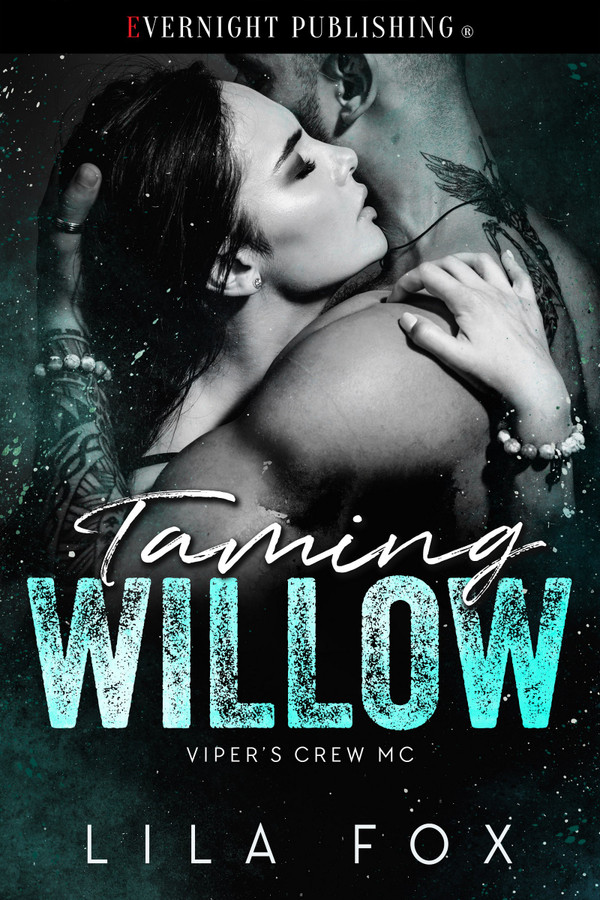 After growing up the hard way, Willow has learned to be tough to survive. She doesn’t take shit from anyone, not even the crazy biker everyone fears.

Blood wasn’t aware he wanted a woman of his own until Willow dropped into his life. She’s perfect for him in every way. Now, faced with a threat from another MC club that’s determined to kill everyone in the Viper’s Crew MC, he just needs to keep her alive.

When they lose two of their own, Blood refuses to let Willow be close to any danger. She’s the other part of his soul, and he won’t be able to live without her. If something were to happen to her…

They thought he was crazy before, but they don’t know half of what could happen if he loses her.

She was pissed that he decided they would share a bed without talking to her about it, but every thought she had fled when his shirt came off, and she was able to see every muscular, tattooed inch of his chest. Her mouth watered, and her fingers tingled, wanting to touch him.

Slowly, his threat of stripping her penetrated the fog in her brain, and she jerked her eyes away.

“I’m going to shower.” As she grabbed her bag and hurried into the bathroom, she gritted her teeth when she heard him say, “That’s probably a good idea.”

She made herself quietly close the door when she really wanted to slam it—preferably on his face.

Willow made sure the lock was engaged before she tied up her hair, stripped, and jumped into the shower. She didn’t like the way she felt so vulnerable being naked a room away from him. Maybe it was the fact he could get through the ridiculous bathroom lock with minimal effort or how he made her feel was beyond anything she’d experienced in her life, and she didn’t know how to handle it.

After drying off, she pulled on a pair of shorts and an oversized t-shirt she usually slept in. Then she brushed her teeth and combed out her hair before she opened the door.

When she came out, the first thing she saw was a sleeping Blood sprawled across the bed in just his unbuttoned jeans, leaving no room for her. God, he really was the most beautiful specimen of any male she’d ever seen. He had colorful tattoos all down his arms and torso. She saw one that slid under his jeans, and she wondered how far that went. His hands were huge, and his fingers were interlocked on his stomach.

While asleep, he should have looked relaxed, but he still carried that dangerous, lithe look and power in every pore of his body.

She set her things down and wondered what she should do. She looked toward the door, thinking she could probably make it out of the room and then go get her own, but she didn’t want to push him more than she already had.

Instead, she walked over to the side of the bed. “Blood.” He didn’t wake up, so she got a little closer and reached out to tap on his shoulder.

A scream tore out of her mouth when he jerked awake, grabbed her, yanked her onto the bed, and lay on top of her with his hand on her throat.

She slapped the hand around her throat. “Blood, wake the fuck up.”

“I’m awake,” he said. “Now.” He loosened his hold. “Babe, don’t ever touch me when I’m sleeping. I could have killed you so easily.”

“I tried calling your name, but you didn’t wake up.”

She had one of her hands around the wrist of the hand that held her neck, and she tried to tug. He wasn’t putting pressure on it, but she still felt threatened.

“Because I want to kiss you in the worst way, and I’m trying to talk myself out of it. But it isn’t working.”

She stared up at him in shock and confusion because she didn’t know what she wanted him to do at that moment either.

Before she could decide or take a deep breath, his head dropped down, and his lips took hers in a kiss so blatantly sexual, her whole body lit up.

She heard a groan and didn’t know if it came from him or her. He wrapped his arms around her and swiveled his hips to make a place for himself in between her thighs.

She tore her mouth away when his cock pressed down on her tender clit, sending her desire to an all-new level.

“Oh, God,” she said. Her head tilted back, and her eyes closed.