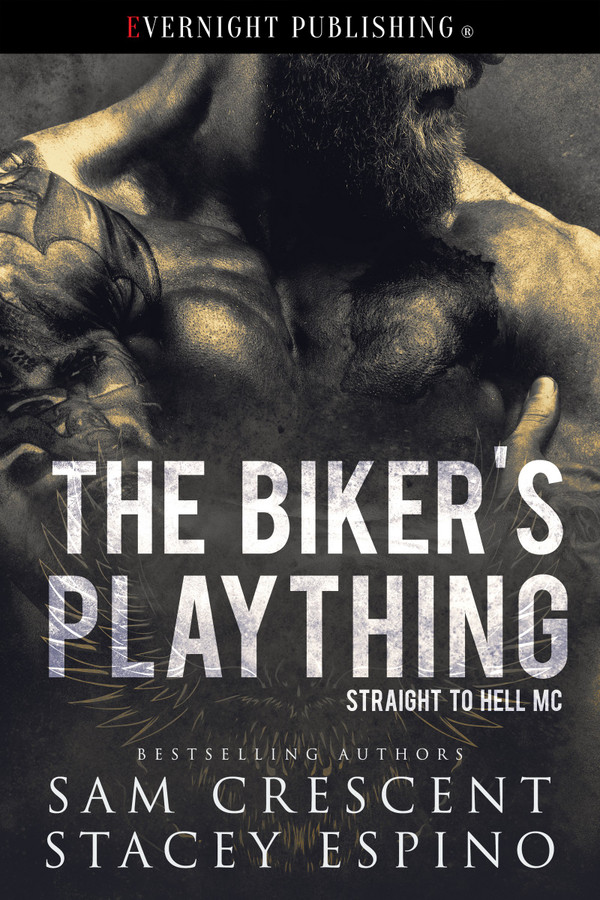 Lord:
One thing I won’t tolerate is a rat. When anyone on my payroll screws me over, I enjoy making an example of them. It was no different when I caught my accountant selling club secrets to my enemies—I made him suffer.

The rat had a daughter, and it was only fitting to wipe out the bastard’s bloodline. When I had Ally Prixman at my mercy, things didn’t go according to plan. There was something captivating about the curvy blonde, and I couldn’t pull the trigger. Instead, I offered to keep her as a plaything. She’d fulfill all my sexual fantasies until I bored of her, then she could have her freedom. Ally had no choice but to agree. And I didn’t expect to keep her for long.

Ally:
He killed my estranged father and wanted me dead. For some reason he decided to have mercy on me, although I’m not so sure being Lord’s sex toy is much better than death. He’s the leader of the Straight to Hell MC and known for his brutality. Surely he won’t have mercy on me for being a virgin.

I’m mad at myself for not hating my situation more, but I’m impossibly attracted to Lord. His scars and tattoos don’t scare me, and it doesn’t take long for me to fall for the biker. I have to remind myself I’m only a temporary part of the club. Lord’s only using me up until he spits me out. Some men just aren't capable of love.

Bobby’s old farm appeared ahead, and Lord slowed down his bike before turning onto the unpaved drive. The other bikes settled around him, cutting their engines on cue.

“Don’t worry about it. She won’t be for long.” Lord headed toward the house, but Bobby Joe Ranger came stumbling off the porch, pulling on a plaid shirt as he neared.

Lord nodded toward the cruiser.

“Oh. Yeah, she’s just where you told me to leave her.”

It had been a frigid night. Maybe the girl was already dead.

The cop walked along a beaten path, his keys jangling in one hand. He unlocked the trunk and flung it up, a huge smile on his face. “It was so damn easy. I picked her up as soon as she left work last night.”

His VP stepped forward first, glancing into the open trunk. There was no sound, no movement.

“Boss, how old you say this chick was supposed to be?”

He narrowed his eyes, looking over at Brick. “Why?”

Richard Prixman had been older or at least he had some fucking city miles on him. Lord expected a woman in her thirties, but when he joined Brick at the open trunk, those big green eyes staring at him were pure innocence.

He looked over at the cop. “How old is she?”

The cop handed him her license. “Just turned nineteen. Works at a local bar. No record. No location on the mother.”

Lord looked at the license, then back at the girl. “Get her out of there.”

Brick and Stump unceremoniously dragged her out, dropping her down on the dirt by his feet.

“She’s a big bitch. It wasn’t easy getting her in there by myself,” said Bobby.

Lord froze in place, staring at the cop, suddenly feeling the overwhelming urge to punch the smug look off his face.

He returned to the present, squeezing and releasing his fist to calm himself down. Stump stood next to the girl, a questioning look on his face.

This was the day he’d been waiting for, so why did it feel all wrong?

Lord walked over to his men and the girl sitting on the dirt, the sound of each booted foot distinct in the early morning hush. He crouched down, his leather jacket creaking as he leaned over his knees. He reached out one arm, using a curled finger to tilt her face toward him.

“I told you it’s her, Lord. There’s no mistaking it,” said the cop.

Lord whirled his head to the side. “Did I fucking ask you a question? Keep your mouth shut if you know what’s good for you.”

He returned his attention to the blonde.

He nodded. “Then you’re exactly the girl we’ve been looking for. Do you know why you’re here?”

She shook her head. “I’m guessing this is because of something my dad did?”

Why was he noticing the bruise forming on her temple or the way her full lower lip quivered? He usually started these interrogations with a lot less conversation and a lot more pain.

“Richard Prixman. You don’t look anything like him,” Lord said.

She shrugged. “He was a sperm donor, that’s about it.”

Lord chuckled, so did Brick.

“Well, regardless of how you two spent the holidays, he’s still your blood, and that motherfucker screwed me over.”

He smirked, and it wasn’t the kind before he gutted a man. It was a real fucking smirk because, for some odd reason, this girl amused him.

Lord stood up, stretching out his legs. He motioned for Stump to get her to her feet.

He paced back and forth.

“Your father tried to sell me out. He abused my trust, and I don’t take that lightly.” He stopped, running one hand through his hair. “As for who I am, sweetheart, have you heard of the Straight to Hell MC?”

I choose this rating because the book was to my liking. I loved the whole story. I would send it to all friends and family members to read.

I love this story. Lord and Ally are great together. I enjoyed every moment. The writing and flow of this book is done well. I do recommend this book.

I just love a good MC story and this one did not disappoint. Lord was a great president - ruthless, cold and hard. He takes one look at Ally and falls in love. I hope this is the start of a new series.

OMG! Loved Lord &amp; Ally. This new series is incredible. Lord is a tough President of an MC &amp; Ally an excellent heroine. This is a harder MC series but definitely a Must Read! Great story! Can&#039;t wait for more in the series.

Lord and Ally are the perfect start to this new MC series! Fate brought them together and love will keep them that way! This book is the perfect mix of action, suspense, danger, and smoking sexy time! Looking forward to the next book already! Sam and Stacey are amazing storytellers!

Lord doesn&#039;t like rats and he has no problems getting rid of them. And he will use the rats family as examples to the rest of the world to not cross him. But when Ally&#039;s father does cross him, she is taken. For some reason he doesn&#039;t understand, Lord decides to keep Ally as his plaything until he gets tired of her but feelings come into play and he finds himself falling for her instead of wanting to get rid of her. As their relationship develops, trouble looms in the form of another MC that is after Lord. Will he be able to save her and save him club at the same time? And will she want to stay with him in his world? Great connection between the two characters and I loved the secondary characters and hope to see them in future stories!