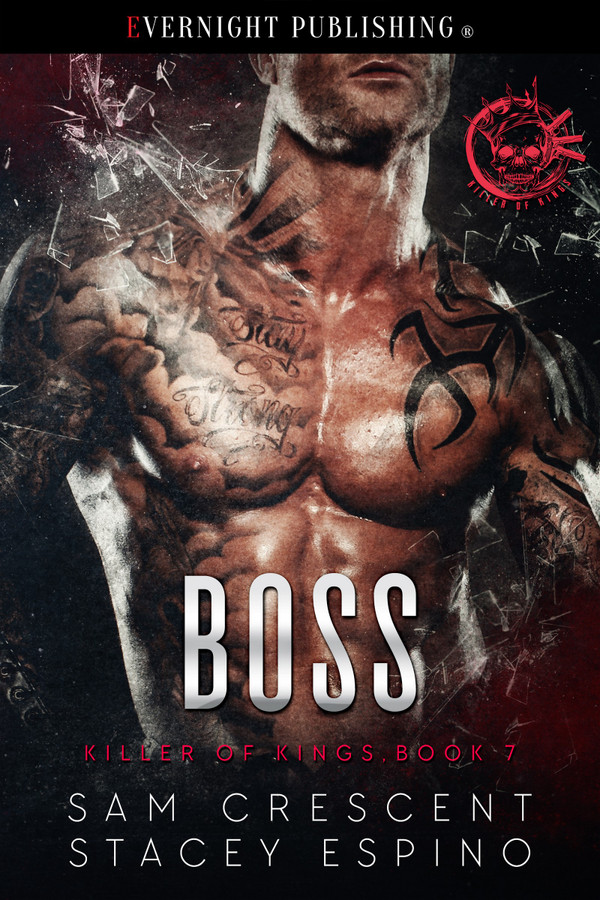 Even the killer of kings can’t hide from love forever…

Boss’s underground empire has a ruthless reputation for getting the job done. He’s at the top of his game, has more money than he could ever spend, and is feared by his enemies. Then why does his life feel so empty? He decides he needs more challenges, so he puts his energy into new contracts while investigating why innocent people around his city are dropping dead by the dozens.

Graciella made a huge mistake and needs to remedy the problem. To finance her mission, she’s forced into a lifelong debt to a madman. Still, she’s more worried about Boss finding out what she’s done. He’s known for doling out swift, brutal justice, and she’s already on his shit list.

They’re forced to team up to find the men behind an evil plot, or one of the Killer of King’s men may not come out alive. Graciella wants to clean up her mess and disappear—but Boss won’t let her slip away so easily. He demands more from her than she’s capable of giving. Not all girls deserve the happily ever after.

One thing he wasn’t interested in was a conversation with his date. He should have skipped dinner and went straight to fucking.

As he zoned out, staring at the candle lights flickering on the tables, something caught his eye. A flash of bright red. He focused for a second and immediately sat up straight in his seat. It was Graciella Moreno. At the same restaurant as him?

She did a quick sideways glance in his direction as a man pulled out the chair for her. Her sly smile was proof she’d seen him first.

“Are you okay?” asked his date.

He wanted to tell her to fuck right off, his attention riveted on the beauty a few tables over. Instead, he pushed the breadbasket in her direction and told her to eat up. It was a while later when Graciella stood up, excusing herself from the two-person table.

Boss had been monitoring them the entire night. He kept track of everything. Who the fuck was her date? Was he a mark or was this personal? He kept imagining choking the life out him, then emptying a clip into him for good measure.

Widow Maker walked in his direction. Her red dress looked like velvet, trailing all the way to her ankles, the side slit reaching just below her left hip. Her lips matched the dress, her long black hair pinned to one side with a diamond clip. Boss swallowed hard.

“Imagine finding you here,” said Graciella, leaning over the table, a clutch purse in her hand. He had no doubt it carried a gun. The dress barely contained her tits as she faced him.

Graciella glanced at his date, then back to him. “Nice. Fiancée?”

“Aren’t you going to introduce us?” Graciella asked.

Did she realize he didn’t know her name? “I wouldn’t want to take time away from your date.”

She nodded. “You’re right. I better get back to him before he worries.”

“Nice meeting you,” she said to the girl. Graciella stood up straight. “You should be careful about being so predictable, Boss. It could be your downfall.” She winked and sauntered off like a fucking queen. He watched the sway of her hips, the confidence and grace in the way she carried herself. She was a true professional, and any mark would be helpless under her wiles. No doubt she’d be pissed with him tomorrow.

How was he supposed to eat now? His appetite had vanished the moment he noticed her in the restaurant. He went through the motions, ordered, and picked at the food. All the while, keeping tabs on Graciella. She kept laughing at the man’s jokes, touching his arm, and making sure to look over at him once in a while with those evil eyes.

Never in his life had he felt jealousy for a woman—until tonight.

It was the Killer of Kings that did it for me. The curiosity of how what a book in that series would be like? Will it be a dark romance? How dark can it go or will it go? Will they be able to resolve whatever issues they may or may not have and be together? One of the difficult things that were there for me was the main character was called Boss. It was not easy reading a book where they call themselves Boss. There was not a lot of information given about his history. No details. But that topic was touched in the book, so it was not ignored by the author. This is obviously a series. Many characters and couples appeared again and again as secondary characters that were like main characters in other books in the series. It does feel a bit like maybe I should have read the other books. It would give me a better back-story on all the characters since they appear and re-appear in the series. Graciella has not had a good childhood. She has trust issues, likes to work alone. She is an assassin as good as the ones from Killer of Kings, or maybe better… She can take care of herself. I loved that about her. She is not a damsel in distress who wants a prince charming to come to her rescue. Boss! No one really knows much about him. He is meticulous. Deadly. He has his fingers in everything in this town. He Owns Killer of Kings. The book gives me bits and pieces of him the further I read. I get to see him interact with his assassin’s and then with Graciella. Boss wants to protect her. There are so many facets to him that are shown in this book that you fall in love with both of them by the end. Both of them together is quite something. Trigger warning: there are topics of rape, torture and Graciella can wield a knife very well. I do recommend this book to readers who want to read a dark romance and a heroine that can kick ass.

What a totally amazing book!! These two authors are so talented!! I can&#039;t wait for the next book to come out! A definite must read!! Happy Reading!!! :)

I am in love with this couple they are amazing and explosive together made laugh and made me cry. And it hit me I think it end with Boss? Man I want more.

Readers have been waiting for this story and it didn&#039;t disappoint! Graciella had a horrific childhood and because of that, it has turned her into what she is today. She is the perfect match for Boss and even though she doesn&#039;t want him, she can&#039;t stop herself from letting him have her. Boss is trying to figure out who is responsible for the bad drugs on the street when he comes across Graciella. Two broken souls but can they heal each other? There are secrets, there&#039;s drama and some twists and turns. This is a page turner of a book and well worth waiting for! Both authors did a wonderful job.

Killer of Kings has been one of my favorite series written by these two amazing authors! Through all the books I have always wondered about Boss and when he would get his story. Sam and Stacy did an awesome job of bringing two essentially broken, but strong people together for a HEA that is fitting for two people that endured tremendous amounts of pain and suffering. Boss is filled with action, redemption, and some smokin’ love scenes. Now I am patiently waiting to see if the lovely authors will write another one!

Christmas with the Billionaire by Sam Crescent and Stacey Espino