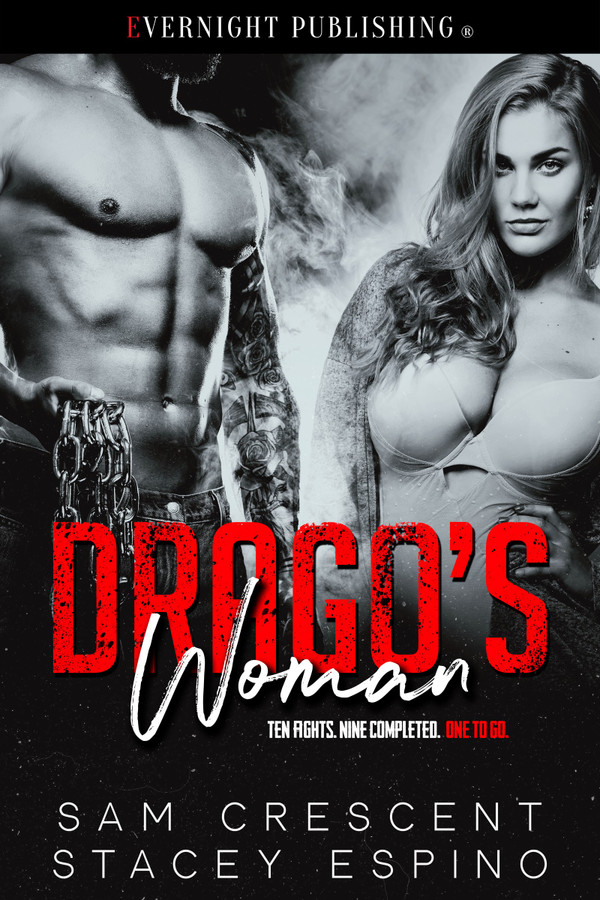 Belle is one of the best female fighters in the ring, so when she decides to walk away from the underground fighting circuit, the consequences are ugly. She has one chance to make things right. Belle has to win to get her daughter back ... only the fights are rigged.

Drago retired from fighting years ago, but his name still carries a lot of weight in the underground. When he finds Belle fighting a losing death match, he can't stand on the sidelines and watch her die. The young beauty is hard as nails and doesn't know when to quit. He intervenes and soon finds himself caught up in a life and death battle to keep her safe.

Can Drago convince Belle that love can exist in their twisted world before she risks it all?

Drago watched her eat and loved how sensual she was trying her food. His cock hardened to imagine those perfectly plump lips wrapped around his cock, taking him down. He’d love to taste her pussy and to hear her cries of pleasure to replace the screams of pain he remembered so clearly. Finishing off his steak, he sipped his glass of wine, watching her.

With no more bruises and with her hair down, dressed to perfection, she looked womanly. Her pregnancy had done wonders for her as she’d also filled out.

He noticed she wasn’t used to her hair being down either as she kept pushing it off her face, and he found it to be the cutest thing he’d seen.

“Nothing. You want dessert? I recommend the chocolate mousse. It is perfection.”

“A good idea.” He signaled the waiter, ordering them some mousse along with a few truffles.

“There truffles are good?”

“I see you’ve taken a liking to all the best things,” she said.

“I can’t go wrong. Money buys luxuries, but it is true, it doesn’t buy happiness. A family.”

“You want a family.”

“I’m starting to believe that’s what I’m looking for.” He drank the last of his wine, but didn’t pour himself another glass. He liked to keep certain habits in moderation. Alcohol was one of them. During his time in the ring, he’d seen one too many fighters go down because of turning to these habits, like popping pills to help deal with the pain.

He always dealt with the pain by resting.

The mousse and truffles arrived. Picking one up, he held it across the table. “Try.”

She went to take it from him, and he shook his head. “I don’t think so, take a bite.”

Belle rolled her eyes, but her lips went around the truffle and she moaned after taking a bite. Putting the last in his mouth, the chocolate melted on his tongue.

He handed her the mousse, and she took it, along with the spoon.

Neither of them spoke after they finished their meal. He paid the check, refusing to take anything from Belle. She fumed in the seat opposite him, and once they were done, he took her hand, leading her outside.

“How about we walk for a little bit?”

“It’s a nice night out. I’m with you. Nothing will happen to you, I promise.”

She chuckled. “I can handle myself.” She put her arm through his as they started walking away from the restaurant. “It really is a wonderful night. You’re right.” They stopped underneath a lamp, and she looked up at the stars.

Even after all these years, he found her to be the single most fascinating woman in his life. He hated that he’d lost touch with her and that he’d not taken the time to check on her. That would be something he’d regret to his death. She deserved to have someone to love her, to take care of her.

In the back of his mind, he saw her just weeks ago, in the middle of the ring, about to be killed, and he pulled her into his arms, holding her tightly to his chest. He couldn’t allow anything to happen to her. Not now, not ever.

He cupped her cheek, tilting her head back. “If I’d not been there that night, I could have lost you. I don’t want to even think about that.”

“You didn’t lose me though, Drago. I was there, and so were you. You could say fate intervened. Put us both on the same path once again.” She placed a hand on his chest. “I’m so happy that you did what you did. I didn’t want to die.”

“Forever is a really long time. What if you find someone else?”

“I think you’re trying to ignore what I’m saying to you. I’m not looking at anyone else. You’re the only one I see. The only one I want. I want you to think about this long and hard.”

“When we get Ava back, I want you to think about having me in your life permanently. I never thought I wanted kids, but I’d love the chance to be a good man to you, and a father to Ava.”

“I know, and she should have been.” He stroked his thumb across her lips, no longer hiding from the truth. He couldn’t hide, not anymore. She was far too tempting to deny himself any longer. To him, it had already felt like he’d waited a life time to finally have her in his life, and there’s no way he was going to let that happen anymore.

Belle belonged to him. He’d been fighting it long enough, no more.

Dropping his head down, he took possession of her lips.

At first, she froze. Her lips pressed firmly together, refusing to open.

Slowly, as he persisted and she didn’t push him away, he deepened the kiss. When he slid his tongue across her lips, she gasped, opening up, and he took full advantage, sliding his tongue within her mouth, and she moaned.

Sinking his fingers into her hair, he pulled her close, gripping her hip with the other. Her hands slid up his chest, circling his neck, holding him close. Walking her backward until she hit the wall, he took both of her hands, pressing them to the brick, holding her in place.

Only when he heard some whistling in the distance did he stop, realizing they were at an entrance in an alleyway, and he had her trapped against the wall and his body. He had to get control. His cock was rock hard, and he pressed it against her stomach, wanting more than anything to be inside her, to be fucking her. He was addicted to her.

“We shouldn’t be doing this?”

“You’re telling me that right now your pussy isn’t begging for my cock?”

​Belle is a female fighter in the underground MMA, one of the best but now she’s not fighting for glory. She’s in the ring to save her daughter. Drago is also a fighter, retired. He’s been smitten with Belle since she first started. When he finds out she’s fighting to the death and that her daughters being held hostage, he’s determined to help. Even if she doesn’t trust him… What a story! I love the idea of an underground MMA for a romance story. Belle is a badass woman who’s in a tough spot. She wants nothing more than to save her daughter and she’s willing to kill to get her back. Their connection is so sweet and strong. I’d do anything for my daughter so I really felt for her. Drago finds out the truth and he’s determined to help her. Of course, he’s also really attracted to her. He wants to help her find the kid because she’s innocent and because he’s falling in love with Belle. This is such a fantastic story. It’s a unique concept and lets face it there aren’t too many original stories out there anymore. A different twist on plots is like finding a needle in a haystack, well here&#039;s the exception. Drago’s Woman has it all: action, romance, love, sex, badass fights. I couldn’t stop reading! This book is a must read, for sure!

I felt this was a little different from the authors’ usually storylines. The introduction of both a male and female fighters who are both tough and tender was a great storyline. In some ways I do feel the story could have been a little more fleshed out, but overall a really great read. I’m guilty of wanting a little more, but satisfied with what I did get :)

What a totally amazing book! I just absolutely loved it and I can&#039;t wait to read the next one! A definite must read!! Happy Reading!!! :)

In the world of Underground fighting, Drago ruled. He remembers Belle from when she was younger and watching her come up in the world of underground MMA fighting. He&#039;s retired but when he hears she is in a death fight, he goes to watch. Belle has to fight to be able to get her daughter back, who has been stolen from her. When Drago finds this out, the underground world is about to be rocked to it&#039;s core. I really enjoyed this story and at times found myself tearing up. Belle doesn&#039;t trust any man so even though she is attracted to Drago, he&#039;s older and he&#039;s a man. The bad guys are still after her but can Drago keep her safe? Loved the little surprise threat towards the end. LOL All in all, this a really great story by Ms. Crescent and Ms. Espino.