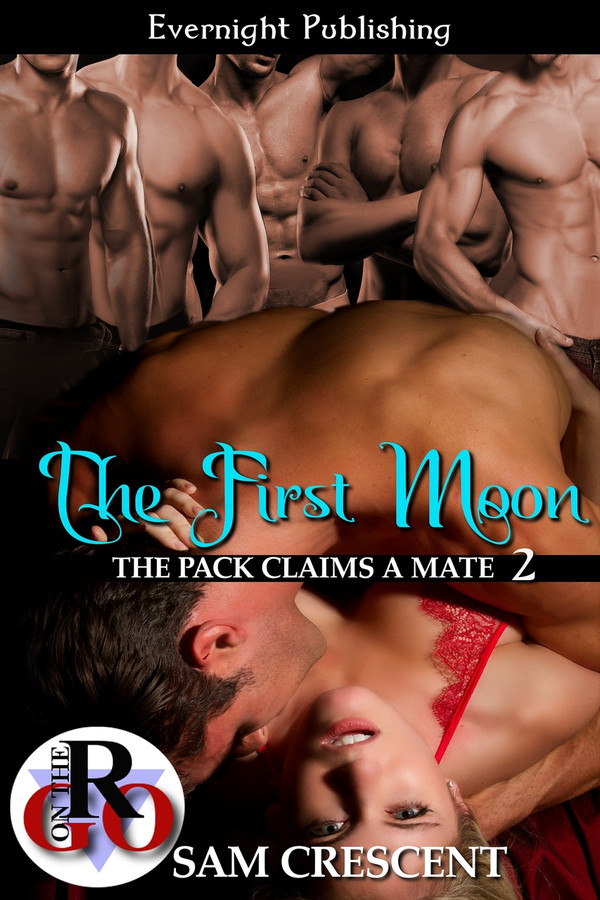 The Pack Claims a Mate, 2

The laws of the moon state each alpha must pick a mate before the age of thirty-five. If no mate has been chosen for the alpha and his pack then the beast takes control for eternity.

The claiming has started. Roy must get Kitty to trust him, to bring her back for the good of the pack.

Kitty never expected wolves to be real, let alone mating with not one but six. The brothers have all invaded her heart, and now she must give a part of herself to each. Can she survive the coming moons when all of them will walk away?

She bit her lip, staring into his eyes and knew she was completely lost forever. Why was she fighting him? What did she hope to gain by keeping herself back from him? Nothing.

“All my brothers will fall for you. They want you to be happy.”

“No,” she said, pressing her finger against his lips. “If you want me to do this then you’ve got to stop talking about them. I’ve wasted two weeks of complaining about your oldest brother. Don’t let me waste another moment complaining about anything else.” She leaned forward to press her lips against his. They were firm to the touch. If Roy took her mind away from the pain, she wouldn’t start thinking about Tom and what he did.

The scent of the forests invaded her senses as she looked at him. Her heart thumped against her chest. This was the life she’d chosen. Each of the Snow brothers was to be given a chance to mate with her, to be what she needed.

Kitty needed to realize she wasn’t in the city anymore. The dating rules no longer apply. They were werewolves for fuck’s sake.

“We’ve got two weeks left, Kitty. Give me those two weeks.”

“I’ve wasted so much time.”

He shook his head. “Then don’t let us waste another moment.” Roy took possession of her lips.

Melting against his touch, she circled his neck as one of his hands caressed up her body to hold onto her breast.

Crying out, she flung her head back as he kissed down her body. He tugged on the shirt she wore, exposing her breasts.

“Such beautiful tits,” he said.

In one quick tug, he tore at the shirt and bra she wore, leaving her naked. The fresh air breezed over her skin making it a heady experience.

“Let me take you back to the cabin,” he said.

Roy Snow has only until the next new moon to get the Snow Pack’s Mate to fall in love with him and willingly mate with him at the next moon cycle. Kitty Evans has spent two weeks of ranting over Roy’s brother Tom’s making her fall in love with him, make love to her and then walking away from her lying on the ground like discarded trash. Now Ray expected her to go through it all again with him. Time is running out for the Snow Pack. The y must each get Kitty fall in love with them individually before they can come together as a pack, but it had to be done soon or the entire pack will be lost to their beast forever. Short, sweet and to the point. Sam Cresent continues her The Pack Takes A Mate series with a very fast-paced and will leave you breathless. As always she offers a passionate story and characters that will make you sit up and take notice. You will love the bold brash men. Kitty has you empathize with her over her dilemma. Will she be strong enough to complete the mating ritual or will her emotionally battered heart have her running?

The First Moon is the second book in The Pack Claims a Mate series by Sam Crescent. This book is best read as part of the series and not as a standalone novel. This is a continuation of the story that started in the prior book. Kitty is a human and has little understanding of pack ways. She is also frustrated that the pack will not share any information as to why they are doing what they are doing with her. She fell in love with Tom and then he left her with his brother Roy, for her to fall in love with him as well. Roy is frustrated that while Kitty is his mate he cannot connect to her while she is morning the loss of Tom. The connection between Kitty and Tom is strong but less so with Roy. Roy is at a loss with how to help Kitty and complete the mating ritual he is required to. I think it would have been much better for Kitty if they could explain it fully to her. I can understand why they won’t for fear of her running away. This book is well written with a unique plot. The main characters were interesting. At thirty-six pages, this book has a well-defined beginning, middle and ending. While the ending was a bit predictable it was an interesting story to see how Roy complete his part of the mating. Overall, this was a great story.

I really enjoyed the second book in the series. I enjoyed Roy wooing Kitty and making her fall in love with him. I am anxious to read Guy&#039;s story.