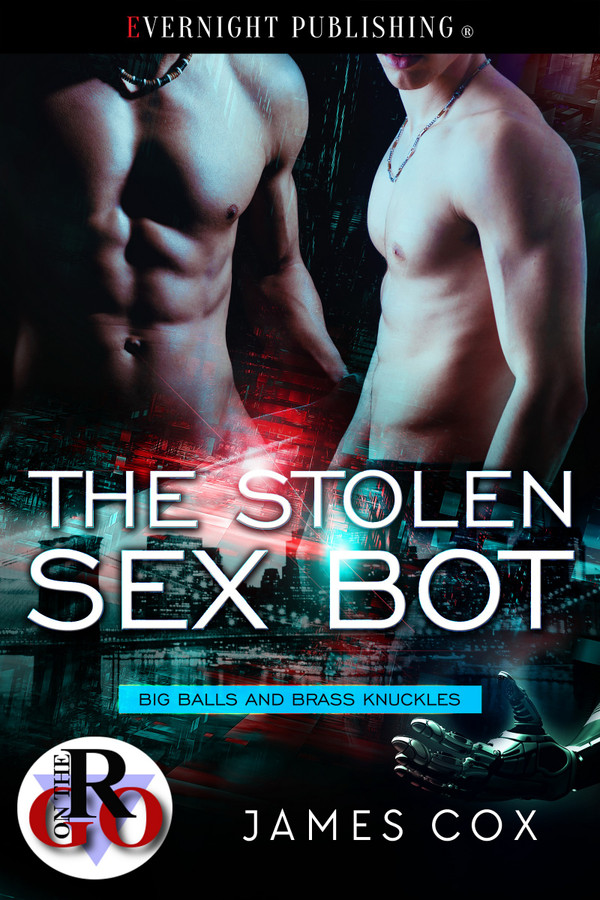 When a prominent businessman is found murdered, it's up to Detective Brett Knucks and his inventor partner, Genius, to find the killer. Things get complicated when evidence of a sex bot is found on scene. As theories dissolve, they are left scrambling for suspects. Meanwhile, Genius and Brett are trying to keep their new relationship hidden. If only they can keep their hands off each other.

“I’ll show you my office. We get naked, we fuck, and you can go back to work. You’re going to be tired and sore, but I believe in you. You’ll get the paperwork done while I take a much-needed nap.”

“Do you want romance?”

Brett didn’t answer. Instead, he touched the dashboard and clicked Genius’s address. The car pulled away from the curb and the swirling police lights.

Genius reached over, touching Brett’s thigh. “I have to remember to keep condoms on me at all times. We could have tried it in the car.”

Brett grinned. “The seats do swivel.” Genius let out a growl that went straight to Brett’s dick. That hand moved higher up his thigh, and he spun in his seat, leaning forward. They met halfway, their lips pressing together. Brett opened his mouth, enjoying the tongue lashing.

“My apartment seems so far away now,” Genius muttered as he kissed Brett’s chin.

“Doesn’t it, though?” Brett chuckled. This man was getting under his skin but in a good way. Genius was a good fuck, good company, and good for Brett at the moment. No complications. No expectations. This was just friendship and sex. He could do that. He liked doing that. It was the love stuff that was messy and complicated.

“You’ve only been in my office once. You didn’t get to see where the magic happens.” Genius sat back.

“Nope, I was busy shoving my pants on. Backwards, I might add.” He smiled at the memory. That had been a close call and almost fun.

“I can give you the grand tour some other time. When we get in that office, I’m going to be too busy taking your clothes off.”

“Ripping.” Brett stared at him. “Ripping my clothes off.” His cock was awake and pressing against his zipper. That was an uncomfortable feeling. He grabbed Genius’s shirt, pulling him in for another kiss. This one lasted a while. It turned from teasing to passion to desperation. They couldn’t get to the apartment fast enough. When the car finally stopped, Brett pulled away. His lips felt swollen, and his cock tented his pants. “How fast is that elevator?” Brett asked, hopping out of the car.

“Faster than the stairs.” Genius joined him. He waved to the doorman as they passed and made good time to the elevator.

The second the doors closed, Genius kissed him again. This time, he pushed him against the wall, trapping his body. Brett groaned, needing more. He thrust his hips, rubbing himself as much as he could. Genius slid his hands under Brett’s shirt, circling his waist and pulling him in for a hug. He must have lost track of time, because the elevator doors dinged. Brett shifted his head. “Doors are open.”

Genius grunted and stepped back. His pants had a nice bulge at the front. They walked quickly toward his apartment. He hissed when the keys jingled and held his breath when they stepped into the living room.

The apartment seemed quiet. The kitchen light was on, but the rest of the place was dark. Genius grabbed his hand and tugged him toward the door to their right. Brett stepped inside the office. He was curious about this place, though. This was a once-in-a-lifetime opportunity. This was where Genius created some of his greatest inventions. Brett’s sight was clouded by Genius, who closed the door and kissed him again.

Brett nodded. He pulled away so they could make their way to the office and then worked on the buttons of his shirt.

Genius kicked off his shoes.

Brett watched him as he dropped his shirt on the floor. He toed off his own shoes and then went to work on that torturous zipper. He peeled it down, hissing at the feeling. Brett pulled his pants and boxers down in one swoop. When he straightened, he watched Genius.

The man shoved his boxers down and stood there in just his shirt. His cock peeked out from the bottom of it like some dirty show.

Well, Brett would watch that show for hours if he could.

Loving this series by James. Fun, steamy, fast-paced reads with quirky mysteries. Love seeing the characters&#039; relationship deepen and am eager for more.

Loving this series by James. With each one, the characters are drawn closer to one another, and I can&#039;t wait to see their relationship deepen. The quirky mysteries add even more to enjoy.

Sex, Gunpowder, and Saving the Day by James Cox