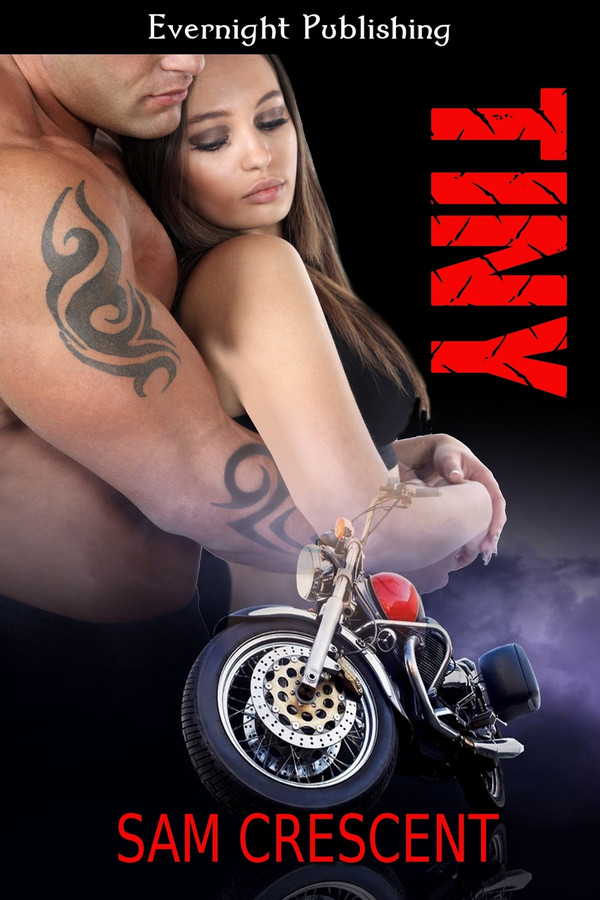 Tiny is the leader of The Skulls and the main protector of Fort Wills, but that wasn’t always the case. He has a dark past, and it’s about to come and bite him in the ass.

Eva cannot stay with a man who’ll keep her in the dark. She’s the daughter of the man who runs the underground fighting circuit in Vegas, and there is iron in her that none of the Skulls suspects. Backing down from what she wants has never been in her nature, but Tiny is too far gone. There’s no hope of holding him.

When Tiny and his boys are attacked on a drug run, he has no choice but to head to the woman he loves. Tiny doesn’t know which of his men are alive or dead. He only knows his past has finally caught up with him. But how can he go back home without his daughter’s man?

Lives will be tested, and lives will be lost. Tiny will be pushed to the breaking point, and he’ll have to make a choice. Who can he save when all seems lost?

Eva stared at him feeling the intensity of his gaze. Not once had he asked her to stay, and yet she knew it was what he wanted. They were not good for each other. The last few years had confirmed that for her. This game they played was only hurting the both of them. One of them needed to make it stop, and she was going to be the one to do it by leaving. Vegas was her safety ground. Her father would guarantee it.

If she didn’t get out of Fort Wills now then she never would. Eva knew in her heart she would let Tiny walk all over her simply to be near him. Her love of Tate was nothing compared to the feelings this man evoked within her. At times she thought she’d drown on her love for him. No man, not even Gavin, had made her feel this way.

“No, you don’t.” He took a step closer, and now she had no choice but to back away. His presence alone made her feel like jelly. She took a step back, but Tiny kept on coming. Eva finally stopped with her back against the wall. His hands rested on either side of her head. Tiny was taller than she was, even in her heels. The top of her head reached his chest, and she had no choice but to look up at him. His dark brown eyes, so like Tate’s at times, stared down at her. Where Tate’s eyes were filled with innocence Tiny’s eyes were filled with pain and power. This man knew what he was doing at all times. He had a past, and it was colorful in a bad way.

“What are you doing?” She wasn’t afraid of Tiny. He’d done everything he could to protect her over the last few months. She’d been shot and hurt because of his club. No, Tiny wouldn’t hurt her, but his enemies would.

“Nothing you don’t want.” He leaned in close. His breath fanned across her face. She smelled the mints he kept inside his drawer.

Eva kept quiet waiting for his next move. His lips brushed across hers, and she jerked back. She stopped herself from slamming her head against the wall. The small touch was like a bolt of lightning through her body. Her cunt clenched as her nipples hardened becoming attuned to this man before her. He owned her responses. There was nothing else for her to do other than let go.

I&#039;ve gotta love when an author gives me a book that is about other characters in their story. It makes me feel like I am getting to know all these people on a more personal level and it grabs me and makes me want to read all I can about them and the MC they are a part of. This is really a great series and I just love Sam Crecent&#039;s writing.

I loved this book! Sam keeps knocking them out of the park with great books!

Tiny is my new favorite book in the series! It is by far the best one yet, and that coming from someone who liked them all. Sam Crescent really came through on this one. It had it all. I loved every minute of every page. This book was about Tiny facing the ghost of his past and getting it together before he lost the woman he loved. The plot had him suffering with a lot of inner turmoil. I liked that the author gave him a sweet and romantic side to go along with the rough biker personality. It was good drama. Tiny got his day of reckoning when the past that’s been haunting him came back with a vengeance, wreaking havoc for everyone. There were some great action scenes. I also loved Eva. She ended up surprising me. As it turned out, she was a strong heroine who earned her place in his world, despite her issues and misgivings. Now for the juicy parts. As usual, Sam Crescent knows how to write awesome love scenes. I always look forward to them in her books. Those scenes were passionate and scorching hot, with lots of anal play and even some spanking. The author actually impressed me with her much improved writing in this book, as well. The grammar and editing was much improved, as was the strength of the plot compared to the last book. I was happy with everything I read here, especially how involved the entire Skulls crew ended up being in this book. Now, it’s on to Killer and Kelsey, please. Killer really stepped up in this one, so now I’m dying to see what he’s got in his own book. So drum roll, please. I absolutely loved this book. I wouldn’t change a thing. I’m giving it two thumbs up, four stars and a big recommendation.

The leader of The Skulls and protector of Fort Wills, Tiny has worked hard to overcome his dark past — a past that is about to raise its ugly head. Eva has loved Tiny for years but the time has come to for her to move on and to protect herself from the hurt of a man who won’t share his secrets or heart. One who doesn’t see her for who she is. During a drug run, Tiny and his men are ambushed. The attack was intentional and meant to wipe out The Skulls. Forced to leave his men, Tiny heads to Vegas hoping that his men heard the operative plan “failsafe” and they will find safety and regroup. Tiny doesn’t know how many of his men survived. He does know that his worst nightmare has come calling and they are hell bent on taking back Fort Wills and killing anyone associated with The Skulls in the process. The very talented pen of author Sam Crescent continues to tantalize with Tiny, the fourth book in this sinfully delightful series, The Skulls, that just seem unbelievably to get better with each new book. Right from the beginning, the author draws the reader in, seducing them into the world of dark sensuality, dangerous secrets, vengeance and sizzling hot passion with, The Skulls, a Motorcycle Club that protects and controls the town of Fort Wills and the people who live in it. Readers of this series have been teased and captivated by the often turbulent and emotional relationship between Tiny and Eva. Tiny is an alpha male through and through. He is stubborn, hot-headed, determined but there is a tender and even romantic side to him that only Eva brings out in him. He lives by a set of rules — the club, family and Eva mean everything to him and he will die protecting them. Readers will marvel at Eva’s backbone, strength and determination when it comes to Tiny but in trying to protect her heart as well. These two lovers heat up the pages, whether they are fighting or getting their kink, the reader will be savor and enjoy page after page. By using Eva’s father and his men along with the all the men and women of the Skulls as well-developed secondary characters they play an integral part to the story adding the elements of danger, willpower and compassion to the story. The danger that the Skulls face when they are ambushed and viciously attacked sets the reader on edge and will have them hard pressed not to skip to the ending to see how the roller coaster ending plays out. If you can wait, it’s worth every apprehensive minute to get the full effect and let the tightly coiled storyline pull you along.

The Skulls are a bunch of Tough as Nails motorcycle gang /family. However they have rules that they follow and even though they are bad to the bone they also have a lot of good in then especially when it comes to their Old Ladies! Tiny and Eva what a great story. I enjoyed reading about their struggle over their feelings! Add in all the chaos that is going on in their town with someone wanting revenge and you have one amazing story! Looking forward to the members stories!

I loved Eva! She was such a kick ass strong woman and stood up to Tiny. Tiny finally saw her right before she left and tried to fight for her. I think it was sweet how he kept talking to her and texting her after she left. There was a lot of action in this book and I enjoyed getting a glimpse into Killer and Kelsey&#039;s story.