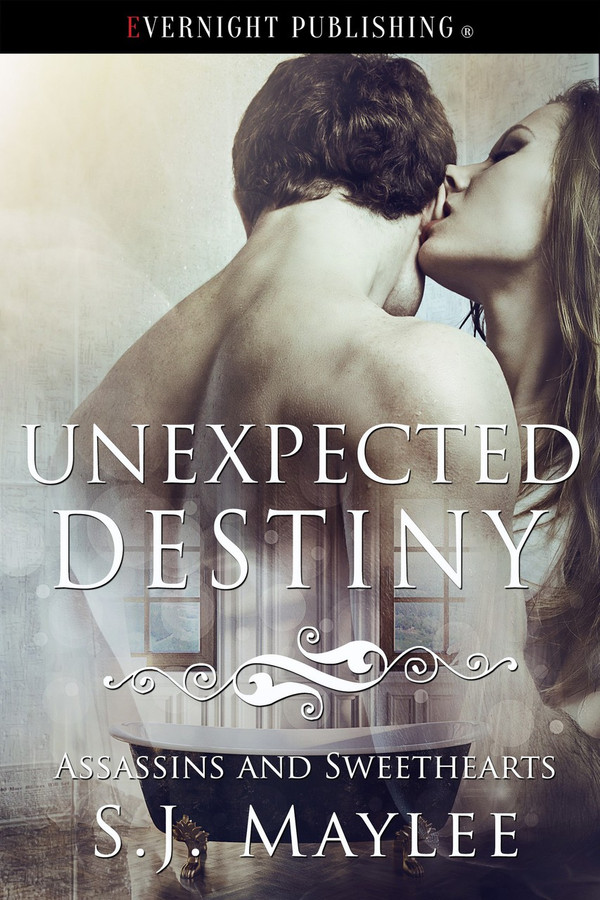 Elizabeth Martin thought she had her happily ever after, until her husband mysteriously disappeared. Aidan Clery is a skilled assassin-for-hire who wants nothing more than to find the love of his life. Fate throws Liz in his path and everything is perfect, except Aidan just won the contract on her life.

The truth surrounding Liz’s estranged husband takes the pair on a dangerous journey. Nothing in their lives will ever be the same. Destiny may be unexpected but it will be up to Aidan and Liz to discover the truth and claim their real happily ever after.

Aidan turned off the faucet and caught the reflection of those gorgeous brown eyes in the mirror.

“Oops. Wrong door,” said his girl as she turned around.

“I can share.” He could handle the surveillance later. This woman deserved his attention.

She stopped and turned around. “Okay then.” She took a step toward him. “You know what? I should have asked for confirmation earlier.” Her gaze was full of mischief.

“You’re right. You should have asked.” He took a hold of her hand and pulled her close. “I sure would like to see that tiny scrap of lace.” And just like that his night got infinitely better.

She stopped her forward movement when their chests were a mere inch apart. A nice rosy blush heated her cheeks. He kept hold of her hand while her other played with the lapel of his dark leather jacket. “I can’t believe I’m doing this.”

“You need to get back to your friends?”

“Yes, but…” She licked her bottom lip. “Maybe I could stay here for a few minutes.”

“At least a few.” He tapped the bottom of her chin. “How about you start by telling me your name?”

“Liz.” Her gaze met his and he wanted time to stop. Something about the lonely look in her eyes called to him to not let her get away. She shifted closer. “Who are you?”

He pushed his finger over her waistband, rubbing her hipbone. “I’m Aidan.” He squeezed the hand he still held. Her soft body relaxed against his.

“I should probably go. I need to get my friends home.”

“I don’t think you should go anywhere.” He brushed his nose against hers.

A delicious moan slipped from her lips. “I don’t want to leave but I need to make sure they get home safely.”

“It’s nice of you to look out for them.” Damn, she smelled good. It was lilacs or roses or something.

“I’d rather stay here with you.” She leaned in and their lips almost met. “My friends are always right. I should have gone out with them months ago.”

“More.” She scraped her teeth over her bottom lip.

A second later, the door opened. “Lizzy, we got to go. Emily isn’t feeling well.”

She dropped her head to his shoulder and he wrapped his arms around her.

“She’ll be right out,” he said. Once the friend left the bathroom, he brushed her hair behind her shoulders and stroked her back.

“You and me both, sweetheart.” He didn’t let her go.

“Well.” She looked up at him from under her long, dark lashes. “It’s not what I had in mind but would you help me with my friends?” The soft tone of her voice had him imagining how she’d purr if he made her come. “I think I might be the only one sober and they can be a bit much to wrangle into a cab. They live north in Edgewater and then we could do something, maybe go back to my place.” She worried her poor bottom lip once more.

“I’d like that.” He squeezed her ass. “Sure. I’ll help, Lizzy.” He tugged on her hair. Then he’d help himself to more of her.

Elizabeth Martin thought she had finally gotten her happily ever after when she married Reese Martin. Life was great, until one day it wasn&#039;t. Her world was turned upside down and the mystery surrounding Reese&#039;s disappearance only makes matters worse. Just when she thinks she knows up from down, she thrown another curve ball. Aidan Clery is man that knows how to stay in the shadows, which is perfect to the work he does. He knows what needs to be done, and he does it. No questions asked. The only problem he has is the growing need he has to find that special someone. He never thought the life he leads would be conducive in a relationship, but watching his friend and business partner find love has giving him some hope. Aidan&#039;s latest job puts him in the path of Liz, and after one look, one taste, he&#039;ll do anything and everything to protect her. He knows she&#039;s the one for him, even if doesn&#039;t believe he deserves her. As long as he protect her from an unknown assailant, makes sure no harm will ever come to her, he&#039;ll be to walk away, right? Unexpected Destiny is everything you would expect from SJ and more. This book is filled with a mystery that keeps the reader on the edge of their seat wondering what will happen next, will Aidan be able to keep Liz safe? Just when you think you know what to expect, you are thrown a curveball. But there is also a seductive love story that will tug at your heartstrings. The passion between Aidan and Liz is electrifying, heating up the pages leaving the reader thirsty for more. Aidan&#039;s dominance will have you weak in knees, begging for him to take you over and over again. He&#039;s a man that isn&#039;t afraid to push your limits, knowing what you need, what you desire, and able to give it all to you. I loved watching Liz evolve as the story unfolds. She&#039;s a big a shy thing in the beginning, but in the end she&#039;s a strong, independent woman that will do whatever it takes to get what she wants. I adore how she can push Aidan&#039;s buttons like no one else. She&#039;s a fiesty thing that shouldn&#039;t be trifled with. Unexpected Destiny is a thrilling, sensual, love story with a touch of mystery that you won&#039;t be able to put down. If you&#039;re looking for a book that is a perfect escape from the humdrum of everyday life, than look no further. This is a mesmerizing book in a series that just keeps getting better and better.

Untangle Me by S.J. Maylee