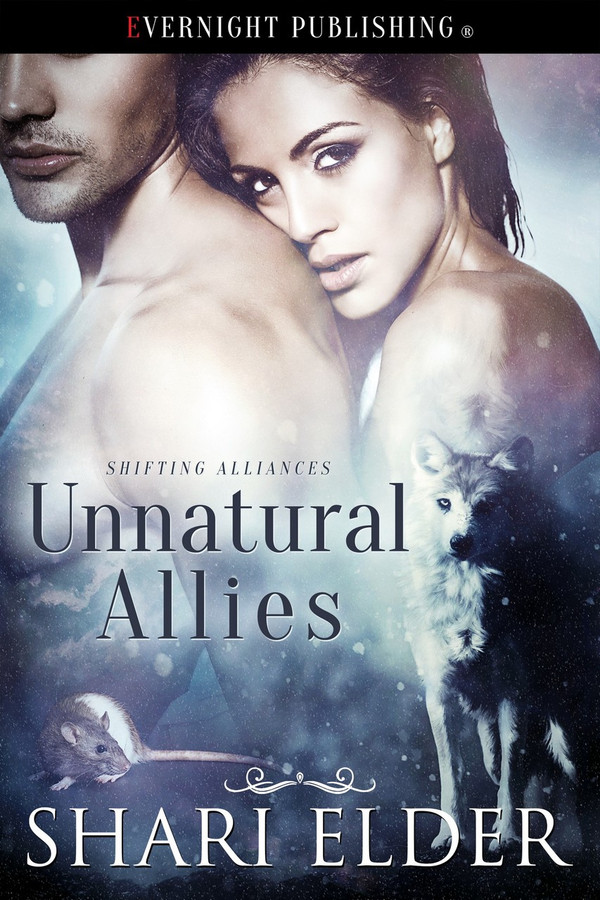 In a changing world, violent fae encroachment on shifter land makes the impossible necessary—an alliance between predator and prey.

Nicca Baron, wolf beta, balks when assigned to a mission led by Evan Grant, the rat alpha.  In different circumstances, he’d be dinner, or so her wolf keeps reminding her. But Evan proves to be a perceptive leader, a skilled fighter, and irresistible to her lonely heart.

To rule the rats, you must rule the pack. Evan is a master at managing groups—until he finds himself commanding large shifters who challenge his authority at every turn. The only bright light is calm, capable Nicca. Her succulent curves offer the perfect place for a rat to nestle.

In each other’s arms, Nicca and Evan discover new perspectives in an off-kilter world. But a wolf cannot mate with a rat, no matter the strength of the human attraction.

Evan had never seen Nicca look frightened before. Those silver eyes expanded into saucers, and they were still beautiful. He wanted to wrap her in his arms, just hold her close as they both tried to process a world spinning out of control. Even his rat wanted to comfort her.

She was getting under skin and fur.

The last leaves hung limp on the branches, resisting winter’s pull. Away from the sidhe, the air had warmed, although the sky retained a grayish winter hue. Shifter bodies held heat, keeping them comfortable in the most brutal frost. Evan burned hot from continuous movement, the too frequent adrenaline spikes, and Nicca’s nearness. Everything about her fit, like she was made for him. That agile mind, open-mindedness, those lush curves. Hell, she even spouted poetry. He yearned to put a sign around her neck—no trespassing, this woman belongs to Evan Grant.

Except for that whole wolf thing…

“Why don’t we find a comfortable place to set up camp near Fairy Falls and call it a day?” he said to get his mind back to practical things, not wishing for something he couldn’t have. He told himself he selected the location as part of the mission. All species declared the pristine, wild falls a safe zone, so they wouldn’t need the wolves or eagles to stand guard. The fact that it was the number one rated site for shifter romances had nothing to do with the selection. Nothing at all.

Race to Redemption by Shari Elder

The Elder Man by Katherine Wyvern