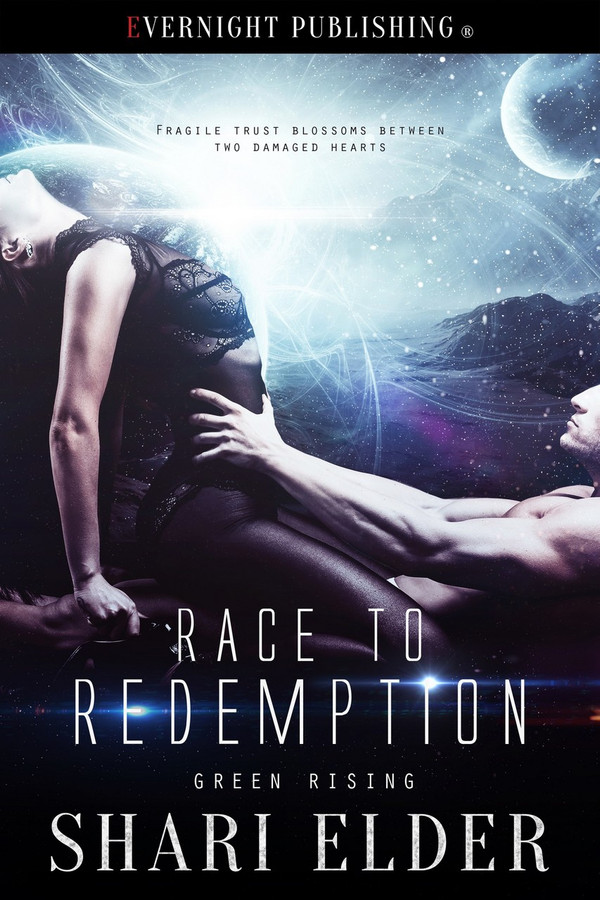 A woman who lost everything.

Intergalactic storm racing champion Elaina Carteret had it all—fame, wealth, men—until a horrific accident took it away. To get it back, she agrees to pose as Lainie Carter, medical transport pilot and corporate spy. Her risk-taking attitude infuriates Dr. Erik Johansen, who runs the medical outpost with an iron hand, a permanent scowl and the tightest bod on the planet.

A man desperate for redemption.

Unable to forgive himself for a past tragedy, Erik works himself into an early grave. He has no patience for the insubordinate Lainie Carter, who can’t take an order, disrupts routine, and flames his body to ash.

A planet at risk.

When the outpost is attacked, they're thrown together in a race across the desert to stop a deadly biogenetic weapon. As a fragile trust blossoms between two damaged hearts, their pasts resurface and threaten their growing bond.

Elaina and Fintarl transferred the meds from the craft to the supply hut. This was her last stop today. Her routes varied daily her first month on the job. Someone was either trying to ramp up her knowledge of the terrain and facilities quickly, or prevent her from finding out too much. The collections of mysteries and snippets of information she’d gathered made her head hurt. All she wanted was a bath to wash away the stink of too much desert driving and a nap to give her mind a few minutes to turn off. Fintarl’s toothy scowl warned her that wasn’t on the agenda.

She raised an eyebrow at the Ranharran and took a deep breath before heading to Erik’s office. He kept their exchanges to a minimum during her regular drop-offs at this facility. She was getting under his skin, she knew it. A meeting had to mean she pissed him off somehow. Good. It gave her another opportunity to ramp up the heat. Anger was close enough to lust to wedge open a door.

Shoulders pulled back, head high, she barged into his office. She’d always been good at bravado and she liked to keep him off balance. “Hey farm boy, you wanted me?” She flashed him a flippant smile to push the double entendre right into his face, and all she got was a grimace in return.

I’m only getting started, Dr. Johansen.

Settled on the mud blocks that passed for seats, she arced her back to offer up breasts wrapped to perfection in a tight white tank. The perspiration worked in her favor. It molded the top around her so she was as good as naked, maybe better. Her bare legs, firmed by countless hours in the gym, crossed in front to put all that toned flesh on center stage. Take a good long look, boss man.

Days of beard growth and a rumpled shirt signaled erratic hours and insufficient sleep. It seemed to have gotten worse since the last time she’d seen him. Was it only days ago? The world of secrets and hurt he dragged around on his shoulders was devouring him from the inside out. Why he avoided her when he could benefit from the physical release she offered confused her. He didn’t even have to like her to screw her. Still, he stayed away.

Erik pushed his too-long hair off his face with one hand and a package across his desk toward her with the other. The flicker of lust that darkened his eyes when she ran her hand from breast to thigh, he quickly buried. Droplets of sweat glistened along the carved muscle of his forearms. A tattoo—a yellow sphere sitting on a black line encased in a blue circle—peaked out from his shirtsleeve. Like Saskia. How odd.

“One of my better ideas, yes?”

“Ms. Carter.” Stiff formality. “On the job for a month and you’re already messing with the medical packaging? Until you show me a pharmacology degree, don’t do it again.”

“Seriously, Erik? It’s the Ranharran equivalent of string and paper. No harm done to the medicine, and I can increase the load by thirty percent. The more I move the better for everyone.”

“You’re missing the point.” He enunciated each word like it hurt to say. “The meds are volatile. Any shift, no matter how small… Damn it, Lainie, do you have any idea how dangerous this stuff is? You could get someone killed.”

“I’m trying to save lives.” Her eyes closed, she swallowed hard, trying to keep her frustration from spilling out. A raised voice wouldn’t get her very far. She already tried that. “I don’t get you, Erik. This compound is thirty miles from the Karas border. Your medical supply closet’s always running on empty, the transportation infrastructure on this planet is deteriorating and rumors that the Den Vedran Corporations are arming the Ranharran mercenaries are escalating. With unpredictable storms that can close transit corridors at any time, I’d think you’d welcome ways to move more medicine.”

His faced blanched at one point through her tirade, but was now back to its normal grim. “Not. The. Point. I won’t have my orders questioned by anyone. Without some discipline, I can’t ensure the safety of everyone under my protection. I’ll make it easy. Don’t tamper with my meds, or I’ll get a different pilot.” His lips thinned so tight they trembled. She wanted to kiss them calm after she beat him with a stick.

“You don’t want to get rid of me. Whose face would you use for target practice?” Her voice lowered, forcing him to lean closer. “And whose body would you think about when you jack off in those late hours when you’re crawling for relief?” She was guessing, but the way he struggled to suppress those flashes of longing when she got close to him convinced her she was on the mark.

“You’re trying to annoy me. Okay, it worked. No tampering, no arguments. Meeting over.” He ran his hands through his hair and pulled at the roots. His eyes looked haunted and decades older than his thirty-six years.

This was not about packaging or her rule-breaking proclivities. Whatever he kept sealed down tight was driving him to an early grave. Without thinking, she leaned over the desk and traced a finger along a blond eyebrow. He recoiled like he always did when she touched him.

“Yes, I do it to piss you off. You’re wound up so tight, farm boy, you’re going to snap.” Her finger slid down his cheek to his chin. “Let me in, Erik. I could help you reduce all that tension, but you stay so far away. So, I poke.”

She pressed her breast against his arm to make her offer clear. “No commitment required. Just two people trying to get through the long, lonely nights.”

He pulled back. “I said we’re done here.”

She swallowed her anger and flipped him a bow. “Your highness. I’ll visit Sen and Qirta before I head back to Mendasa.”

Sen’s favorite treat were hidden in a secret pocket in her bag. What Erik didn’t know wouldn’t hurt him.

In this sci fi world, Elaina is a champion storm racer. She takes a detour to a remote planet where she meets Dr Erik Johansen. Then their outpost is attacked and they must work together to stop a deadly biogenetic weapon. I do love me my sci fi. This is a perfect treat if you’re in the mood for excellent world building, sexy characters and a heartwarming story with spaceships. There are dark moments that had me rooting for the not so perfect Elaina and even the sexy but workaholic Erik is extremely likeable. I quickly found myself pulled into the story and on the edge of my seat. The world this author creates is just beautiful and complex, it really makes for a great read. I can’t believe she fit all this into a story less than two hundred pages and it feels like a long novel! The heat in this book is packed in and let me tell you, you’ll need a cold shower or a man handy while reading this book. Just look at the warnings on the book to be sure you can handle them all. I loved them! I can’t wait to read more from this author! ​ Race to Redemption is a must read, erotic sci fi!

Their Chance at Redemption by Maia Dylan