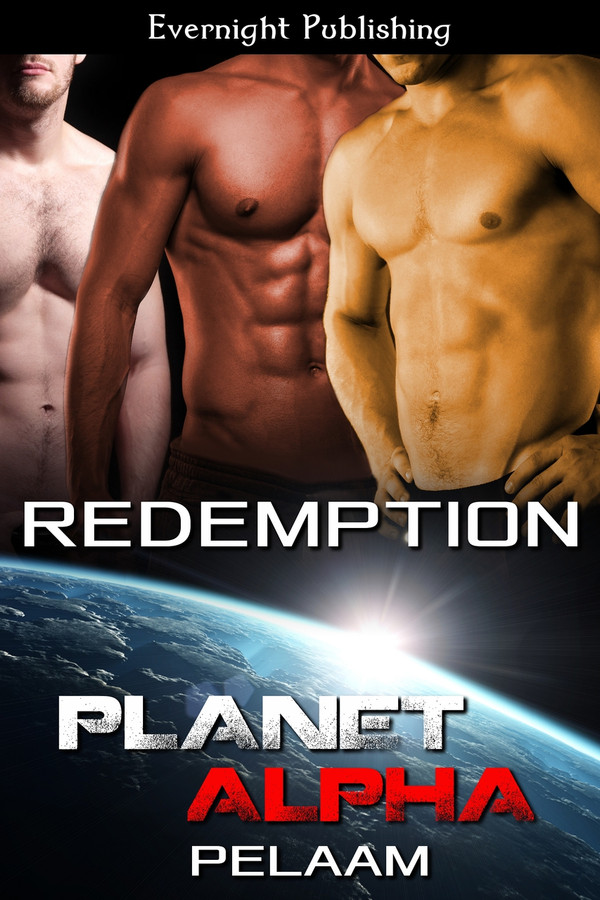 Life on planet Alpha should be an idyll for Sukh, but his soul is tormented knowing his family's standing on Xyran has dropped due to his capture. How can he be happy knowing they are suffering due to him?

Nakai finds his contented home life with his bondmates disrupted by Tokala, a rich and powerful Alphan with an agenda of his own, while Einian fears their family is breaking apart from forces he's powerless to stop.

When Sukh and Nakai fall into the clutches of an old and deadly enemy, Einian doesn't hesitate to go after them, and he doesn't care what he may have to do to save them.

Can the lovers find redemption on Xyran?

"I'm sorry to bring you from your home, Master Nakai, but there are concerns in the town with regards to the Xyran."

"His name is Sukh, and he's my bondmate. I would request that you remember this and address him accordingly." Nakai drew himself to his full height, giving him a couple of inches over Pimne.

"But of course, Master Nakai." Pimne gave a forced smile and acquiesced immediately.

This was hardly what Nakai expected. However, on seeing how quickly Pimne had backed down, Nakai decided to go on the offensive. "Giving consideration to the fact that Sukh has never come into town, except in my company, I truly wonder what concern there can be."

Trying to regain control of the situation, Pimne tried to mimic Nakai and also drew himself up tall. “Master Nakai, as town Magistrate I have to ensure all is in order within our community.”

“Of that I have no doubt, Master Pimne." Nakai inclined his head. "But I'm at a loss to know why anything should be levied against my mate, who is always at my side."

Now things made sense. At least a little. Tokala was new to the town and seemingly as determined as Pimne to consolidate a position of political power. Nakai instantly decided that Tokala was not going to use Sukh to gain status in the town.

"I see. However, it seems to me that perhaps the … issue surrounding my mate owes more to Master Tokala’s view of Xyrans, or even his political aspirations, rather than to of my fellow townspeople who have said nothing to me, your predecessor who only retired so recently, or our incumbent Mayor.”

"Master Tokala feels that to see a Xyran, unleashed, walking our streets, is distressing to our women and children."

At the furious look Nakai aimed at him, Pimne looked even less assured, and Nakai decided to press his advantage.

"Indeed? Then why have I not heard it from mates and parents? As I understand it, Master Tokala is newly settled in our town. I doubt that my bondmates and I have been in town more than twice in that time. Who is complaining to him? And why? He isn't the Magistrate. You are. Nor is he Mayor. Although I have heard rumor he intends to stand. I ask again, is this related to his, shall we say, political aspirations?"

The obvious loss of color to Pimne's cheeks told Nakai all he needed to know. It didn't surprise Nakai that Pimne probably thought of him as a country bumpkin. Since taking Sukh and Einian as his mates, there was almost no reason for Nakai to leave the comfort of his home and estate. Prior to that he either managed his estate or did his military service. He'd never made a point of being vocal in the town's political arena.

Maybe it was time that he was.

"I—I assure you, Master Nakai, that I wouldn't be party to any such—such a situation."

A deep sense of satisfaction rolled over Nakai as Pimne looked positively green. If Pimne had done his homework better, he would have realized that Nakai would be not be impressed by the Magistrate's own social status, nor would he be a pushover. Tokala may have wealth, but Nakai was quite sure that his own personal prosperity, even when not combined with that of his brothers, made him one of the wealthiest residents of the town.

He had affluence, social standing, and he was still an officer of the Alphan fleet. Nakai's request to leave the service had been met with one that he remain on active service only to be called upon in an emergency. He'd block Tokala in every way possible. He inclined his head at Pimne.

“I would be very interested to know exactly who feels the need to discuss anything of such an intimate nature with such a comparative newcomer to the town.” Nakai flicked imaginary lint from the sleeve of his jacket. “As I’m sure you’ve discovered for yourself, Master Pimne, the townsfolk take time to adjust to someone from outside. Nothing personal is meant, but we are a small and intimate town. Which naturally makes me very concerned no one has approached me. After all, I’m very well respected within our community.”

Although it wasn’t normally in Nakai’s nature to make someone feel small, he was so angry over Sukh that he fully intended to make Pimne deliberately uncomfortable. And his strategy was working.

“Let me get you some wine. I believe this is one of your own vintages.” Pimne hurried away to pour a couple of drinks.

Settling back in his chair, Nakai allowed himself a slow smile. By the time he was finished here, the Magistrate would have turned a full one hundred and eighty degrees. He’d also make certain to find out a lot more about Tokala. Some Alphans retained a dislike of Xyrans, and always would. Their worlds remained in opposition, and Xyrans were enemies, after all.

A thought struck him, and Nakai sat up a little straighter. He wasn't even certain he'd come into town with Sukh since Tokala's recent arrival in town. In fact, now that the realization had come to him, he was certain that in the last few months he and his mates had remained on the estate. The town had little to entice them to visit.

The more Nakai thought about it, the more Tokala seemed to bear careful investigation.

It has been far too long since I’ve paid a visit to Planet Alpha, and this sequel to ‘Captive’ was a great way to reconnect. Nakai, the Alphan warrior-turned-winemaker on his family estate, Einian, his human mate, and Sukh, a Xyran warrior, have managed to form a permanent relationship at the end of the previous book. But many issues remain to be resolved, and not just within the three men’s relationship. As a consequence, ‘Redemption’ is full of intrigue, surprises, adventures, cultural and other obstacles for the men to deal with, as well as a lot of loving – as often as the guys can fit it in. Einian has his hands full in this installment. He is the “glue” in the ménage in many ways, and as much reassurance as he needs, when push comes to shove, he is as strong as his two mates. Nakai has political subterfuge to deal with on Alpha, coming from a group of “purists” who want to rid Alpha of all non-Alphans using whatever methods are necessary. And Sukh battles his very nature as a Xyran warrior. He has made a lot of adjustments, but the one worry nobody can help him with is his family’s fate back on Xyran. Then their enemies unite and Sukh and Nalai end up on Xyran – as prisoners at the mercy of those who want revenge for the consequences of Sukh’s actions. What a mess! It takes all three bondmates working together to figure their way out of a pretty hopeless situation and I held my breath more than once while they fought for their lives. If you like Einian, Nakai, and Sukh from ‘Captive’ and want to see how they deal with bonded life, if you like watching triads deal with internal and external issues, and if you’re looking for a read that is as surprising and suspenseful as it is emotional and hot, not to mention a wonderful happy ending, then you will probably like this novella.

Karla’s Take: What a great book… at first it took me a little bit to get into it because there was a back story I had not read… The author did a great job in summarizing the characters and their story… These 3 men are very hot but are dealing with evil forces that have planned to tear them apart… I was able to read in short time a very well written moving story that gave you action and love all in one. I will say that this may not be everyone’s cup of tea and some might find the book out of their comfort zone… I hope you can keep an open mind when reading this book… I definitely hope that I get another installment… I give this book 3 diamonds…

A good sequel to Captive, it fills in more about the Xyrans and ties up loose ends.