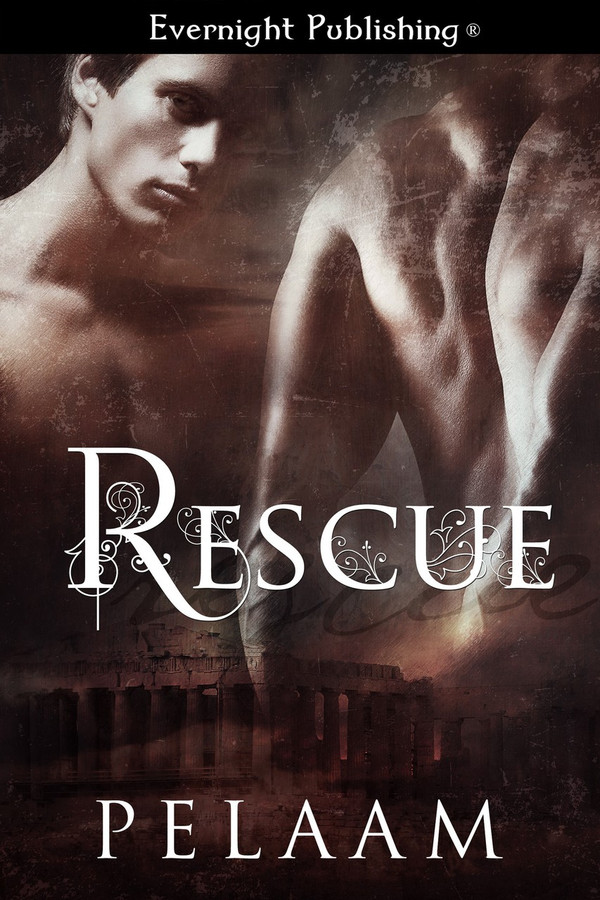 When prince Adrianus accepts a quest to find the Jewel of Darkness to break a curse on king Thanos's daughter, he takes along Fedor, a young man recently rescued from Thanos's stables.

Fedor has experienced much hardship in a short space of time. A slave in the stables of king Thanos, he's ill-treated by a sadistic captain of the guard until rescued by a royal visitor from another kingdom.

From a mix of gratitude and attraction he insists on joining Adrianus, despite the dangers involved. When he's captured as a sacrifice, he hopes his prince will come to his rescue once again.

When Adrianus finds Fedor, they realize their love, but this is only the start of their quest. Danger dogs their every step. But their deadliest danger is much closer to home than they know.

Adrianus wandered off to look around the palace stables, leaving Leonid talking with Sandor. Well bickering would be more accurate. He smiled grimly. His friends were as different in outlooks as they were appearances. He’d never known two people who disagreed on so much, got into one another’s faces so often, and yet remained such staunch friends.

Then his attention was on the animals around him. King Thanos certainly knew his horse flesh. These were some of the most magnificent beasts he had ever seen. He moved forward, patting the neck of a couple of the horses as he walked slowly. They were clearly well looked after.

Whoever works in the stable takes good care of grooming the beasts, and cleaning their stalls. His own three horses’ coats gleamed. They were fed and looked comfortable in their surroundings, despite the long ride.

A muted cry of pain drew his attention toward the recesses of the stable, and he strode quickly forward to investigate.

The voice was harsh, cold, and set Adrianus on edge. Peering around a corner, Adrianus saw a big, brutish man flick a whip over the back of a stable boy who wore only an old, tattered cloth around his waist. Even without his headdress, Adrianus recognized the man as Drakos, the captain of Thanos’s guard who’d been present when he and the others had entered the throne room.

While the stable boy was trying to move a sack of feed, clearly too heavy for his slender build, the sadistic sneer on Drakos's face told Adrianus the true story. Fury boiled over into action and Adrianus stomped over. “I see no need for using a whip on a defenseless boy. Perhaps you would care to try your luck with me?”

Drakos turned quickly, his lips drawn back in a snarl, and his whip at the ready. However, he froze when he saw Adrianus.

At the low and deadly tone of Leonid’s voice, Adrianus allowed himself a grim smile at Drakos. “Perfect timing, my friend.” He nodded at Leonid as his friend came to stand at his shoulder and then looked back at Drakos. “I’m sure that one of us will be a far more suitable challenge.” He fingered his sword.

The big man backed away a step, caught the stable boy by his upper arm, and shoved him so hard that the young man lost his footing and stumbled to fall at Adrianus’s feet. “Take him, if he’s that important to you. It’s easy enough to find any number on the streets that’ll take his place.”

The action took Adrianus by surprise. He hadn’t actually thought of the consequences. He glanced down at the young man and suppressed a gasp. The stable boy wasn’t as young as he’d thought, but he now gazed down at a face of incredible beauty. The youth’s smooth, creamy skin and lithe, elfin body made him appear young, but gazing at his face, Adrianus estimated him to be well out of his teens and much closer to his mid-twenties.

Offering a reassuring smile as the stable boy looked up at him with fear in his large, dark eyes, Adrianus held out his hand. “Come here, boy. You are no longer a stable hand.” He glanced over at Sandor, who had remained in the stable doorway.

Raising his arm, Sandor nodded. “Go with him." Adrianus pointed toward his mage. "His name is Sandor, and he’ll take care of you.” Perhaps he can serve Ruh and Sandor. But I won’t leave him here.

The youth glanced towards Sandor, back up at Adrianus, and then slowly got to his feet. His tight, tense, body language screamed his fear, but he bowed at Adrianus before he scurried off.

“King Thanos will hear of this.” The words were uttered in a deep growl. Drakos's hand hovered by his own sword, but he made no move to take it.

Waving his hand on which he wore Thanos's ring, Adrianus curled his lip. “Indeed he will. From me.” Adrianus took a step forward and glowered at Drakos. “I understand him to be a fair and just man.”

Staring at Adrianus for a moment, Drakos bared his teeth before moving cautiously around him and hurrying away.

“What are we going to do with the boy?” Leonid asked as he drew close to Adrianus. “You do realize Thanos may not let you take one of his slaves?”

“I don’t know, but if he wants me undertaking this quest, he won’t refuse me. Don’t ask me to explain it, Leonid, but I’m not leaving him here.” The idea of leaving the youth behind appalled Adrianus. Not going to happen.

“All I’ll say is that I think you’re making a mistake. The boy doesn’t belong with us. He’ll cause problems.” Leonid folded his arms as if daring Adrianus to contradict him.

I know I’m always going to enjoy a book from this author because all of them that I’ve read have been fun to read. So I wasn’t surprised that I really enjoyed this current one! Prince Adrianus is a man with a problem. His father the King is getting a little antsy about Adrianus finding a nice Princess and settling down. Only problem? Adrianus is more in the market for a Prince Charming than any Princess…. Now his father has set him up with a quest. He is to travel to a neighboring kingdom and find a mysterious two part jewel that will free the Princess of that land from an evil curse. In return, the Princess will be given to Adrianus in marriage. As you can imagine…not being into Princesses (or any woman for that matter), Adrianus is not entirely on board! Things will really get complicated when Adrianus and his two friends arrive in that other kingdom just in time for Adrianus to rescue a stunning male slave from a sadistic guard. One look and Adrianus is sunk! What follows is a tale of the adventures the cast goes through on their way to find this mysterious two part jewel. I liked it. It was well written and the world building gave me a good view of the world, without overdoing it. I liked the characters and enjoyed the read. The only thing that might be a slight negative to some readers, that I could mention, would be that all the love interests in this book are insta-love. If you can’t get by that, then move along to another book. I found them fine, and in keeping with the overall story. Speaking of the overall story, pretty much all of the resolutions were a little more easy that I would have liked as well. While there was a lot of action, with an evil mage, monsters, attempted human sacrifice…amongst other things…everything wrapped up almost too conveniently. But it was what it was… a fairly light-hearted, fun, easy to read fantasy romp, which you knew going into it would end with at least one HEA. I recommend this book to anyone who enjoys a short, fast moving fantasy novel. I believe you’ll enjoy it!