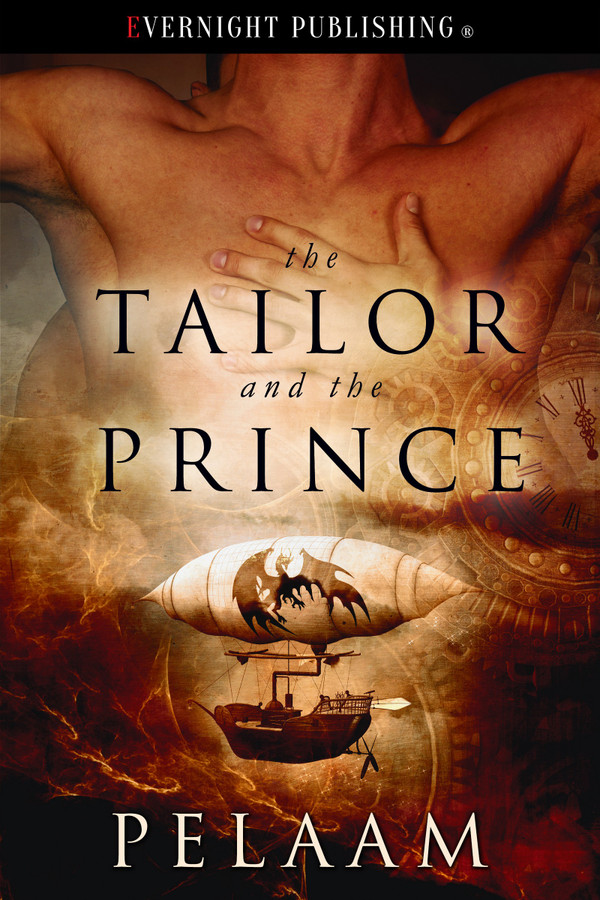 When Bertram Blackwood's father is attacked and injured, Bertie must take his father's place and travel to Japan where he hopes to obtain a contract for silk from the prince of the Kaiyo province.

But his rival, Felton Coleman, doesn't play by the rules.

Despite an attack on Bertie, and his right-hand man Tom, they still make it to the rendezvous in time to be taken to the palace.

Bertie must battle with an ancient evil if he's to save his prince.

A hubbub outside the drawing room door, caused Bertie to hurry over to see what the commotion was about. Before he reached the door, it flew open and Tom stood there. His friend looked terrible—his face ashen, and a bandage was across his brow. Bertie caught a glimpse of his mother dashing out of the front door, Tom’s mother at her side, before he focused on his friend.

“Tom! What happened?” Bertie reached out to Tom, steadying the man as his step faltered.

“We were attacked. It seemed like some … some kind of … of … I dunno, an ‘arpy, I think. I saw a woman’s face, and … and claws.” Tom closed his eyes and shuddered. “She was so ugly. Don’t worry, Bertie. Your father’s going to be just fine.”

“Come and sit here.” Bertie helped Tom to a chair and then ran to the dresser on which were several elegant decanters. Selecting one, Bertie poured a generous measure into two glasses. On returning to Tom, Bertie handed him one glass, kept the other, and perched on the edge of the chair opposite Tom. “Drink it. Brandy’s good for shock. What happened to Papa?”

“He’s still in hospital. The surgeon wanted me to stay, too, but I thought I should get back to you as quickly as possible. The surgeon looking after Master Charles had your family mage brought in, so the Master has his own protection now. Between the ring I inherited from my dad, and the medallion the Master wore, the ‘arpy couldn’t directly hurt us. So, she overturned the carriage instead.”

“Are you sure Papa is all right?” The description of the attack made Bertie’s stomach roil. He took a healthy swallow of the brandy.

“His leg’s broken, but he’s more angry than he is hurt.” Tom’s tone became a mournful as his expression. “He won’t be on that airship, now. In fact, he won’t be going to Japan at all.”

“Just what Lalleyman and Willis would want. For us to be out of the running for the contract.”

“They won’t get away with this.” Bertie stood up. “If Papa cannot go, I shall.”

“But the prince doesn’t know you.” Tom’s eyes grew wide and he rose shakily from the chair. “The Master won’t permit it.”

“Papa has no choice. I have the outfits I made, and the designs for the ballgowns, as well as men’s attire. He can give me a letter, proof of who I am. We need this contract. The silk is the best there is. And I will not allow Lalleyman and Willis to get away with this.”

“If you go, I’m going with you. I’ll not allow you to go alone.” Tom drew himself up to his full height and scowled down at Bertie.

A wave of affection, and relief, swept over Bertie. He and Tom had known one another since boyhood. Tom’s mother was cook for the household, and a close friend and confidant of Bertie’s mother. Tom had grown up as much a friend of Bertie’s as he had in service to Bertie’s family. His solidity and common-sense outlook were often invaluable to him.

“Then we must move fast to secure travel papers. You were accompanying Papa anyway, and there are two tickets. We just need to organize me. Let’s call a cab and go to the hospital. I need to talk to Papa and find out who we can call upon to assist in obtaining the correct papers to ensure I’m on that airship.”

“Then every minute counts.” Tom set down his glass. “I’ll call for a cab. The Mistress and my Ma took the cab I came here in.”

“I’ll be upstairs, packing.” Bertie set his glass beside Tom’s. “Call me the moment the cab arrives. I’ll have as much done as I can to save time.”

“Yes, sir.” Tom’s smile wasn’t as bright and heartening as usual, but it was a smile and it served to uplift Bertie’s spirits. That he’d never negotiated a contract in his life was something he’d have to deal with in due course. If he was lucky, his father would be able to pen something he could use, and he could always telegraph him for advice. It would have to do.

Charles Blackwood is the owner of Blackwood and Son which is a hand-made clothing shop that has been offered a contract by the Prince of Japan, IIchiro. He asked his son, Bertie to design the garments as he is well-known as the best designer. They are in competition with the company Lalleyman and Willis for the contract. The prince prefers their store but one of the highest courtiers, Takeshi is pushing the prince to choose their competition. Bertie is a well rounded character that is well liked by those that he meets along his journey. Both Cherry Blossom and Makoto are impressed with Bertie’s honor and become fast friends with him. In fact, Cherry Blossom makes sure that Bertie and IIchiro have as much alone time as possible. The Captain also makes sure they are not disturbed and is also considered an escort as it was improper for the prince to be alone with Bertie. Their love is sweetly done. When they finally get a chance to be alone, it’s on a hot air balloon ride. That’s when their lovemaking is more of a meeting of souls than lust. There are several other relationships going on at the same time, which allows the characters to lean on each other for support. The relationship between Cherry Blossom and Makoto is another one that should never happen. Cherry Blossom is also a male servant. As class and station mean everything, a man with no station could not have a relationship with the captain of the prince’s guard. Yet when Cherry Blossom is injured in the attack against the prince, Makoto decides that nothing else matters. I adored this story for all the different love interests, and how people are affected by their station in life. I also love anything paranormal and found all the different parts interesting and well done. The author keeps the flow of the story smooth and each character keeps in character. I could tell you more, but you’ll have to read it for yourself. Give this book a try.

I am really enjoying a lot of Pelaam’s work and if you haven’t read her stuff, you really need to. While everything may not be to your liking, she writes a little bit of everything and it’s so good. I loved this one as well. Good vs. evil. Light vs. dark. And love that has a way of triumphing over all. Bertie was excited when his father announced they were up to get the contract for silk for their store. Being a tailor and designer, he would love to get his hands on the materials and to design the best he possibly could. But his father and a servant and friend was attacked, leaving his father unable to travel to Japan. Bertie was not going to give up and went in his father’s stead. But the opposition seems to be determined to make sure Bertie does not arrive with his designs and clothes. While attacks on them continue, they are determined to get to the palace. And do. When Bertie meets Ichi, he has no idea it’s the Prince himself and the chemistry is causing a relationship between them. But they have to be careful. Ichirou could be destroyed and Bertie banned. And it doesn’t help that evil is after Ichirou, doing all it can to destroy everything. And Bertie knows he has to do all he can to protect the Prince, even if it means giving up the contract. This is a really sweet romantic story. The illusive prince, who isn’t supposed to be seen without escorts. The friends and those loyal conspiring to make sure they get together lol. There’s one character in here I particularly love so much and when you read it, I think you will find out real quick who it is and why they are so beloved. By all. It reminds of the prince and the pauper story almost. The prince and the ‘lowly’ department store worker who are falling in love but their stations hold them apart. It’s like a fairy tale and a romance all in one and I thoroughly enjoyed it. The characters, the good ones, are just amazing. A family of ‘misfits’, friends, who are loyal to the death. The bad ones are annoying, but you need some drama to make an even better story lol. But even those are written in well. I was just ready for something to happen to them. I really think you guys would enjoy this and I hope you give it a shot. It’s really good.