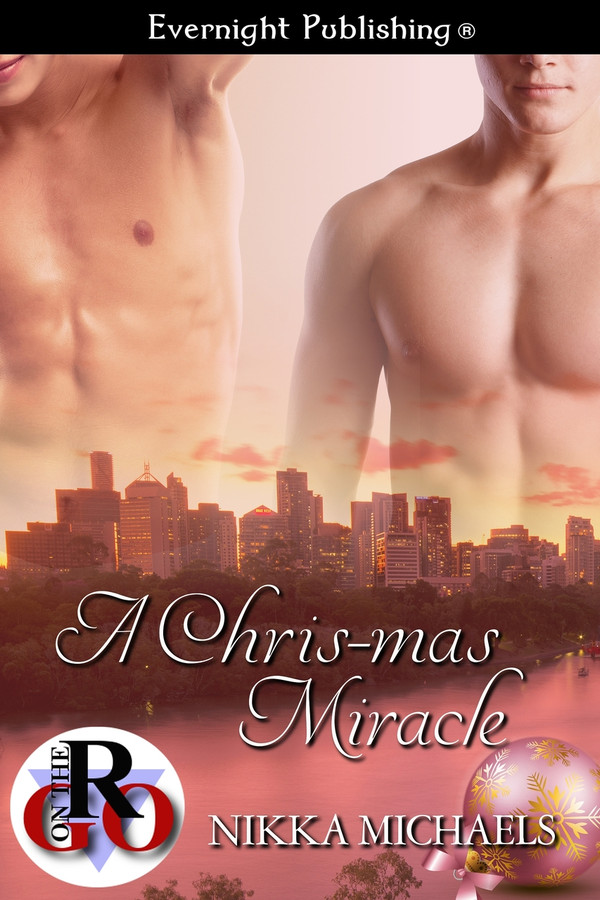 Exchange student Drew Clarke should be happy. With a once in a lifetime opportunity to travel all over Australia he shouldn’t have any worries. But when his straight roommate, who he has a crush on, kisses Drew then freaks...he's left without his only friend.

Alone during the holidays and in a foreign country, Drew finds himself lonely. When he meets surfing lifeguard, Scott, he thinks he’s found a distraction in six feet of easy on the eyes male. But when Scott wants to keep Drew in the closet, Drew’s had enough. Will his sexy friend and co-worker Chris be able to pull off a miracle for Drew and make his holiday happy?

I pushed back my sunglasses and peered up at the man standing in front of me in the sand, my eyes watering as I stared into the intense summer sunset.

“I asked if you were alright.”

When the owner of the voice blocked the sun with his body, I drew in a breath. Hello, Clubbie, I thought. As in everything Australian, the nickname for Surf Lifesavers was short and sweet.

I let my gaze slowly roam the length of the man’s tall broad-shouldered body, noting the uniform of baggy red board shorts and yellow and red long sleeved top. Tan, with a friendly smile, he had shaggy brown hair, which hung in his eyes until he raised the red baseball cap and pushed it back. This guy was every beach goer’s wet dream.

When I realized I was staring, I shut my mouth with a click, wincing when I bit my tongue.

“Yeah, sorry. I was just watching the waves.”

His friendly smile morphed into a cheeky grin. “A Yank, huh? Usually I find Japanese tourists and Danish exchange students sitting on my beach. You’re my first Yank.”

The dimples that appeared with his grin made me want to yank something all right. When he stared at me expectantly, I realized he was waiting for me to respond. I wasn’t shy, just tongue tied by the six feet plus of virile male.

He broke eye contact and skimmed the beach with a practiced sweep of his gaze. “Well, hope you have a good night, Yank. The beach is not patrolled after five o’clock so make sure you stay out of the waves, right?”

“Right,” I muttered to his back as he continued on down the beach, picking up equipment. He carried it inside the low squat building that perched above the beach and disappeared.

Maybe the next few weeks being stuck in town while everyone went home for Christmas wouldn’t be so boring.

This cute story is perfect for reading around Christmas. It was a short story that didn&#039;t seem like it! I loved Drew and Chris and I hope to read more about them in the future!

Holidays, especially Christmas, abroad can be tough enough, but spending them alone and somewhat adrift is outright scary. Drew is in just such a situation. With a roommate he had a crush on running scared and leaving, and a lifeguard who wants to stay in the closet as his recent attempts at romance, he is outright miserable. This is an angsty, sweet story full of insecurities, eye-opening events, and two main characters who almost “passed each other in the night”. Drew is an exchange student with a few months to spend in Australia before he has to return to the States. He planned to spend them traveling, but he has explored as far as he wants to go, and is suddenly lonely when he loses his roommate and friend, the one he was supposed to spend time with. Like many young men, Drew is unsure of himself and what he wants. He is also not the best judge of character…. Until he takes a second look at coworker Chris. Who could have guessed? If you like stories about young men who are still trying to figure out life, and if you’re looking for a short, somewhat angsty but ultimately sweet read, then you might like this short story.

I have yet to find anything Nikka Michaels has written that didn&#039;t captivate me right from the start. A Chris-mas Miracle is no different. The story is angsty and sweet and just the right size for this time of year, when reading time is at a premium. But dialogue is where Michaels excels. Snarky and trendy, her characters talk like guys - young guys - an unusual treat in the M/M genre. It makes them come alive right from page one. Nikka hits me in the `feels&#039; every time, but she does it subtlety. Like this little interaction between Drew and Chris: &quot;Chris?&quot; &quot;Chris is asleep, mate.&quot; I snorted. &quot;Then why is he talking to me?&quot; &quot;Well, he&#039;s had better ideas.&quot; &quot;Can&#039;t be any worse than when he&#039;s referring to himself in the third person. Can I talk to you?&quot; Chris finally rolled over on the narrow lower bunk, the metal rails squeaking in protest. &quot;Can we do this tomorrow when hopefully you&#039;ll have forgotten I opened my mouth?&quot; &quot;You&#039;d want me to forget?&quot; I just noticed as I started to post this that it says this story is 30 pages. That surprised me. It seemed like three times that. I typically do not like short stories, but A Chris-mas Miracle most definitely does not read like a short story. There&#039;s no feeling of insta-love and the ending, while satisfying, makes me hope that there is possibly more of Drew and Chris to come. If not, there needs to be. Are you listening, Nikka Michaels? Oh, I so hope you are.

Nikka Michaels tells good stories and writes good books. Nikka Michaels also has the most amazing talent for telling amazing, fully formed, short stories. Short stories frequently leave me feeling cheated. All too often it feels as if something is missing. Maybe there wasn’t enough back story, maybe the characters remained one dimensional or maybe the ending was rushed or too abrupt. Not so with this author. She manages to get it all in thirty short pages; multi-dimensional, funny and interesting characters, a believable back story, a very hot encounter and to then crown it all with a satisfying finale. I’ll be damned if I understand how she does it, but she manages it time and again. Drew was nerdy and all the more charming for it. He’d no idea he might be attractive and undervalued himself constantly, but he also had a rather silly sense of humour and a big heart. I have to admit I fell a little bit in love with Chris. When the ‘full of fun party-animal’ turned out to be a sensitive, trustworthy and loyal friend my heart melted, as did Drew’s. The dialogue in this story sparkled and Chris and Drew together were hot as hell. I couldn’t think of a better read if you’re looking for something short, sweet, funny, and hot as hell.