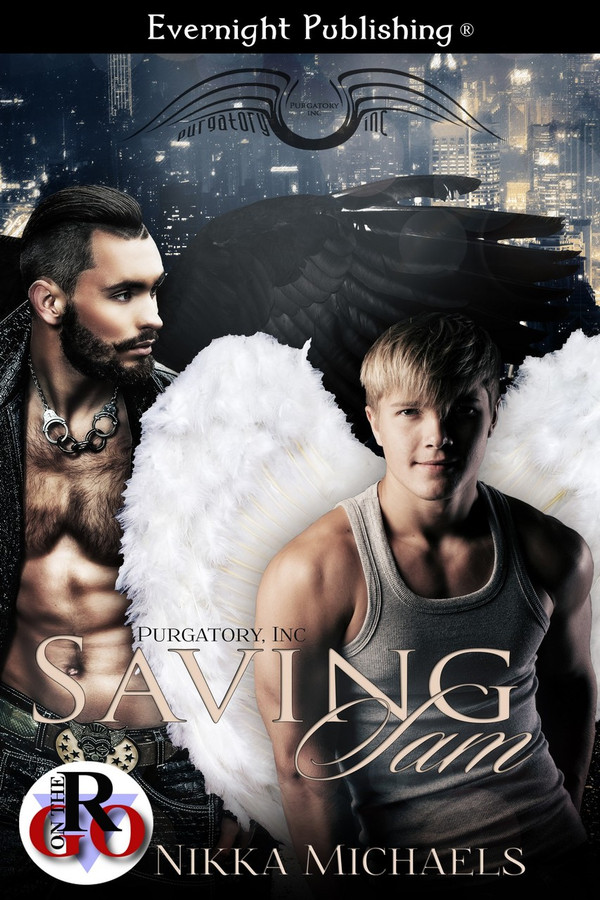 Ezekiel has been a Watcher angel for thousands of years, and now he wants a promotion to Guardian status. When he shows up for a meeting at Purgatory, Inc. Zeke gets the shock of his lifetime when his boss and Higher Power commands him to bring back Azazel, Death’s assistant.

Throw in the devil, a possible apocalypse, and a partner in archangel Sam and Zeke might get more than just his Guardian angel wings.

I looked up from my clipboard and froze. Standing in front of me, radiating divine power, was an older man with long white hair pulled back into a ponytail. He wore board shorts, a T-shirt, and flip-flops, and reading glasses hung from a chain draped around his neck. With a smile on his friendly face, he didn’t look like the higher power hundreds of religions called Heavenly Father, but more like a kindly hippie grandfather.

I pushed to my feet and promptly tripped over the length of my wings. In my most mortifying moment, God caught my arm and saved me from a face-plant onto the ugly industrial carpet. “Oh, God. Shit. Jesus.”

He chuckled and brushed me off. “Don’t worry. Not the first time I’ve heard My name. You should hear this place around Valentine’s Day.”

“As for Jesus? My Son works in accounting. You should introduce yourself sometime and bring them donuts. Nothing excites accounting like free sugar.”

He flinched at my words, and I closed my eyes, sending up a silent prayer. To where, I had no clue, as The Man was standing in front of me. At this rate he no doubt planned to bust my ass down to angelic lawn statue.

“Whoa there, partner. We’re pretty informal around here. Can I call you Zeke?”

The Supreme Being smiled and patted me on the back, and I swallowed hard.

The man snorted. “Just call me Steve.” He gave me a once-over, and I wondered if my khakis and polo shirt were workplace appropriate. “Walk with me, Zeke. Oh, and unfurl the wings a little. You’re harshing my spiritual buzz.” Without another word he turned and took off down a hallway, the sounds of his flip-flops echoing.

I hurried to catch up, cursing my clumsiness.

“As you can see, there isn’t a formal dress code while in the office. Most of the staff favor business casual so they don’t have to change before golf in the afternoon. There’s a coffeemaker in the break room. Just don’t leave empty creamer containers in the fridge without replacing them. The last guy who did that lost his head. Literally.”

“Oh, don’t worry. We found it again, but the archs get cranky when they don’t get their caffeine. How many times do I have to tell them to leave the swords at home when they’re not out in the field?”

“Yep, don’t mind them too much. They’re usually more bark than bite.”

As we walked down the hallway, I caught glimpses of beings seated at desks in cubicles. Some were speaking into headsets, some drinking coffee, and one was tossing pencils at the ceiling. It seemed just like every other office I’d ever seen on Earth. Except for the wings.

“This is the Heavenly side of the pod, by the way. Through that door over there is our counterpart. Some of the staff call them the baddies, but they’re not all bad. Except Cerebus keeps peeing on my rug. Damned dog.” He stopped in front of an office and gestured for me to enter.

“Thanks,” I mumbled as I opened the door. I stopped short with surprise, and Steve bumped into me.

Slumped on a chair in front of a large desk was a huge male of obvious celestial rank. His inky black wings fluttered, then folded, blending in with his leather jacket and black jeans. His dirty biker boots, which he’d propped on the desk, were encrusted with dirt and blood, and I swallowed down a wave of fear.

When he met my gaze, something I’d never felt before flooded my system: lust. Or disgust… possibly a mixture of the two.

The man grinned at me, a flash of white teeth against his darkly handsome features. “Oh, this is going to be good,” he purred in a low, growly voice. “Fresh meat.”

Ezekial has been a Watcher for millennia. He thinks he is being promoted to a Guardian Angel, but instead, he is sent on a mission to Earth with Archangel Sam. Sam is the archetypal bad boy, dressed head to toe in black leather, and is annoyed at being given the newest angel on the block as his partner. But even though the sparks fly between them, they must find a way to work together to stop a brewing zombie apocalypse. If they fail, they’ll be put on desk duty forever, and for an angel, forever is…forever. I found the beginning of this story a touch cutesy with heaven, purgatory and hell portrayed as a giant bureaucracy. Unless you’re offended by God being portrayed as hippie called Steve, and Satan as a gorgeous female known as Lucy (I wasn’t), the light-heartedness of this won’t trouble you too much. After this mildly inauspicious beginning, it develops into an exciting adventure story, with the experienced Sam shepherding the naïve Zeke through his new mortality. Unbeknownst to them, their talents complement each other, and they end up finishing their mission in an unexpected twist. Sam and Zeke are a perfect example of opposites attracting. Sam makes a great biker-style hottie, and Zeke is a cute preppie type, but both are caring, ethical, and brave. They spark off each other, with a lot of humorous one-liners. Their growing attraction is paced well, and the single sex scene is explicit and satisfying, if a little conveniently perfect (and has a silly reasoning, but I didn’t mind!). Although Zeke seems to lose out a little, it’s more because he didn’t really want what he thought he wanted. Which means Sam and Zeke get a nice happily ever after—they are angels after all! Overall, this is a light, enjoyable and exciting read with a sweet romance, and I liked that the angels weren’t dreadfully serious and terribly earnest, which too often happens in angel stories. I would definitely read other stories by Nikka Michaels

God was...interesting. Board shorts, cursing, jokes. I can’t say I liked this version. It just didn’t fit right. It made Him sound like a joke rather than a celestial being. So, Sam and Ezekiel are sent to earth to stop Azazel and apparently...zombies. Well, they’re more like bodies controlled by other beings. And there are star tattoos to show them how close danger is. Oh, and they can travel instantly and walk faster. It’s all kind of convenient and nothing that really made me stop and think, well that’s interesting. I did like the characters. Sam and Ezekiel had great chemistry together. The action was good but there were a lot of holes in the plot. If God and Luci are so powerful why did they set such an important task to Sam and Ezekiel? Then Ezekiel can only recharge his power with sex. That’s nothing new but it just didn’t work here. It was almost like that author needed to add sex in here somewhere so let&#039;s throw this recharge power in. And why would sex power him? There were many holes in the plot. It was still an entertaining read. I might read the second book in this series.

I enjoyed the hell out of this book. (I swear - that&#039;ll be the only pun I use.) To begin with, I drooled over the cover. A smoking hot dude and an adorably sweet looking guy with wings? Yes, please. Judging a book by it&#039;s cover - come on - we all do it - I assumed which one was Sam and which one needed saving. I couldn&#039;t have been more wrong about the characters or the storyline. The moment God appeared as a hippy (&quot;Just call me Steve.&quot;), I realized: this is why they say not to do that judgy-thing. Nikka Michaels&#039; snarky wit shines through in every sentence. This book had me laughing and highlighting passages left and right. The quick, clever dialog - especially whenever God was in the room - left me snickering time and time again. Even when God (Steve) and his Archangel (Sam) are discussing how to take on some badass evildoers, they don&#039;t lose their sense of humor - it is heaven - or Purgatory, Inc., after all. &quot;Let me be frank.&quot; &quot;Can I still be Sam?&quot; When my precious little Watcher angel, Zeke needs some Divine intervention and looks to the sky and asks, &quot;Are you there, Steve? It&#039;s me, Zeke,&quot; I thought I&#039;d wet myself. Anyone who&#039;s read &quot;Are you there, God? It&#039;s me, Margaret,&quot; will get the reference. There is A/A sex (Angel/Angel) and, if you&#039;ve read anything Nikka Michaels has written before, I don&#039;t need to tell you the sex is well-written and hot as hell. (That&#039;s not a heaven/hell pun - that&#039;s just the truth.) The description of fluttering wings added a whole new visual that made me think I only want to read about angels from now on.... The only thing I didn&#039;t like about Saving Sam was the length. I wanted it to be much, much longer (that&#039;s what she said). So sue me. I couldn&#039;t&#039; resist that pun and in this case, it&#039;s appropriate on so many levels.

I think I may have mentioned in previous posts about Nikka Michael’s books how much I love her words. Her imagination never ceases to amaze me. She creates a world for her characters and plants me slap bang in the middle of it as soon as I’ve read the first few opening paragraphs. The sensation of being transported to a different realm was a bit stronger in Saving Sam than it has been in Michael’s contemporary stories. Purgatory was a real place within moments after I started this book and the story and characters dragged me into its depths instantly. I could happily believe in a God who wants to be called Steve and says things like: “Walk with me, Zeke. Oh, and unfurl the wings a little. You’re harshing my spiritual buzz.” I adored Zeke and Sam and loved how Michaels turned their roles completely around. We may think Sam is the experienced, bad ass archangel, as the title suggests things aren’t quite that simple and we soon learn sweet innocent Sam is indeed a force to be reckoned with. Of course, if Divine powers and sexy angels aren’t enough to entice you, there are zombies (or Deadies) to keep you occupied. And that’s before I even mention the rather hot angel sex. Summarising, this is an exciting, entertaining, hot and ultimately sweet short story. I’m always eager for more books by this author. This time I’m also curious about the other Purgatory Inc. stories. Bring it on.