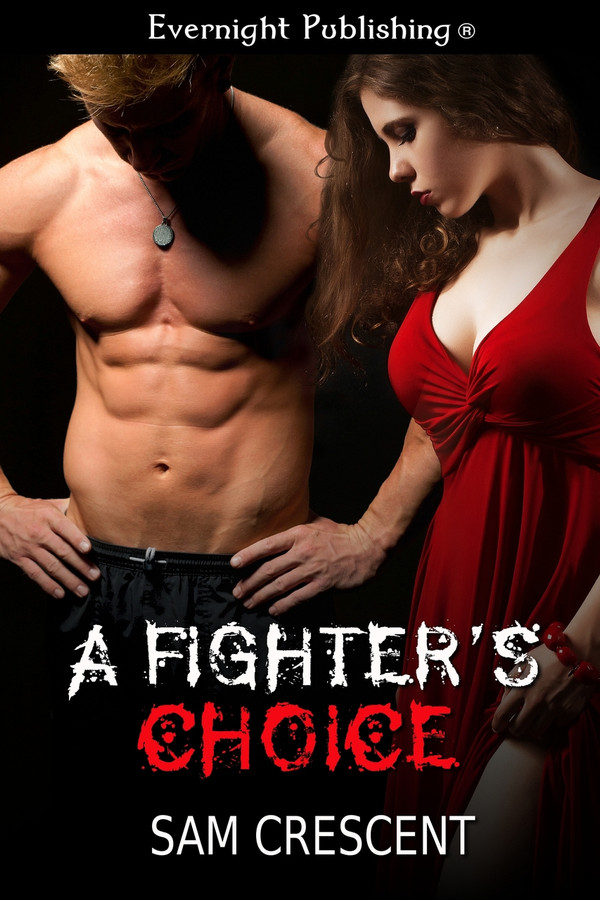 Jasper is filled with violence, and the only way to unleash it is to make money in illegal fights. Ever since he left home he’s been fighting and saving his money, living a simple life of pain and sex. His life is fine until he notices her living across the hall.

Amber spent most of her life in foster care. She knows how to take care of herself and is prepared to do anything to keep herself alive. Working as a waitress in a strip club was not something she wanted to do, but it pays enough to live on. She notices the man across the hall, but he is obviously bad news with all of his bruises.

One chance meeting turns into another. Jasper can’t keep his hands off her, and Amber doesn’t want to fight the lust. Together they surprise each other with their need and feelings. However, Jasper’s gotten noticed in the ring, and now he has to pay the price.

He has to make a choice: go deeper into the fighting world and run the risk of losing his life and Amber, or run with his woman and find love, life, and happiness.

“No. Stripping my clothes off for a man who doesn’t respect me has never appealed. Some of the women love it, and others do it because they have to. I’m not in any desperate need to be noticed by men.” She opened the sterile wipes and started to work on his face. He released a wince as the wipe glided over his cut. “Sorry.”

He didn’t say anything as she finished dressing the cut on his eye and placing a plaster over it.

“You need respect to fuck?”

She smiled. “To a point, yeah. I’ve got to know the man sees me as more than a whore or someone who’s paid to do a job. I don’t know. It makes sense in my head.”

“Good, at least that makes one of us.” She moved onto his other cuts. When she was finished, she pressed her palm to his bruised cheek. “I’ve got nothing for the bruise. I wouldn’t go out fighting for a couple of days. Your face needs to heal, and if you keep splitting it open, it’s not going to heal.” She grabbed the bowl and walked it into his kitchen.

“Were you a nurse or something?” he asked.

“Nope, I read a book on first aid. Believe me, when I saw the cost of insurance and medical bills, I figured a few hundred dollars in medical books would save me a hell of a lot more over the years.” She’d burned herself a few months back, and with the book she was able to treat her own burn, which was a mild one. The thought of dealing with medical bills made her feel sick. She made good money but not enough to go wasting it on crap.

She threw the water down the drain and started to wash the bowl. His hands went to her waist as she was standing at his sink. Amber tensed, floored by the flood of arousal working around her body.

Dropping the bowl into the sink, she heard it smash. She made to turn around, but Jasper wouldn’t let her. He held onto her waist tightly keeping her facing the sink.

She licked her suddenly dry lips. “What are you doing?” she asked.

The heat of him surrounded her back. She didn’t know what to make of this sudden change within him.

Her hair was moved aside, and she felt his lips against her neck, kissing her.

One of his hands moved to her stomach. The arousal intensified as his fingers moved downward to the start of her shorts. She was breathing hard, wondering what she should do.

He was a fighter, and she worked in a strip club.

Jasper kissed her neck, sucking on her pulse. She closed her eyes, biting into her lip to try to contain the moan.

“Why? You’re not with anyone, and neither am I. This is more than okay. It’s meant to be.”

She couldn’t argue. The way he brought her body to life, Amber couldn’t think of a single argument to put up. Keeping her eyes closed, she rested her head against his shoulder, letting herself go.

Jasper thought he had all he needed in life; a good fight and all the groupies. For a year, glimpses of his neighbor intrigued him, and meeting her ensnared him. Amber looked at her scary neighbor who always has a bruised face and she thinks &quot;danger&quot;. A chance meeting proves to her there is more behind the bruised face; a loving man. Love soon follows, but they will be put to the test when a man out of the shadows begins to visit Amber&#039;s place of work. When Jasper discovers the truth, will he be able to leave everything behind for the woman he loves? Ms. Crescent writes in intriguing story with an ending no one could ever see coming. I found the characters to be interesting and together it is wonderful to experience two people learn to love. The writing of Ms. Crescent never fails to tantalize and suck the reader in. I enjoyed A Fighter’s Choice and recommend it to the romantic at heart. - See more at: http://www.coffeetimeromance.com/BookReviews/afighterschoicebysamcrescent.html#.VMVpdv54p7l

I enjoyed this book. Makes me wish I hadn&#039;t read it so I could read it again!

Loved this book by Sam Crescent! It was adorable! I loved how Jasper didn&#039;t want to feel anything for Amber, but being in her presence he started catching feelings for her hard. Amber was so funny! The Stuff that came out of that girls mouth...Lol :) Love the chemistry between the two, and hope I see more of them in the future!

loved the story. the best she&#039;s done in a while, read every word.

I really enjoyed this story. The interplay between H/H was laugh out loud funny ans engaging, the plot was a new and engaging. I found it to be a quick read, with good dialog, smoking hot scenes and unique story line between two people who deviate from the norm in physical appearance as well as their views. Wish it had been longer.

Really enjoyed this book. Jasper is a tough fighter who takes no crap. He was the perfect alpha male bad a$$ and very protective and possessive (just how I like them to be). Amber was perfect for him, she wasn&#039;t afraid to speak her mind. Overall an excellent read. Sam Crescent never disappoints me. I love her books.

review is from: A Fighter&#039;s Choice (Kindle Edition) I really enjoyed this book. Both characters are uniquely different but very enjoyable to read about. This book has a great blend of romance, humor and action!

Once Again Sam Crescent has us falling in love with a Ultimate Alpha Male in Jasper. Jasper is a underground fighter and Amber is working in a Strip club just trying to get by and live her life. Jasper and Amber are neighbors for the past year and never really talked. One day they see each other outside of their apartment and the Sparks and chemistry is undeniable. Feelings develop and you love to see where their relationship goes and hoping their is definitely a HEA. If you are looking for a book you can read in one sitting and come away with a smile on your face this is definitely one you want to read.