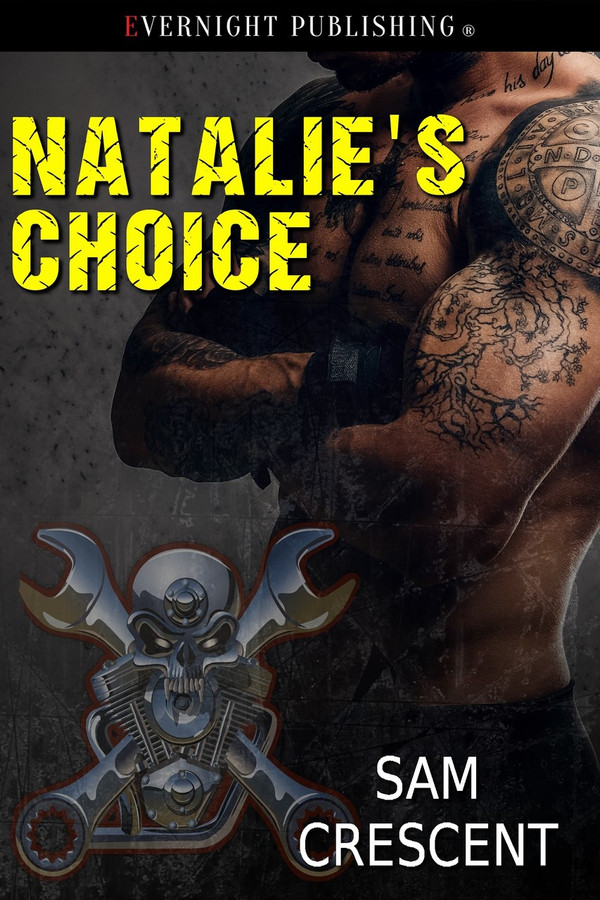 Natalie Pritchard doesn’t want to come between the men of Chaos Bleeds. So when Slash and Butler both try to compete for her, she’s not having any of it, and steps away from them.

Slash is pissed. He’s wanted Natalie from the first moment he saw her, and he knows that Butler only wants her because he can’t have someone else. There’s no way Slash is going to lose the only woman he’s ever loved, especially when he’s not even gotten her yet.

When Natalie goes on a date with an old friend, Slash is tempted to follow her, but decides against it. When they get a call to say Natalie’s been badly beaten, Slash knows he’s wasted enough time. He should have been there.

Waking up to see Slash there, Natalie is brought back to the first time she saw him, how he made her heart flutter, and the crush that thrived before her father died.

Will Slash finally be able to woo his woman, and to have the family he’s been craving? Will they get their happily ever after?

Finishing the final sketches, she found Slash still in the kitchen. She paused once again as he had an old fridge, which he was pulling out of the door.

He looked … hot. Not just warm hot either. No, she was starting to really like a man with muscles. They caught her eye every single time.

“What’s up, babe?” he asked, coming back into the kitchen.

She handed him the book and waited as he looked over every single page. He didn’t say anything for the longest time, and after he’d finished the last page, she was nervous. Did he like it?

“I need to get my act together, and make this shit real, don’t I?”

She gave a little squeal, and threw herself into his arms. Her ribs were all fixed up, but that didn’t matter, Slash was always careful with her.

He gave her a little twirl, and she wrapped her arms around his neck.

Staring into his eyes, Natalie felt herself falling. Her body catching alight as he held her so tightly.

Neither of them spoke, and his breath fanned her face, making her think of his lips on hers. She’d not been able to enjoy his last kiss, but everything was different now.

Slowly, he leaned in close, and she was so sure his lips would touch hers, but they didn’t. Someone cleared their throat, and Slash pulled away.

Tugging down the edge of her shirt where it had rolled up, she looked up to see Dick. “Interrupting something?”

“I fuck often, but the workers need refreshments, and I’ve been asked to obtain them.”

“I’ll go and grab some sodas.”

She left the kitchen, heading outside to the cooler that she and Slash packed with food so they could work and eat on the job.

“Ignore him,” Slash said, following her out.

“He’s such a dick at times.” She covered her mouth, and gasped. “I can’t believe I said that.”

“You’re not the first woman to think it, and with Dick’s track record, you won’t be the last.”

“It doesn’t make it right.”

“I’ve often wondered about him. The guys sent him because he was pissing them off. That’s his talent.”

She reached into the cooler, but Slash stopped her, grabbing hold of her arm and tugging her close.

There was a time she’d have been so pissed off by his manhandling, but right then a thrill went down her spine.

“Every single time you look at me, Nat, it’s like you’re begging for my lips on you.”

In response she licked her own, and heard him groan.

“You have no idea what you’re doing to me.”

She couldn’t resist though.

Slash pressed her against the side of the car, and his hardened cock rubbed against her stomach. “That’s what you do to me.”

Natalie was a virgin. She’d not been with anyone else.

Being the tomboy, the little ranch worker, there hadn’t been much time for her to experience stuff like that, nor had she wanted to.

His fingers cupped her neck with his thumbs underneath her chin tilting her head back so that she looked at him.

“You’re the most beautiful woman in the world,” he said.

“You’re the most beautiful woman in my world, Nat. I love looking at you, I love being around you.” His thumb stroked across her lip. “And if you gave me a chance, I could show you a life that you’ve only ever dreamed about. I could be your everything.”

I Voluntarily reviewed a copy of this book Natalie&#039;s father passed away, but she wanted nothing to do with the farm he left behind. She was a designer and that&#039;s what she wanted to do. Now the Chaos Bleed MC was helping her out and looking after the farm. And that&#039;s how she got to know Slash and Butler. Both men are trying to get her attention, but Natalie is not coming between two brothers. Even though she already knows who she wants. So she decides to go on a date with an old friend, but that turns out to be her biggest mistake she ever made. Things does not go well for her when she ends up badly beaten and then Slash finally steps up and claims his women, Butler be damned. I Enjoyed this one, I think more for the fact that I got to check in with the rest of the couples. And also see how Simon and Tabitha is coming along. Slash was everything we would expect from out Chaos Bleed Bikers. But he was also the soft hearted biker when it comes to his women. I really need Simon and Tabitha&#039;s book and that one is going to be EPIC!

HOT, HOT.... Love this series. Another awesome great book by Sam Crescent. I can&#039;t wait until the next book comes out.

Reading a Chaos Bleeds MC book is like slipping on your favorite houseshoes ... you sigh contentedly, close your eyes and smile.

Seems to me that in this book the very intimate details of the sexual encounters have gotten vague. I enjoyed the story very much but would have liked more descriptive details on their love life. Seemed cut short for this book.

I so love you Sam crescent you made my time reading this book a wonderful journey. It was great reading as always. Chaos, skulls fan forever!

Once again Sam Crescent has done it!! I would totally recommend this book it well beyond my expectations and I can&#039;t wait for the next book because I absolutely love the Chaos Bleeds MC!!!!!

So great to be bought back into the world of Chaos Bleeds!!! This story was great, it also gave you glimpses of old friends and some of idea of things that might be to come. Loved this so much!!

Thank You Miss Sam Crescent For Another Chaos Bleeds Love Story! I&#039;ve Enjoyed Slash&amp;Natalie&#039;s Story Very Much, You&#039;ve Covered Everything, Sex, Love, Laughter, I Cannot Wait For The Next Chaos Bleeds, Until Next Time, I Give This Book 5 Stars⭐

Book Ten into Chaos Bleeds and what another incredible story. Natalie is a young woman who won’t get in between club brothers but when your heart points to one you can’t help want what the heart wants. Slash &amp; Butler both are drawn to Natalie but Slash is the one that has always wanted her heart. You will see how a club comes together to be a family and all you can say is you can’t wait for more

I loved that we read about both clubs and how they were all changing things. Family is love. Loved this love story for Slash and Nat. Ready for the next ones. Simon’s will be something.

First of all, I freakn adore Devil. That man... *insert dreamy sigh* Each book is worth 10 stars, just because he is in it. Now I wish to reread Devils book so much again. Anyway, let&#039;s pay attention to the main couple. At the beginning, I was a bit confused about which guy Natalie is crazy about. Slash or Butler? It seemed she has only friendly feelings for both of them. Then you start to think about these little give aways. But are they &#039;give aways&#039;? Or just your wishing? Slash was.... Well, he was cute when he was useless with compliments to Natalie. Lol. And irritating. He let go few good opportunities to step up their relationship. What he was waiting for? A kick in the as.... *cough* I mean a good push? Then again, Natalies date with another guy and what happened on that date, it was what he needed to step up his game. When he finally was in, he was in, and Slash was amazing. And I&#039;m glad that what happened to Natalie, wasn&#039;t just another enemy popping up. I think Chaos Bleeds needs a bit of piece time, after all the action they had in last years. And talking about Chaos Bleeds, I was glad to meet the old couples. &#039;Meeting&#039; them again, makes me wish to read theirs journey again.

A Fighter's Choice by Sam Crescent