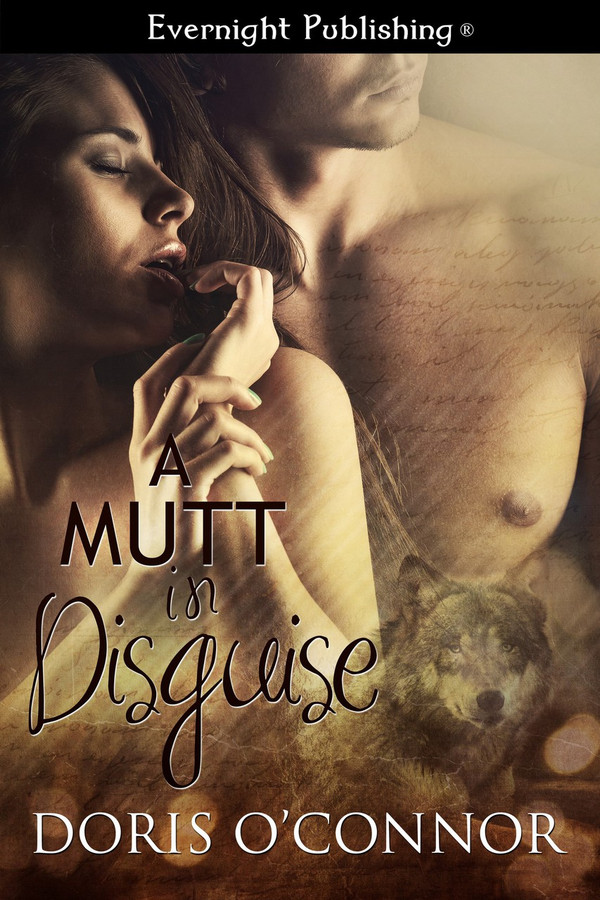 Love knows no boundaries—or does it?

When Anja is abandoned by her nightmare of a so-called boyfriend, she relies on Mutt to escort her safely home from the homeless shelter she volunteers at. Her canine friend proves to be an excellent listener. If only she could keep the wolf-like dog, but confining him to be a mere pet would be downright cruel.

Ethan knows he should keep his distance, especially after the night they shared. Humans can’t be trusted, but Anja smashes through all of his emotional defenses, and his wolf scents his mate.

However, Ethan is in disguise for a reason, and he needs to see this through. Will Anja accept the man he truly is, as easily as she did Mutt?

The blood rushed in her ears, her pussy ached, and her heartbeat galloped. What was it about him that made her react to the simplest touch with a rush of wet heat between her thighs? If he hadn't pulled away, she would have let him take her standing up. Hell, she had been all but ready to have him balls deep inside her in Mary's office. And since when had she been so vocal about her feelings?

And he, the blasted man, wolf, dog, whatever the fuck he was, just stood there and smiled at her again. Oh, he was affected all right. The rigid bulge in his groin and his rapid breathing were testimony enough, but she sensed that he held himself in tight control. Here she was falling to pieces and he just bloody stood there.

"Oh, for heaven's sake say something. Or fuck me, either or, just do something."

Ethan laughed, a big deep belly laugh that shook the floorboards and rumbled through her. Damn insufferable man. She stuck her tongue out at him and pouted.

"What does a girl have to do to get fucked around here?" She slapped her hand on her mouth in horror at what had just tumbled out of her mouth, and Ethan sobered. All traces of teasing gone, he stalked towards her with all the intensity of a predator stalking his prey. All the breath left her lungs when he grabbed her around the waist and flung her over his shoulder. The swat to her ass stung, even as he soothed the hurt away with his hand and chuckled.

He didn't answer, just smacked her butt cheeks a few more times, each one harder than the one before, until her ass was on fire. Tingles of sensation spread to her clit, and she lay panting over his shoulder, so aroused she thought she might come on the spot if he swatted her again.

A few more long-legged strides found them in her bedroom, and the world flew by at dizzying speeds as he flung her on the bed. Before she even stopped bouncing, he was on top of her, trapping her to the bed with his sheer bulk, pinning her to the mattress, his wolf's deep growl trembling through her. By rights she should have been terrified, but God help her, if she got any wetter she would disgrace herself, and he clearly knew that. He smiled, showing Mutt's teeth, and sniffed her neck. His scent intensified, and she struggled underneath him—not to get away, but to get closer.

"Please ... please." She didn't even know what she was begging for exactly, but he lifted himself off her slightly. Propped up on his elbows, he studied her, once again just a man, and her breathing hitched under his silent scrutiny.

When he finally spoke, his voice was a low, growly whisper, and she clenched her thighs as much as she could, held immobile as she was, to relieve the ache in her clit. "Please what, baby?"

He smiled and lifted one hand into her vision. As she watched in stunned fascination his nails changed into menacing claws. He traced his clawed index finger along the side of her jaw, over her lips, and along her throat. That claw traced a trail of heated awareness over her collarbone until he hooked it into the top of her jumper. With a wicked smile and a flick of his hand the fabric ripped and fell away, exposing her to his hungry gaze.

Goosebumps broke out over her exposed flesh, and she shivered when he ran that claw over her breasts. Her nipples tightened and strained against the lace as he circled each. He dug in and ripped the delicate fabric there, too.

"Beautiful." He murmured the words into her skin, and she gasped at the first touch of his rough tongue over the sensitized peaks. He rolled his tongue around her nipple and bit down slightly. The sharp pain spiraled down towards her pussy, and she gasped her arousal. He smiled against her belly as he licked a trail of need over the sensitive skin of her quivering tummy while he used one hand to keep her arms pinned above her head. The other one kneaded and pinched the previously neglected nipple. He shifted slightly, and her freed hips bucked off the bed when he cupped her mound through the fabric of her jeans. He smiled at her, and her stomach flip-flopped in delicious anticipation. He hooked one of her legs over his shoulder and lowered his head. He inhaled deeply against her still-clothed mound, and Anja shut her eyes at the myriad of sensations assaulting her.

"You're so wet for me, baby, your jeans are stained here. Do you have any idea what a fucking turn-on that is? I want to do this slow, but heaven help me, I can't."

When her scumbag of a boyfriend abandons her at the homeless shelter where she volunteers, Anja must rely on Mutt, a canine who has been hanging around the shelter to escort her home. Mutt proves to be a loyal friend and a good listener, almost as if he can understand everything she tells him. When Anja wakes after a night filled with passionate dreams, she finds herself confused and questioning her sanity. Wolf shifter Mutt is really businessman Ethan Montagu who has been hiding for a reason. Wolf and man have a hard time trusting but there is something good and kind about Anja that breaks through the barriers and touches the heart and soul of both man and beast. Ethan is going to have to come clean and hope that Anja can accept the man and all his secrets. The ever entertaining and always delightful author Doris O’Connor gives readers a sweet story to savor. It seems like no matter what genre this writer really knows how to successfully combine action, romance and drama with memorable characters for an intriguing and outstanding story. In A Mutt in Disguise the plot progresses at just the right pace, creating an emotional picture that seems to whisk the reader away to a place where love blossoms and anything is possible. Anja is a sweet, brave and caring woman who really wants to make a difference with a project she holds dear to her heart, the homeless shelter that she volunteers. She spends quite a lot of her time and she is planning on donating her inheritance to the shelter where the money could be greatly used. Ethan too is trying to make a difference and help people although after being burned by humans, trust doesn’t come easily. Watching Anja break through the emotional barriers that surround his heart emotionally intense and will have the reader sighing out loud. The atory is laced with tension and sexual heat, the chemistry between Anja and Ethan is palpable and tumultuous. Anja and Ethan are well-matched characters who deserve a happily ever after with each other.

This was a cute short story just in time for the holidays…. Make sure you read it and I hope it gets you into a giving mood in more ways than one… I enjoyed Anja and Ethan’s story because it reminds me of the charity work we do every year… I wish more of us would volunteer and help those that can’t help themselves. Charity doesn’t have to be about money sometimes a smile or a kind word can make someone else happy or hopeful… This story brought you the feel good experience you expect with a holiday story in a quick read. I give this book 4 diamonds and hope that everyone that reads this book gets into the holiday spirit…

This was a very cute story. Short and sweet.

this story was short but was still interesting. It would make a great book if it were expanded

Anja volunteer at a local homeless shelter and on her way to dinner one night with her boyfriend she has to stop to deliver something for the residents. Her boyfriend being the snob that he his shows his true colors when he attacks the dog, Mutt, who has been hanging around the shelter. After the brutal end to the relationship Anja seeks Mutts company home that night. She decides to let him stay the night and in bed that she tells the dog all her secrets, desires, and fears. Mutt isn’t what he seems. He is really Ethan, and he’s drawn to Anja. But he has secrets of his own, he just doesn’t know how to let her know what they are. When it comes time to tell her his secrets and the truth about who he is will Anja run away or will this Christmas being extra special. I loved this story. So heartwarming. I am only left with one (ok two) questions. Doris, does she ever get her purse back and does/will the ex lose his shit when he realizes who she really loves.